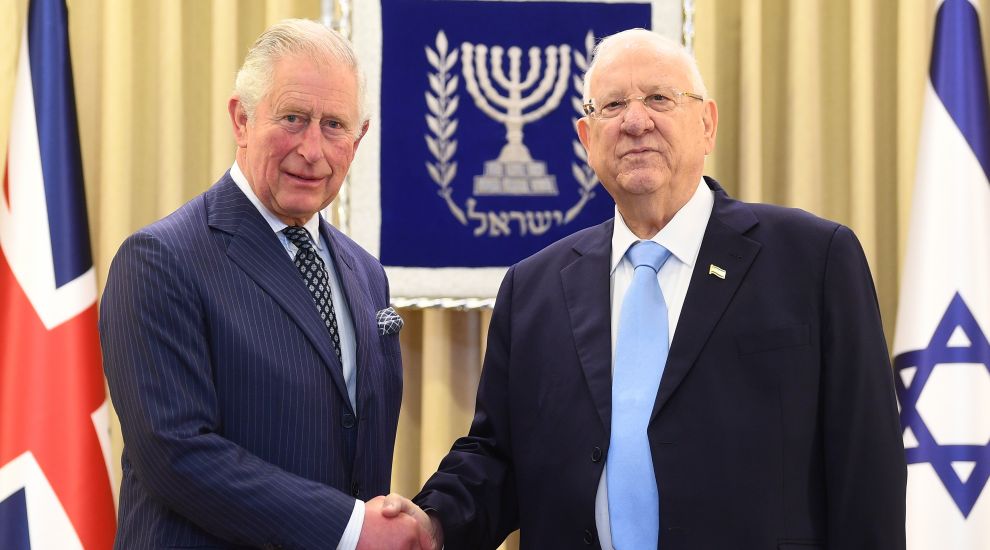 The Prince of Wales began a historic two-day visit to the Middle East by holding talks with Israel’s President Reuven Rivlin, who told him “we still expect your mother to come”.

Charles met the statesman at his official residence in Jerusalem ahead of attending a gathering of world leaders, holocaust survivors and other dignitaries marking 75 years since the liberation of the Auschwitz-Birkenau Nazi concentration camp.

The heir to the throne will give a speech at the World Holocaust Forum – the largest international event in Israel’s history – where around 40 world leaders are due to attend, including Russian President Vladimir Putin and France’s President Emmanuel Macron.

He will warn that “hatred and intolerance still lurk in the human heart”, but society must remain “resolute in resisting words and acts of violence”.

Polish President Andrzej Duda has refused to attend the event, complaining he had not been allowed to address the audience, whereas Mr Putin and other leaders will speak.

His country’s Prime Minister Mateusz Morawiecki, attending the World Economic Forum in Davos, said: “This is disrespect to Poland and to all the heroes of the Second World War who were saving Jews by not giving voice to the president of Poland.

“He should have been given (the) floor,” he told the BBC.

Mr Rivlin welcomed the prince to his official Beit HaNassi residence in Jerusalem and told him Israel “deeply appreciates” his attendance at the forum, being staged at Yad Vashem – the World Holocaust Remembrance Centre in Jerusalem, which he said was aimed at fighting racism and fascism today as well as recalling the past.

Before the talks began, Mr Rivlin told Charles: “It starts with the Jewish people but we never know where it ends. Everyone needs to be very careful.

“With this gathering we show that when we are united we can fight this phenomenon.”

The heir to the throne is making his first official tour of Israel and the Palestinian Occupied Territories – the most senior royal to visit.

The Queen has never made an official trip to Israel or the Occupied Palestinian Territories during her 67-year reign, and has not taken a long-haul flight for a number of years.

But Mr Rivlin said: “We are still expecting your mother to come.”

The president recalled how he was born as a subject of Charles’ grandfather King George VI, and how the British flag was replaced by the Israeli flag at the establishment of the state.

After almost 30 minutes of talks, Charles was given the rare honour of planting an English oak tree in the garden of the residence.

It comes 25 years after the Duke of Edinburgh also planted an oak in Israel in memory of his grandmother Princess Alice, who is recognised as Righteous Among the Nations at Yad Vashem for saving Jews during the Holocaust.

Chief Rabbi Ephraim Mirvis, in Israel for the day’s engagements, joined the two world figures for the brief ceremony.

While the planting by Philip was a reminder of “deep sadness”, the Chief Rabbi said, “This is a symbol of hope and represents the laudable aspiration you both have for sustainable development across the world”.

He expressed hope it would “sow the seeds of peace” in the region and the world.

Mr Rivlin opened the forum with a passionate speech telling the audience: “Let us not be confused, anti-Semitism does not only stop with Jews.

“But racism and anti-Semitism is a malignant disease that dismantles people and states and countries and no society, no democracy is immune to that.”

Notable absentee Mr Duda has recently been engulfed in a row with Mr Putin over reported claims the Russian leader has made, that Poland bears responsibility for the outbreak of the war.

The Polish president announced he would boycott the forum after not being allowed to make a speech.

Organisers of the fifth World Holocaust Forum, which was first held in 2005, were insistent politics should not overshadow the event.

US Vice President Mike Pence, representing US President Donald Trump at the forum, used his speech to urge world leaders to “stand strong” against Iran – a country he described as the “leading state purveyor of anti-Semitism”.

In his speech, the Israeli Prime Minister Benjamin Netanyahu saluted US foreign policy towards Iran, which included the recent assassination of the head of its elite Quds Force, General Qassem Soleimani.

Mr Netanyahu praised Mr Trump for “confronting the tyrants of Tehran that subjugate their own people and threaten the peace and security of everybody in the world”.

He added: “I call on all governments to join the vital effort in confronting Iran.”

Mr Putin, who arrived more than an hour late to the event due to a previous engagement commemorating the Siege of Leningrad, called for an urgent meeting of the five permanent members of the UN Security Council – China, US, UK, Russia and France – to demonstrate a common alliance in regards to the prevention of future conflict.

“Russia is willing to engage in a serious conversation and without further ado,” he said.