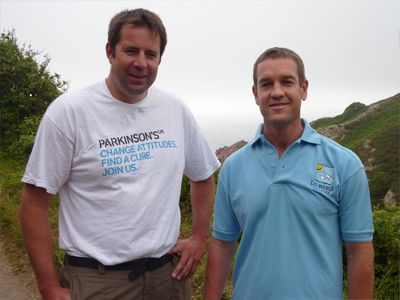 A year after losing his mother to cancer, Gareth Le Noury raised more than £2,800 for Les Bourgs Hospice by climbing to the top of Mount Kilimanjaro.

A year after losing his mother to cancer, Gareth Le Noury raised more than £2,800 for Les Bourgs Hospice by climbing to the top of Mount Kilimanjaro.

The 40-year-old took on the epic challenge with lifelong friend Jonathan Coyde, also 40, who was raising money for Parkinson’s Guernsey, The Friends of Sausmarez Park Playground and Leukaemia and Lymphoma Research.

Mr Coyde suffered from mountain sickness as they reached the last camp but Mr Le Noury, who had a stroke 10 years ago, carried on to the top.

‘It was deeply satisfying to reach the top of Kilimanjaro. It was hard, especially the last push starting at midnight and walking for 15 hours. The last bit was particularly difficult as the atmosphere has only half the amount of oxygen as it does at sea level,’ said Mr Le Noury.

‘I was gutted for Jon. He started to have headaches and showed signs of mountain sickness as we reached the last camp and was advised to go to a lower camp. This has always been a team effort and one making it to the top was far better than none; I wouldn’t have done it without Jon.’

The pair met at St Andrews Primary School 35 years ago and trained hard ahead of starting the week-long climb to the summit of the world’s highest free standing mountain starting on 10 October.

Mr Coyde, who runs his own health and safety company, said they wanted to give something back to those charities that helped their families and friends.

‘Les Bourgs would not be able to run as it does now without the tremendous support they receive, which is where I wanted to play a small part. The amount I raised was the icing on the cake; I would like to thank the generosity of my sponsors. I know my mum would have been proud of my efforts for Les Bourgs,’ he said.

The friends completed the Itex Guernsey this year and are hoping to complete the walk again next year, as well as doing Itex Jersey, and walking around Alderney, Sark and Herm.