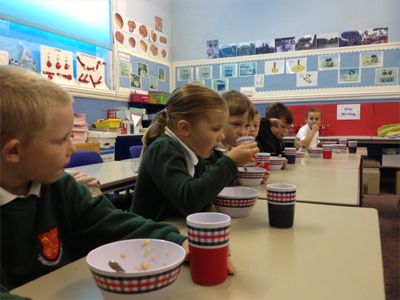 A breakfast club has been launched at Amherst Primary School, thanks to funding and hands-on support from Investec Specialist Bank.

A breakfast club has been launched at Amherst Primary School, thanks to funding and hands-on support from Investec Specialist Bank.

The pilot scheme – running on Thursdays and Fridays – enables up to 30 children to receive a healthy breakfast in the classroom before lessons begin.

It is hoped that the scheme will eventually be extended to more children and over a greater number of days.

‘Research has shown that children who come to school having eaten breakfast concentrate better for longer and that can only be a good thing in helping us to raise standards,’ said Tracey Moore, head teacher at Amherst Primary School.

‘We did a survey at the school and found that a number of children were coming in without breakfast, for a number of reasons. As a health-promoting school we felt it was an area we could develop and Investec have been fantastic in not only part-funding the scheme but also providing members of staff to help give out the breakfasts. We would struggle on our own so their help is so important.’

The pilot scheme launched this term is catering for a cross-section of the school, from reception to year six.

Two members of staff from Investec ensure that the children’s cereal bowls and juice cups are filled up and the bank meets half the cost, along with parents.

‘Something as simple as having breakfast can make all the difference to a child’s ability to learn and we recognised that we could help in this area at Amherst Primary School, where our staff already have a close relationship with the staff and children,’ said Stephen Henry, head of Investec Bank (Channel Islands) Limited. He thanked Tony Rowbotham, managing director at Montagu Evans, who has donated two of his parking spaces each week to Investec staff helping out at the Breakfast Club.

Children at the first session of the club gave it the thumbs up.

Many said the reason they came to school without breakfast was a lack of time in a morning.

Lewis aged six, said: ‘I don’t have time to have breakfast at home, it’s always a big rush.’

‘I really like having my breakfast at school, they have my favourite – Rice Krispies,’ he said.

Parents of children attending the Breakfast Club pay 25p a day, with Investec covering the rest from the funds raised through their charitable activities such as the recent Three Peaks Challenge, cake sales and raffles.