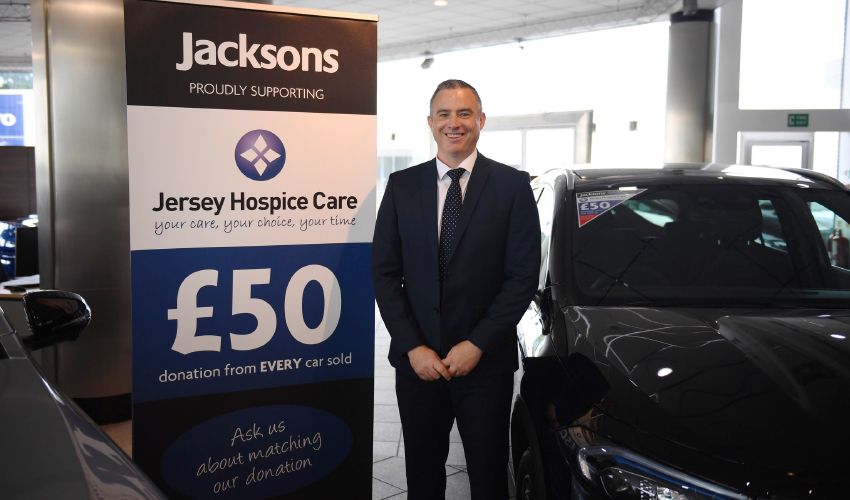 Jacksons Group, incorporating Motor Mall is delighted to have raised more than £50K to support the incredible work that the hospices in Jersey and Guernsey do.

General Manager of Jacksons Channel Islands, Andrew Searle is overjoyed with the success of the campaign so far, “We are absolutely thrilled with the amount raised in just the first four months of this initiative. We are tracking well ahead of beating our annual target of £120,000 across the two islands.

“We have had incredible support from our customers to this campaign with islanders donating over £10,000 and the rest coming from our car sales donations. Every penny of the £50,115 we have raised so far will go directly towards supporting islanders and their families.

At the beginning of July the local motor dealership pledged to make a monetary donation for each and every vehicle sold to provide ongoing support to Jersey Hospice Care and Les Bourgs Hospice in Guernsey.

The Group also invited customers to match it with their own donation with all the money going directly towards the provision of specialist support for those with life limiting illnesses in the islands.

They hoped the donations would exceed £60,000 per island per annum, a figure which roughly equates to the annual cost of a nurse on the In-Patients Units but have almost reached this figure in just four months.

Mike Palfreman, CEO at Jersey Hospice Care said, “We are absolutely over the moon at the way this partnership has started, both in terms of monies raised but also the awareness raised locally. The Jacksons’ team has engaged with Hospice with huge commitment and enthusiasm, and we are really excited at how we can develop this even further”

Jo Boyd MBE, Director of Les Bourgs Hospice added, ““We have been overwhelmed with how successful this fundraising campaign has already been which is testament to the dedication of the Jacksons team in their commitment to supporting Hospice care, plus the generosity of the public through their additional donations. We are incredibly grateful to everyone involved and thank Jacksons for choosing us to be the beneficiary of this inspired initiative”.