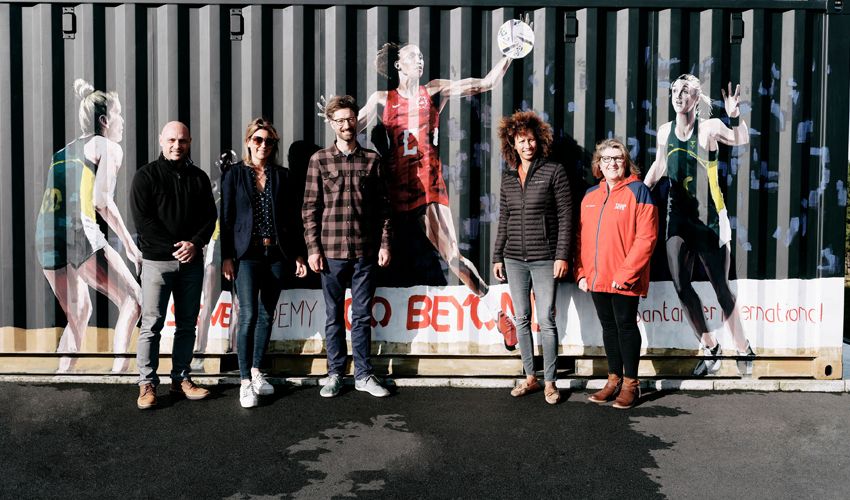 The mural, painted by Ben Robertson, aka, Bokra, was commissioned by Santander International as part of its support for the Strive Academy and Jersey Netball.

This is the second year Santander International will be sponsoring Team Jets, Jersey’s top county netball team and the bank has just announced a new three-year deal to sponsor the Jersey Netball Association.

Linda Andrews, President of Jersey Netball, said: “The mural is a celebration of sport in Jersey and Serena is an inspiration for young athletes, and especially for young women athletes. We would like to thank Santander International for its continued support which allows us to invest in our players and their development.”

Originally spotted by Linda, Serena, who attended Le Rocquier School, has earned over 100 caps playing for England from 2008 until she retired earlier this year.

Serena said: “We are honoured to follow the British and Irish Lions on the Strive Academy mural. Netball is a fast-growing sport, and the mural is a good reminder of the diversity of sport played in Jersey and the opportunities for Islanders to get involved.”

Over 400 athletes a week over the age of 11 use the Strive Academy to train, and in its first 12 months, the Academy welcomed over 3,500 school children to use the specialist facilities.

James Pountney, CEO, Santander International, said: “Sport plays a key role in our physical and mental health and Santander International is committed to supporting sporting opportunities for Islanders through the Strive Academy. We are delighted to extend our sponsorship of netball on the Island which will help more individuals pursue excellence in netball.”

The Strive Academy mural is located on the container next to the Strive gym in St Peter.

Ben Harvey, Managing Director, The Strive Academy, said: “Thanks to the continued generosity of our sponsors we can bring world class sports facilities and training to more Islanders. The Strive Academy supports over 14 sports, helping athletes follow their dreams to the highest level, eventually creating more sporting legends like Serena.”