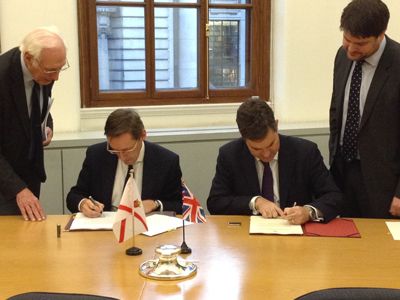 The Chief Minister, Senator Ian Gorst, has today (22 October 2013) signed an intergovernmental agreement on automatic exchange of tax information on behalf of Jersey with the UK Government in London.

The Chief Minister, Senator Ian Gorst, has today (22 October 2013) signed an intergovernmental agreement on automatic exchange of tax information on behalf of Jersey with the UK Government in London.

Adopting the FATCA-style agreement with the UK is one of a series of international commitments made by the Island in recent months to improve tax transparency.

The Chancellor of the Exchequer, Rt Hon George Osborne MP, said: “The UK has been leading the way in pressing for a new global standard of tax transparency and automatic tax information sharing. This agreement builds on the progress already made and sends a clear signal to anyone thinking they can evade their responsibilities: the opportunities to hide your money offshore are disappearing and the net is closing in.

"We welcome the agreement with Jersey which demonstrates our shared commitment to tackling tax evasion. The agreements will enable HMRC to clamp down further on those individuals who seek to hide their assets offshore.”

Senator Gorst said: “This agreement once again demonstrates our long-held commitment to international cooperation on tax matters. It sends another clear signal that Jersey has no need or desire to tolerate tax evasion or aggressive tax avoidance.

“Our relationship with the UK has spanned many centuries and is greatly valued by the people and Government of Jersey. As well as our innumerable cultural, social and historical ties, the UK is our closest economic partner.

"In signing this agreement we are securing this vital relationship while reinforcing our international reputation as a transparent and well-regulated financial services centre.”