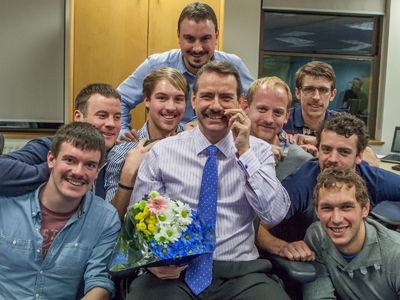 Sixteen men from KPMG’s Guernsey office spent the last month working on their Mos alongside colleagues from around the globe and have between them raised almost £150,000.

Sixteen men from KPMG’s Guernsey office spent the last month working on their Mos alongside colleagues from around the globe and have between them raised almost £150,000.

Dan Le Huray, audit assistant and Movember organiser, set up a month of fundraising and awareness events including a presentation from the local charity Male Uprising Guernsey (MUG).

“Enthusiasm for Movember has been great over the past few years and this year was no exception.  However, I wanted to take this opportunity to widen the focus from the national campaign to acknowledge what MUG is doing to raise awareness for prostate, bowel and testicular cancer in Guernsey.

“The lunchtime presentation was a great success and I think everyone that attended took some valuable messages away with them”, said Mr Le Huray.

MUG founder, Trevor Kelham said that KPMG’s enthusiasm and support for the local charity was brilliant.

“It is so important for men to be proactive and confident in seeking medical advice at the earliest juncture if they are in any way concerned about their health.”

The initiative closed with a final fundraiser in the office at which staff voted for the ‘Mo of the Month’, a title claimed by executive director Rob Hutchinson in a closely fought contest. The total raised locally was more than £1000, which was later matched by the firm.

Movember is a global event where men all over the world grow a moustache throughout the month of November to raise money and awareness for male specific cancers and men’s health in general.