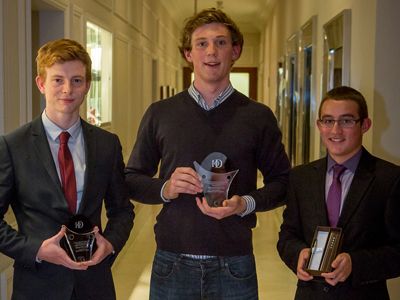 Students who took part in the IoD Jersey’s Work Shadowing Initiative this year were recognised for their hard work recently.

Students who took part in the IoD Jersey’s Work Shadowing Initiative this year were recognised for their hard work recently.

At a prize giving event held at the Grand Hotel on Thursday 24th October, attended by over 170 students, business representatives, community leaders, parents and teachers, certificates and awards were presented to the 49 students who took part in this year’s scheme, which was sponsored by KPMG.

Each year, the students’ CVs, letters of applications, interviews and reports of their work shadowing experience are assessed for two main awards. This year, the overall prize was awarded to Samuel Lumborg from De La Salle who shadowed Susan Turnball Deputy Chief Medical Officer of Health, whilst the highly commended student was Robert Winspear from Victoria College who shadowed Siobhan Riley at Carey Olsen.

Both Samuel and Robert were presented with an engraved glass award by The Bailiff and will receive an all-expenses paid day trip to London in 2014 to attend the IoD Annual Convention which last year was held at the Royal Albert Hall, previous speakers have included the prime minister of the day, Bill Gates and Sir Richard Branson.

Talking about winning the top award, Samuel said: “The IoD Jersey Work Shadowing Initiative was an excellent opportunity, and one that I would encourage other people to sign up to. It has given me valuable experience for the future, which will be especially relevant when I attend university.  As I want to go into medicine, being able to shadow a director in my particular field of interest, ask pertinent questions and visit all the departments in public health, I feel I got lots out of the scheme. I was overjoyed, but surprised when they called my name out as the winner of the overall scheme.”

Alexandre added, "The Initiative offered me the opportunity to see a charismatic leader of a well-respected local accountancy firm in action. For me personally, I am interested in pursuing a career within the finance industry in Jersey and don’t want to delay this by going to University first. I gained an insight into the role of each department and how they work together to contribute to the organisation’s success.”

The Jersey branch of the IoD has been running the Work Shadowing scheme for a number of years, supported by Careers Jersey. It provides a means for predominantly Year 12 students to experience a week shadowing a senior Director in order to get a taste for a business career.

“In the current challenging economic environment it is more essential than ever for the youth of today to be attuned to the realities of the workplace as they look forward to pursuing their career aspirations.  In what is an established scheme with exceptionally high standards, it was inspiring to see firsthand the ambitions and potential of the successful students. The judges were impressed by the calibre of all the students and their adaptability and application of knowledge throughout the placements. Well done to all.”

The 2014 scheme will get under way again in January, when presentations will be held for Sixth Forms at schools across Jersey.