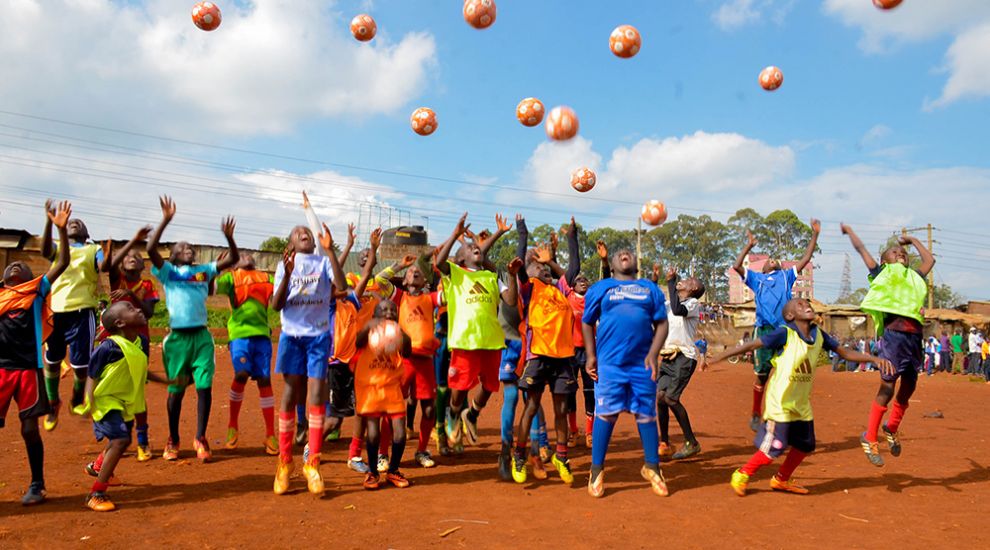 Suntera Global have sponsored 80 footballs, which have been handed out to four organisations in Rwanda and Kenya as part of Jersey 2 Africa 4 Football’s Bounce Back Campaign.

The campaign aims to improve young lives in Africa both on and off the field and help them bounce back from the effects of the pandemic through educational play and delivering vital Covid-19 and mental health support.

The campaign is a collaboration between Nairobi-based ethical football manufacturer Alive and Kicking and the Jersey 2 Africa 4 Football Foundation, which was formed in 2013 and became a registered charity in November 2020. One of the foundation’s Directors is Claire Machin, Group Director and Jersey Head of Private Wealth at Suntera Global, who has been heavily involved in the campaign since the very beginning.

Claire commented: ‘Jersey 2 Africa 4 Football is a cause very close to my heart and I am so proud of what we have achieved over the past several years. We are delighted to support the Bounce Back campaign which will not only provide a safe environment for the children to play in and enjoy, but also help them improve their knowledge and behaviour around health and contagious diseases.

‘It has upskilled hundreds of local sports coaches so they can deliver vital education to thousands of young people on a daily basis and supported the Alive and Kicking Kenya employees and their families. Above all, it has given children the tools and opportunities to learn through football and strengthen their emotional wellbeing as they emerge from lockdown and isolation, which has been a difficult time for everyone.’

Delivery of the footballs took place in two phases between November and the new year and was organised by Jersey 2 Africa 4 Football founder and former Jersey FA president, Ricky Weir.

Ricky said: ‘As we approach our eighth birthday as an organisation, we are delighted to be able to support these communities once again and we would like to say thank you to Claire and to Suntera Global for their generosity and invaluable support in helping us roll out this campaign in what was an undeniably challenging year. The impact has been significant as you can see the joy and gratitude felt from the recipients upon delivery of the footballs which is truly rewarding.

‘The impact is felt not just by the children and coaches in these areas, but also the Alive and Kicking factory where the footballs have been produced. This initiative has supported their employment during the past few challenging months in some of the poorest regions of Nairobi and ensured that they are able to support both themselves and their families with a roof over their head and access to food and other vital services.’

Overall, the campaign has raised sponsorship of just over £7,500 so far, which has produced 500 footballs, of which over 400 have now been distributed. The estimated overall impact of these football donations is just over 130,000 hours of educational play created, over 22,000 young people given access to educational play, and it supports an Alive and Kicking employee and an average of five dependents for thirteen months.

Headway 10k back on the road again