Thanks for all the Kindness! 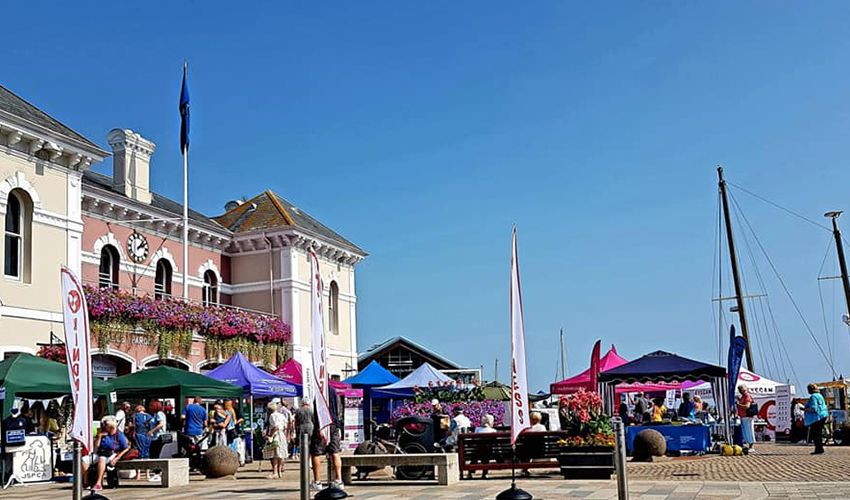 Thanks for all the Kindness!

Organisers and all those involved in the fourth Jersey Kindness Festival, which was held recently at St Aubin’s Harbour, want to say a HUGE ‘thank you’ for all the support.

The Festival featured around 30 local charities, an Affordable Art Show and loads of fun for all the family. It was a great success, with many hundreds of people enjoying the day in the sunshine on the harbourside.

Brian Clarke, the founder of Kindness Connects and the organiser of the Jersey Kindness Festival, was delighted that the Art Show, which featured paintings from himself and other local artists, raised £750 which will be distributed to some of the charities involved in the festival.

‘We are so grateful to everyone who made the 2021 Kindness Festival such a success. The concept of the festival is to bring together people who on a daily basis show kindness to others, and to emphasise the importance of kindness in our world. Because of the COVID19 pandemic and lockdowns, for many of the small charities who took part, it was the first time in a couple of years that they were able to get out and about and chat to the public about what they do.’

‘We had such fun on the day, with all the charities bringing something fun and interesting to the event. It was a joyful friendly atmosphere, with lots of families, music, arts and crafts, competitions and quizzes. Many interesting conversations were enjoyed and many of the charities were able to raise much-needed funds for their cause,’ Brian said.

However, it’s what the charities got out of the day that is really important, so Brian has asked them to share their thoughts…

Janine Coxshall from Parkinson’s Jersey said they were delighted to be at St Aubin for the festival.

‘We were so pleased to have joined the festival and really enjoyed the atmosphere with great weather and everyone was so friendly. We were really pleased how smart our Stall looked with our new Banners and T-Shirts which were supplied and donated to us from Mailmate, Jersey. Such a kind gesture due to a connection through Parkinson’s!  We were able to give out books and leaflets on Parkinson’s and offer information on the support and activities we are able to offer our members.’

Ro Cox from Therapy Dogs Nationwide, who offered free pats with therapy dogs all day, said they were thrilled to be part of the 2021 Kindness Festival.

‘Our volunteers and their dogs had an amazing day meeting so many people. There was such a fabulous atmosphere helped along by great live music. Our dogs were ‘well patted’ and helped spread the word about the wonderful job they do going into residential and care homes as well as primary and secondary schools, along with other places.’

The Kindness Festival proved to be a very successful event for the Jersey Ostomy Society, as a representative explained…

‘It allowed us to reach a wide cross section of the public on a personal basis and provided an opportunity to raise awareness of our charity’s objectives. We were able to explain our aim to provide support and education to those who have undergone, or are about to undergo urostomy, ileostomy or colostomy diversions, together with their families, friends and carers, and to adjust to life with a stoma after such diversions. It also allowed us to engage with other charities to encourage working together in the future towards a common goal. And it was a great opportunity for us to display our giant inflatable colon, which visitors found both informative and fascinating.’

Jersey Cancer Relief also wants to thank everyone for the lovely atmosphere at the Festival:

‘Our stand was well visited, especially as we had a face painter.  We were able to engage with the public and may even have found a new volunteer visitor for the charity from this event.’

Sue Frost from ABC (After Breast Cancer) said the Festival was an opportunity for them to hear from many people affected by breast cancer and they also spoke to several visitors with connections to their own charities back in the UK who were keen to share ideas.

‘One lady had brought over from Birmingham a bag of pens for us and details of free goodies to explore. We have gained several new members and made some useful contacts to help us in the future. It’s such a great opportunity to raise awareness of checking for signs of breast cancer too,’ Sue said.

Alex Wiles, manager of Jersey Mencap, said they all had a great day, based around a community art project.

‘Taking Part Making Art hosted a stand whereby members of the public could come together to create a vibrant piece of artwork. The project caught the eye of many and in particular with children who were keen to draw, cut and add their own creation to this collective piece.  We also welcomed Jersey Mencap members who added their own touch, so every part of the picture tells its own story.

The end result is a large piece which is fun and colourful and a real crowd pleaser.

Jersey Mencap runs Taking Part Making Art which offers a programme of art and textiles sessions for adults with a learning disability.  Art Tutor Michelle Le Cornu was on hand at the festival to oversee the piece coming to life and the finished piece is currently on display in the Taking Mart Making Art art room,’ Alex said.

Pam Evans from DriveAbility Jersey, who brought a demo adapted car to the Festival, also commented on the great success of the day.

‘People gained much more awareness of the work we do, many of them saying they had never heard of us. We have even gained some clients, who did not know they could possibly learn to drive again.  The car proved to be a great attraction, people were fascinated to hear that people could drive without the use of their legs or one of their arms! I found it successful meeting up with other charities and sharing experiences & realising how we can work together.’

Denise Carroll, the founder and co-ordinator of Milli’s Separated Families, said their volunteers thoroughly enjoyed the day and were thrilled by the crowds who attended.

‘Due to such a great response from people attending the event we ran out of teddies/soft toys by midday. Volunteers said people were very interested to learn more about the charity and volunteering and we gave out plenty of information leaflets.’

Monique Le Monnier from the Jersey Hedgehog Group said they loved being at the festival.

‘It was lovely to meet interested folks, old and new, including someone involved in hedgehog care in the UK. We were also able to raise valuable funds, the first time the stall has been out since the first lockdown.’

Paul Aubert from the Royal British Legion said it was a great day for everybody who participated and all who visited. They offered ‘nerf’ target shooting which proved popular.

‘We were able to speak to a few people about gaining branch members and the help we offer to those in need, and we were delighted with another outcome. We did not intend to use it as a fund raiser, but as it happens, due to the kindness and generosity of all who attended, we received a total of £265 on our stand from donations which is outstanding,’ Paul reported.

Members of the Amnesty International Jersey Group were encouraging visitors to the Kindness Festival to write a postcard to prisoners of conscience who are held in prison. Some of their members reported on a great day…
‘I am delighted to say we did 179 postcards which means that we were running at a rate of about 30 postcards an hour, or an average of a postcard every two minutes. That is a grand collective effort of outreach from Amnesty International Jersey Group to our three prisoners of conscience suffering in the jails overseas.’

‘The combination of our manuscript messages and the Jersey stamps and post mark [and a Jersey view too] all make up an impressive postal document which we hope our prisoners will read several times over in the coming weeks in their jails, to see we are campaigning for them. The arrival of several smart postcards from Jersey over coming weeks will enhance the respect of jailers and officials for the status of our prisoners of conscience.’

Debbie Jeffries, Fundraiser for the Sanctuary Trust, who ran a Lucky Dip and a yoga session, also enjoyed the day.

‘We met some lovely people and raised awareness about our cause and our next big fundraiser, Sleep Out for Sanctuary Trust,’ she said.

Nicki Kennedy founder of the Aureole Choir, which was one of the musical groups taking part during the day, said that the whole event ‘provided much joy’. The choir was set up during lockdown, not just to bring singers together online but also to raise funds for local charities.

‘I was finally able to put names to faces of so many other charities that we’ve worked for, and we got enough of a crowd to collect £144 which we’ll donate to Healing Waves and WetWheels as they are our current charities we’re supporting with our sea shanty video which is on www.aureolemusic.co.uk ! It’s also extremely rare for us to actually sing together in-person… still a novelty … so it was a wonderful, positive experience for our members,’ Nicki said.

‘The event was a great opportunity for members of the public to learn more about what we do, and we had lots of interest in our free upcoming courses supporting mental health. It was also a great opportunity to see the important work other charities do and to make connections for future partnership working.’

The Jersey Fairtrade Island Group were delighted to have contributed to the event and they enjoyed the many contacts that we made through the day:

‘We certainly achieved our mission to increase knowledge and use of Fairtrade products and we had fun in our banana costumes and raised money for Oxfam through the sales of chocolate and other Fairtrade treats. Fairtrade was very pleased to have the opportunity to focus on the impacts of climate change on very poor farmers around the world who need our support to feed their families and to continue producing coffee, tea, bananas and chocolate for our consumption,’ said Tony Allchurch.

Jane Allchin, General Manager of CRY Jersey said they were very pleased to be involved in the Kindness Festival and made some very positive contacts:

‘Lots of people said they had heard of CRY, which is always good, others offered donations for our shops. We also raised some funds on our stall, which we were pleased with.

‘People seemed to enjoy having the opportunity to have a chat and to write a thank you note to someone who has been kind to them. It was really interesting to see how difficult people found it to write something that they like about themselves in order to enter our competition to win four tickets to the zoo.  The winner of the competition was Murray Norton whose message was 'I am positive and want to spread the message that you can be anything you want to be and achieve anything.’