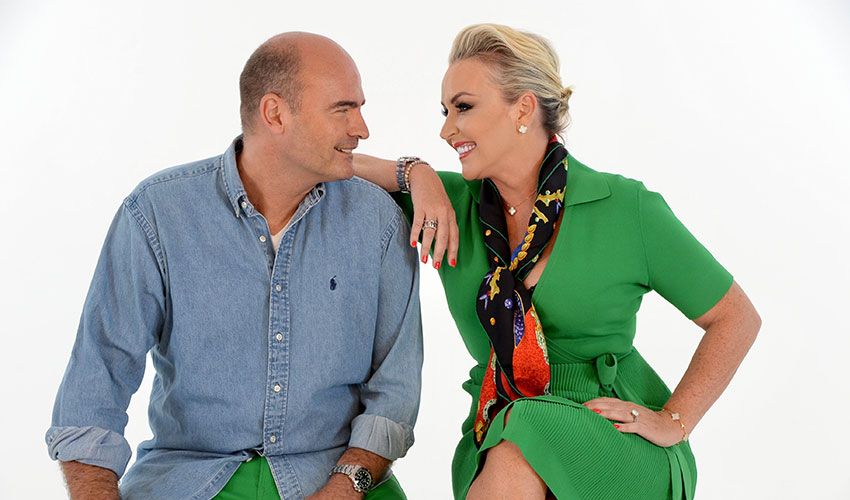 Real housewives of Jersey TV star Tessa Hartmann has paid tribute to her artist husband Sascha in a powerful short film about her cancer journey.

Mum-of-four Tessa thanks him for being there every step of the way through her treatment for breast cancer.

The couple, who have just celebrated their 25th wedding anniversary, talk about the impact the disease had on both their lives in an honest and heartfelt conversation.

The film was shot shortly before Tessa and Sascha renewed their wedding vows this summer in a romantic ceremony. They were joined by their closest family and friends in the garden of their home in Jersey.

Now the couple are sharing their story to support Cancer Research UK’s new Play Your Part campaign, which aims to save lives by raising awareness. They hope to encourage people to support the vital research that will beat the disease through donating, fundraising, volunteering or pledging a gift in a will.

And Tessa, who is fit and well after being treated for the disease in 2017, believes being open about her own cancer experience will encourage others to get any unusual changes checked out by a doctor.

Tessa, 52, said: “Early detection can be a life saver. Without research, I might not be here.

“I’m hungrier for life in so many ways because of what I’ve been through. Some people are not as lucky as me but by God, it would be a sin for me not to make the most of every day. And I am grateful every day to have my husband Sascha in my life. That may be a bit too much of a compliment for him but it’s true.

“Sascha and I first met on a skiing holiday in Switzerland, got engaged after six weeks and married after six months. We have been through so much together and there have been some bumps on that rollercoaster over these 25 years.

“But the summer’s day we renewed our wedding vows felt almost overwhelming. It was all the more special and emotional because of everything that has happened. I had to pinch myself. I was there surrounded by all the people in my life who I love. Sascha and I both felt we were lucky to be alive and that was something to celebrate.”

She’s the founder of the Scottish and Jersey Fashion awards.

But she is probably best known for appearing in the ITVBe show, The Real Housewives of Jersey where seven women showcase their lifestyles.

The stunning landscape of Jersey is where Tessa and Sascha, 41, and family moved to from Scotland five years ago. It provides the backdrop for the glamorous show which premiered in December last year. Filming has just ended on the second series which is due to air this Christmas.

But Tessa recalls vividly how challenging life was in the early days after being diagnosed with cancer in spring 2017. A year earlier, her husband Sascha had battled life threatening sepsis after surgery to have his gall bladder removed. And just as he began to fully recover, Tessa visited the doctor after feeling what she describes as “thickening” in her breast tissue. Waiting for the results of an ultrasound and biopsy was tough.

Tessa said: “The not knowing and waiting for results of tests was actually the worst part.

“Once I knew I had cancer then it was almost easier. I’m a project person so I was like, ‘right, this is the project and this is the timeline.’ I didn’t want the children to see me in a bad way so I worked really hard to try to be as strong as I could for everyone else’s sake. The children were still so young.”

Tessa had a mastectomy operation with reconstruction and six months of chemotherapy. When tests showed the cancer had spread, she also had a second operation to remove lymph nodes from under her arm.

She remembers one heart-breaking conversation in particular with her son.

Tessa said: “One of the most awful memories I have is putting Zach to bed one night and he said to me, ‘mummy, I just have one question, are you going to die?’

“Zach is the youngest of four, the baby of our family and it was difficult. I worried about what all my family were going to do during this process and how they would cope. As a mum, when you get cancer it becomes less about you and more about the entire family.

“But my girls were brilliant. They were like two mums and would step in to cook dinner and keep things going on any day when I couldn’t get out of bed.

“Through it all I kept this mantra in my head to, ‘get up, dress up, show up and never give up.”

Tessa did not publicly reveal her illness until close to the end of cancer treatment, giving herself and her family the chance to adjust to the news first. But vowing to tackle the disease with humour, Tessa named her new breast ‘Barbara’ – after actress and singer Barbara Streisand - and her old breast Britney joking it was, ‘a bit 90s and in need of a lift.’

She said: “You need a bit of lightness and a lift through that cancer journey.

“As one in two people are going to get cancer*, we need to start talking about it with a different language that’s less frightening. That’s one of the reasons I didn’t want to talk about it for such a long time. It was just too much.

“But when I started talking about cancer it was an unbelievable thing as strangers contacted me. I see it as being all of our jobs - every person who has been touched by cancer - to talk about it, to share it. Cancer is relentless but so is research and I think together we will beat cancer.”

In Jersey, around 593 new cases of cancer are diagnosed each year. The most common cancers are breast, bowel, lung and prostate.

Thanks to the generosity of its supporters, Cancer Research UK’s work into the prevention, diagnosis and treatment of cancer has been at the heart of the progress that has seen survival in the UK double in the last 40 years.

The strong relationship between Jersey and Southampton is crucial for the many patients from the island who are treated in Southampton. It’s considered the local hospital for cancer treatment, as well as the closest hospital for clinical trials, as there is no research environment in Jersey.

The Jersey fundraising committee maintains a close working relationship with the team at Southampton, ensuring funds raised in Jersey have a tangible benefit to islanders.

Lynn Daly, Cancer Research UK spokeswoman for the Channel Islands, said: “We’re  grateful to Tessa and Sascha for their support.

“COVID-19 has hit us hard, but we are more focussed than ever on our ambition of seeing 3 in 4 people survive their cancer by 2034.

“That’s why we want to harness the ‘people power’ of our incredible supporters, because the progress we make relies on every hour of research, every pound donated and everyone who gets involved.

“So, whether people give £2 a month, sign up to Race for Life, volunteer at our shops or pledge to leave a gift in their will - with the help of people across the Channel Islands, we believe that together we will beat cancer.”

Cancer Research UK was able to spend nearly £30 million in Scotland last year on some of the UK’s leading scientific and clinical research.

Play a part in supporting life-saving research at cruk.org.

We're back! Calling for local Superheroes to Find Your Power!