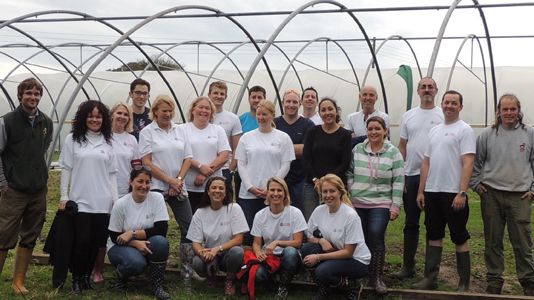 Volunteers from UBS recently spent two days removing an old polytunnel at Durrell’s organic farm and clearing the site in preparation for the construction of a new polytunnel which has been donated by the firm.

Volunteers from UBS recently spent two days removing an old polytunnel at Durrell’s organic farm and clearing the site in preparation for the construction of a new polytunnel which has been donated by the firm.

35 staff from UBS took part in the work to prepare the site. They also helped with a range of tasks on the organic farm that included harvesting fruit and corn and spreading compost to ensure the soil is ready for next year’s crops.

“The volunteers from UBS achieved an amazing amount of work in just two days,” said Stephanie Moore of Durrell.

“Everyone really seemed to enjoy the work and they’ve made a huge contribution to ensuring the organic farm is ready for next year. The farm is extremely important to us as 80% of the food needed to feed our animals in the summer months, is grown on the farm.”

“UBS has supported Durrell for many years as one of the company’s partner charities in Jersey. As part of the support we provide, volunteers take part in an annual two or three day project,” said Sue Holland, Senior Trust Officer at UBS.

“Last year, UBS staff helped clear the Orang Utan island in preparation for its refurbishment and we are already looking forward to finding out what next year’s project will be.”