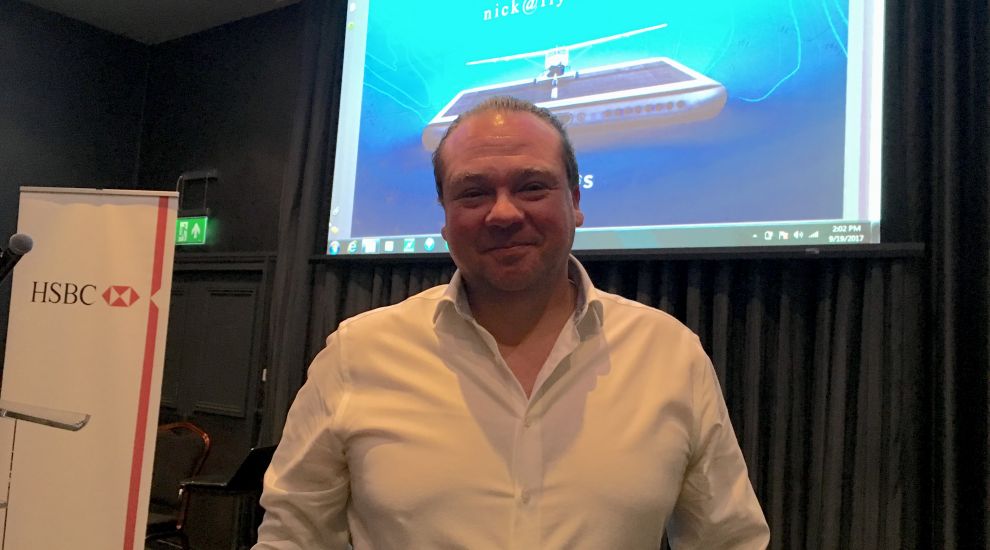 Waves – a new on-demand air taxi service has recently launched in Guernsey in the Channel Islands.

Most of us would fly privately if we could. Not only is it quicker and less hassle, private hangars and airfields also offer more choice to your final destination – direct to, for example, Oxford, rather than into Heathrow, then the Underground, and finally an hour-long train journey.

Guernsey-based start-up, Waves, aims to change the way we travel with its on-demand air taxi service for both passengers and freight.

Within months of moving to Guernsey, Waves CEO Nick Magliocchetti realised that air travel was among the islanders’ biggest frustrations. Travelling between the Channel Islands is one of the most expensive per mile flights in the world and with only one scheduled airline now operating, the prices are rising and the number of flights reducing. So, Nick set about using his business experience and passion for technology to develop a solution.

The result is Waves; a technology-led, on-demand air taxi service for both passengers and freight using Cessna Caravans. Phase one, which launched last week, will operate between the Channel Islands with plans to expand operations to northern Europe and southern England in 2018.

“Over the last decade, the number of people travelling inter-island has fallen by 100,000, we want to recapture those people – not compete with existing operators. There is definitely demand beyond the existing offering, and Waves is already living proof of that. We get dozens of requests every day from islanders wanting to either travel with us or to arrange the transport of freight,” says Nick.

By starting locally, Waves has demonstrated that this new model of air travel works and the technology is sound. It has now applied for a wider licence which will allow it to offer services across the UK and Europe, scaling up its operation to meet demand.

It is also launching on equity crowdfunding site Seedrs [https://www.seedrs.com/waves] in order to expand its operations across the UK.

“We’re in the final stages of testing our booking system and security app. During our beta-phase, we’ve been testing the entire customer experience from booking, check-in, boarding and disembarkation, using family and friends to ensure that it meets our exacting standards. The positive feedback from our first passengers has been amazing” says Nick.

“The Channel Islands are the perfect place to launch what is a ground-breaking idea when it comes to air travel. Listing with Seedrs will allow us to grow and subsequently offer our tech-led solution to other jurisdictions across the world.”

Waves is seeking £500,000 investment in order to expand its licensing area, recruit more pilots and fly to more destinations. Waves will also look to expand the team as volume increases, and is considering future plans to purchase a hangar to reduce the storage cost of their fleet, further driving down costs.

Waves is able to offer air taxi services at a mere fraction of the cost of other operators by ensuring its business model is effective without impacting on customer experience or passenger safety. It leases its fleet of aircraft, uses the right type of aircraft for the trip, minimises fuel requirements, and is working to reach deals with established commercial airlines, in order to provide great customer service at a competitive price.

By deploying state-of-the-art technology to manage things like bookings, security, and check-in, Waves is able to keep costs, time, and hassle to a minimum.

This means passengers can skip the usual queues, traffic, and parking costs that come with big airports. Using proprietary technology to manage every aspect of the process means Waves can cut a typical 100-minute travel experience between Guernsey and Jersey down to just 40 minutes!

“We hold an Air Operator Certificate and are therefore subject to the same safety, operation and security measures as the other commercial operators in the Channel Islands,” says Nick.

Waves uses a fixed-pricing model to ensure customers aren’t financially penalised for last-minute bookings. They can book a flight on-demand, buy an empty seat on an existing flight or arrange their own flight to suit their dates, times, and destination.

“’On-demand’ means that we respond to the needs of the market and/or the individual. There’s no schedule. We’re reinvigorating the way people make flight bookings and how they’ll think about their air transport providers in the future. Our solution is to empower people to book flights through their phone, tablet or online and then to travel at a time they want,” explains Emy De La Mare, Head of PR & Marketing at Waves.

An air taxi service might sound like an extravagant idea, reserved for the rich and famous, but it is actually helping ease the burden on airports around the country. The top 10 busiest airports in the UK, for example, are the main flight hubs for around 225 million people. Yet, the UK is home to 879 airfields.

As Waves’ air taxi service is already operating more efficiently than standard commercial flights, they are already lowering emissions. With the data collected they hope to further improve the pilot’s flying efficiency, improving fleet efficiency and becoming carbon neutral by 2020.