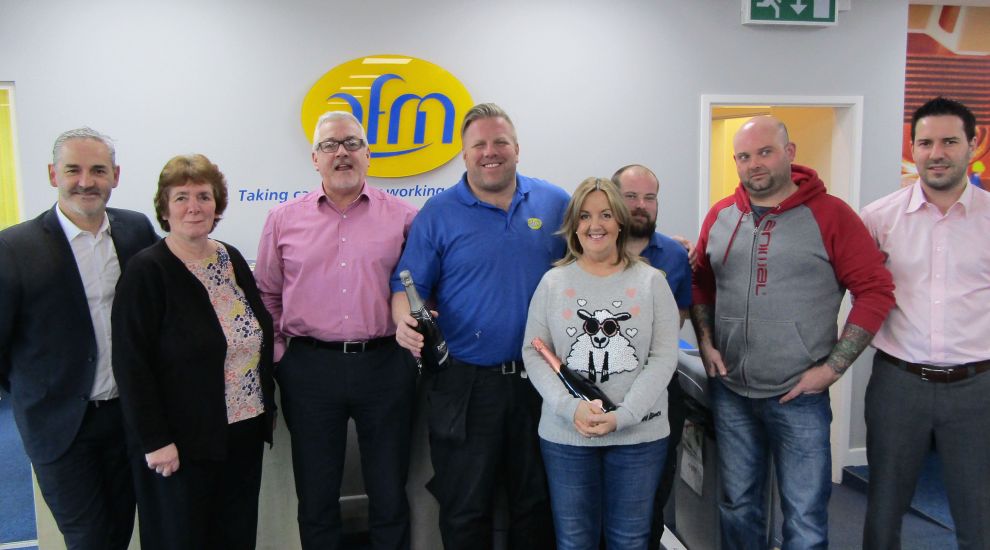 Staff at AFM in Jersey and Guernsey have lost more than 13 stone in a charity weight loss challenge.

Each year, the facilities management company chooses a charity in each island to support. The challenge was the first fundraising event held in aid of Grow Limited in Guernsey and Les Amis in Jersey, both of which support people with learning and other disabilities.

‘This has been a brilliant challenge, which has helped two super charities, and was a great incentive to lose some weight after the Christmas and New Year festivities. There was great camaraderie between the two islands, which competed to try to lose the most; between 27 of us, we lost 185lbs. Well done to everyone who took part and supported each other to stay on track,’ said Karen Girdlestone, AFM’s commercial manager.

Every participant paid a joining fee and AFM made a donation for every pound in weight lost. Anyone who tipped the scales the wrong way at the weekly weigh-ins had to pay a penalty.

The biggest loser and overall winner was Lee Taylor from Guernsey, who lost 25lbs and beat his winning weight loss from last year’s challenge by two pounds.

‘I ate sensibly, gave up the alcohol intake and did regular workouts through the month, which all aided the weight loss. I am delighted with the results and do intend to try to be good moving forwards,’ said Mr Taylor.

In second place was Michael Le Gallou from Jersey, who lost 21lbs. Ms Girdlestone and Katharine Hall, from Jersey, were the leading women having each lost 8lbs

‘With the Christmas and New Year binge it was a great incentive to not only lose some weight, but help to raise funds for Les Amis. It has been fun and having my fellow colleagues all supporting each other has made it easier to stay on track,’ said Ms Hall.

Overall, the scales tipped in favour of AFM’s Guernsey office with a total weight loss of 99lbs. Jersey recorded an 86lb overall weight reduction, although Jersey won by 0.5 percent in terms of percentage of total weight lost.

‘I feel so much better for the weight loss that I have decided to continue with this healthier regime and hope to lose even more weight. More importantly, our chosen charities have benefited from the efforts we all put in,’ said Ms Girdlestone.