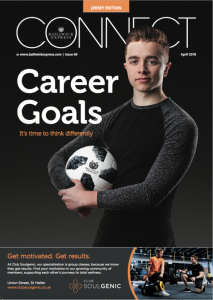 It’s a fine line to tread. A bit of ‘down-time’ is essential for everyone, so if your son spends another hour playing FIFA on the PlayStation - or watching someone else doing it on YouTube - that’s his way of switching off and resting. Right? If you say it often enough, it might even become true. But rather than cursing the tech distractions which parents and their children now have to navigate through, what about going the other way and embracing them? In a world in which the answer is always “more technology” - now what was the question? - our idea of ‘proper’ career choices for our kids are being re-defined. Law, Accountancy, Journalism (go on, give it a try)....professional ‘You- Tuber’?

One local family has opened its eyes to the way the world is going, and opened its doors (virtually, of course) to more than four million followers around the world, all of which adds up to a decent amount of advertising revenue for Chris MD, allowing him to put traditional career plans on hold, and even provide jobs for others in his family.

His story is on page 35, and it just might make you re-define your career goals, and re-assess your assumptions on what is a ‘normal’ way of earning a living. The bottom line is that if you are passionate about something, and have a real talent for it, success will follow, which is how Chris MD has become one of the island’s biggest exports.

So, next time your son asks for FIFA-time, or tries to show you something he is watching on YouTube, pay a bit more attention - it’s a timely reminder that one of the beauties of the fragmented, disjointed, ‘always-on’ digital life we now lead is that opportunities are everywhere, and barriers rapidly fall away - why shouldn’t a young lad from Jersey promote football videos to millions of his peers across the globe? Digital does that for you.

It’s something to keep in mind when you read the lead feature (page 5) in this month’s edition, which looks at the market for high-end property in the island. Jersey has long been a magnate magnet, but that market is changing, and the island is having to adapt - we take a look at the effect those changes are having on some of the island’s best properties (you know, the ones you point out to friends and relatives who come over to visit, as you drive past.)

While we’re on the subject of the world’s wealthy, have a look at the review of the Bailiwick Business Academy on page 10. There were four finalists, and we think at least three of them will either get investment, or mentoring, from our panel of private investors. Either way, taking part in the Academy could be a big step towards the sort of success currently being enjoyed by Chris MD, and perhaps even the keys to the sort of property mentioned above. Good luck to them all.