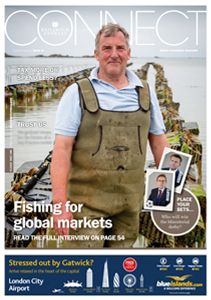 When we launched Connect three years ago, we said it would tell the stories of the island’s business community. We said it would carefully pick out the issues that provoke, interest, stimulate and entertain the many thousands who go to work every day. So this month, we are starting with fish.

Ok, for the purists amongst you, it’s actually molluscs. Would you believe me if I told you that Jersey now produces more oysters than the whole of the UK – or would you think I had been at the muscadet, rather then the fruit de mer?

If you follow the tide down through this magazine to page 54, you’ll find a local man called Tony Legg – in a sector of the economy which tends only to get to mentioned in a list of what we used to do, you’ll find him innovating, exporting and diversifying, all very successfully, and on a major scale. For Jersey, it is very much a case of ‘back to the future’.

But if shellfish aren’t quite to your tastes, perhaps we can offer you the meaty main course of the 2015 Budget (page 42); although I accept there are a few numbers in there which might put you off your food altogether, there is plenty to get your teeth into. Like the fact the island is now banking on economic growth, and heading down a road with ‘deficit’ as our rather awkward travelling companion.

Don’t worry though. If the forecasts for next year give you indigestion, then I think the Connect August Dessert Special will take your mind of it; for those of you who got Iran in the World Cup sweepstake (thanks) we can offer you a little game of political roulette. What better way to amuse yourself on your August sun lounger, than trying to guess who is going to be sitting in which seat around the Council of Ministers’ table after the elections? See page 20 for our take on whose bottom will land in which chair – and who will be left standing.

And that’s not all – in place of coffee and petit fours, we have a new feature to round-off your Connect feast this month. Viewpoint (page 50) will deal with a key question facing one of our industry sectors, and give the views of leading industry professionals. This month, we look at the future of the Trust sector.

I hope you enjoy your meal.