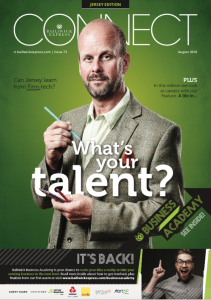 Ok, here’s a challenge for you, to help while away those idle moments on a sun lounger this month, a copy of Connect (already read, of course) acting as a super-size drinks coaster on the table beside you. What has everyone missed in the Great Population Debate? I appreciate that strict grammarians will have just choked on their ice-cubes at the capitalisation of those words, but look, this is the debate which has consumed more media space even than Fort Regent, the new hospital or States reform. And still no one has the answer - and with the withdrawal of the previous Council of Ministers’ attempt at solving it, there’s not even a plan on the table.

To be fair, the previous Council’s record on this topic would have made even Baldrick hang his head in shame; there are not many better definitions of insanity than setting an annual target (sorry, planning assumption) and then happily smashing it out of the park, year-after-year, while pretending everything is under control. Don’t worry, no one will notice - there’s nothing to see here!

A policy was squeezed out amongst the dying embers of the Council’s term of office, and then (unsurprisingly) ran out of time to be debated before the May elections - leaving the scaly old hand of the island’s population problem to land firmly on the shoulder on the new Chief Minister, before he had even popped the cork on his first celebratory bottle of Champagne.

Obviously, it is an exceptionally tough and complex issue. In one corner you have the obvious problem that more people consume more resources, creating demand for school places, space on the road, homes, services, medical care, water, food - amongst many other issues all which feature strongly in any measure of ‘quality of life’, and put increasing pressure on the environment. This all feeds into our perception of what ‘Jersey’ is all about.

Yes, technology is the answer to some of those problems, and one of this month’s main features - see page 18 - sets out how a leading digital economy, Finland, is already implementing the solutions.

But the population issue is broader than that, which is where we need to introduce the other side - that you only need to look at the issues being experienced in Alderney to see the dangers of a falling population in terms of the variety of rewarding careers on offer for young people, the struggle for businesses to power the economy and provide jobs without being able to recruit, the reduction in choice for services like air links, shops or specialist medical services without the demand to support them; and critically, the inability of shrinking tax receipts to support those who really need help, such as an increasingly elderly population. Going backwards is much harder than going forwards, hence the reason we are locked on the current ‘growth’ path, despite manifest concerns.

The simple fact is that after years of debating this issue, no one has yet come up with an answer. So in the absence of a Hitchhiker’s Guide to the Galaxy-style super computer (and lingering doubt that “42” is really a useful answer anyway, unless it is a prediction of how many years will pass before we find a solution), then you might as well make yourselves useful while away on holiday, and in need of a break from the family.

All the data you need is on page 4. If you come up with the right solution (actually, ‘any’ solution) e-mail it to editor@bailiwickexpress. com and we’ll publish the best ones in the next edition. One quick tip before you start - think big, think long-term and don’t tellGuernsey. Oh, and a stiff drink is probably the best place to start...and finish.