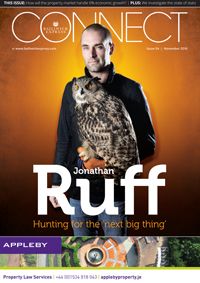 I know what you’re thinking. What does a man holding a bird of prey have to do with business in Jersey? Well, notwithstanding the point that here at Connect, we take a very broad view of ‘business,’ the man in question is Jonathan Ruff, who is currently trying to expand the Island’s leisure offering, through a games arcade on the waterfront, a new bar in town and an ambitious development of Tamba Park in the heart of the parishes. In an Island which is desperately in need of true entrepreneurial spark, he is starting up, going forward and making waves. The full interview is on page 5.

From a new business to one which is very well established, and has just won a further renewal of its lease for another ten years, amid much political heat and posturing. Rubis owns the company which leases the fuel farm land from the States, an issue which has sparked States questions, regulatory reviews and Scrutiny investigations. And while all that goes on, their business just flows along as it did before, storing and supplying fuel. On page 20 they cut through much of the noise, innuendo and allegation and set out how they go about doing it.

While we’re on the subject of noise, innuendo and allegation, the antidote to that triumvirate of the intellectually bankrupt is real data. Which is why we’ve chosen this month to focus on the States Statistics Unit, the team which provides the actual numbers on which so much policy, and subsequent comment, is based. Their job is not to make judgements on what they find, it is to make sure that their data is as accurate and as relevant as it can be. You can read the narrative behind the numbers on page 29.

In his column on page 26, the Fool quotes a definition of a coincidence as the word we use when we can’t see how something is really working. So, in a way, that’s what the Stats Unit does...it gives us the data so that we can, hopefully, see what is really going on. And that’s a not a bad mission for a business magazine too.