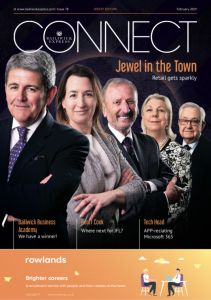 Well, that was January. So much for a quiet start to the year. For those who think ‘news’ in Jersey is of the small furry animal stuck in a tree variety (and I still hear people, including some in the media, alleging this), then they simply need to click through the days of last month to re-focus on the true picture.

From the ‘two-steps-forward-one-step-back’ dance routine going on at the hospital, to the “oh, yes there is”, “oh no there isn’t” Punch and Judy show over whether there is any more money to fund cost-of-living pay rises for States employees; by way of the growing political chicanery taking place within the Council of Ministers as the first cracks in the ‘one team’ facade begin to emerge in tandem with the first bumps in the road; and that’s not to mention the communal ‘gulp’ being taken at the true cost – in both monetary, and ‘upheaval’ terms – of finally reforming the public sector. So that’s what we meant by change!

But surely ‘business’ can carry on regardless, metaphorically putting its feet up on the table, breaking out the popcorn and archly shaking its head at the idiocy all around? Well, no actually.

Confidence. There’s nothing quite like it for building an economy. Facts and figures have their place, but at heart (rather than in our heads) we make emotional decisions, which we then rationalise in order to justify them.

And not confidence based on a distortion of the facts; I used to deal frequently with a politician who used the need to maintain business confidence as a justification for hiding from all problems – to say otherwise was not to be ‘on side’, and potentially (whisper it quietly) a ‘wrecker.’ The shame.

True confidence emanates from the knowledge that original problems have been surfaced, analysed and tackled, with a mechanism in place for ongoing feedback and continual re-adjustment.

If that sounds like Jersey today, then feel free to put your feet up and enjoy Connect. If not, then the bit about enjoying Connect still stands (obviously); but remember there is still work to do, and we all have a part to play.