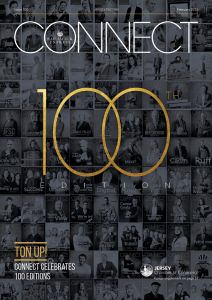 Welcome to the 100th edition of Connect! For those who put so much work into making this magazine the best it can be, it is a moment to reflect. As the Editor throughout that period, I would like to take this opportunity to convey my heartfelt thanks to all of our contributors, advertisers and readers – and the editorial, production and sales teams - who together put together a magazine which we genuinely hope you look forward to reading.

It began in late 2010 as an idea – did the island need a new business magazine? We strongly believed that it did, and that commitment to bring something different to the market has carried us through ever since.

The intervening period has seen the main media landscape in Jersey change considerably, not least with the launch of our sister publication, Bailiwick Express, in January 2014.

It has also seen the rapid growth of social channels, and the emergence of the Government itself as one of the local media, posting regular articles, videos and live briefings on its owned channels, such as Twitter and YouTube, in an attempt to disintermediate a layer of journalism.

Within that, there is now little point in the other news media simply giving even greater amplification to what the Government wants to say; and with many islanders already sharing their thoughts and stories on their own social channels, there is a considerable volume of public content demanding the attention of time-poor readers.

And that is a key reason why in Connect, we look for creative ways to shape the content we think you will enjoy reading; whether that is Fenella becoming our in-house ‘agony aunt’ (page 12) or our new 18th century ‘scandal sheet,’ ‘Rumour has it…’ (page 29), we will try out new ideas to stimulate, inform and entertain.

We have tried to do that throughout the last decade, a time which is reviewed both by successive Chamber Presidents on page 16 – and also by one of the prime political movers of that decade, the former Senator Philip Ozouf on page 20.

Love him or hate him, he had the courage to act, and in this edition, he sheds some interesting light on the island’s recent economic history.

In a funny way, there is a link there to how we intend to approach our next 100 editions. We will continue trying to provide something new; the island is as rich with people’s stories now, as it was in 2011, and as it will be in 2031. We consider it to be a real privilege to get to tell those stories, and to have the creative freedom to look for new ways to do it.

On a personal note, editing this magazine is a job I love, and I hope that shows through in the work we produce.

Enjoy Connect, and thank you for helping us to celebrate this anniversary.