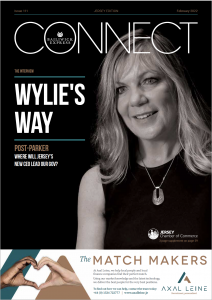 This month Jersey welcomes a lady who will potentially shape island life for many years to come. Don’t believe me? Look at the effect that her predecessor-but-one, Charlie Parker, had.

Anyone who has had even a tangential connection with Jersey public life in the last twenty years will have heard complaints that the States was “full of silos”, that “nothing got done,” and that inefficiency, duplication, and waste was everywhere. As ever, some of that was true; some was an exaggeration; and some was just plain mischievous.

Charlie Parker changed all of that. Quite literally. With the promise of ‘jam tomorrow’ (we’re still waiting for that one, Charlie) he took apart the public sector, and put the pieces back together in a very different order, the true ramifications of which are still emerging. For anyone who argues that ‘nothing changes’, just take one look at the Government of Jersey in the last five years.

And then he was gone, sailing off up the New River. Enter the interim, Paul Martin. He steadied the ship, kept a very low profile, and tried to calm the troubled waters caused by Charlie’s ‘my way or the highway’ reforms.

Last month, and in keeping with the tone of his tenue, he very quietly left on schedule. Which brings us to Suzanne Wylie.

We can only hope that she has been comprehensively, and accurately, briefed, as the challenges come thick and fast. Essentially, she will need to decide whether to continue the direction of travel of Charlie’s ‘change train’ (it was a common analogy of his), whether to park it indefinitely in a siding for urgent modifications, or whether to simply implement a minor course correction to the tracks.

The next island plan, the planning application for the new hospital and the elections will all need to be successfully navigated; as will perhaps her most important task: soothing the upset amongst Government workers caused by so much change, so quickly, restoring morale, and re-inspiring the many thousands of staff who provide the island’s essential services.

In this edition of Connect we speak to Ms Wylie, and ask her how she plans to go about those exceptionally important tasks.

She will quickly realise that in Jersey’s economic micro-climate (which I have compared in these pages before to a fragile web of inter-connections) the Government is the most important single factor, whether it is the provider, the customer, the regulator, the facilitator, the funder, the time-sucker or the inhibitor. Not much happens here in which the Government doesn’t play at least one of those roles, in a way which simply doesn’t happen to the same extent elsewhere.

On page 34, you can read the first interview with Suzanne Wylie, which sheds some light on what sort of leader she will be.
Enjoy Connect.