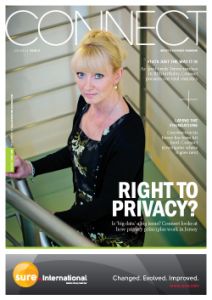 We’ve been having a debate in the newsroom at Connect. Actually, we have plenty of debates, but this one has been running rather longer than most. It relates to one of the main features in this edition, a statistical analysis of where the last five years of false dawns, tired rhetoric, tough decisions and exceptional resilience have taken Jersey’s economy. Now whenever that word ‘statistics’ is used, there’s usually a cliche in the next breath (damned lies, anyone?); and there you have the essence of our debate. Clearly, there’s a lot of value in presenting the actual numbers which underpin our prosperity - equally, the real value is in how those numbers are analysed. So, present them ‘bare’ or ‘interpret’ and be damned? As you’ll see on page 16, we took the view that the famous aphorism, commonly misattributed to Disraeli, was simply wrong: it’s not the the numbers themselves which are the problem; that comes in the way they are used.  So whatever conclusions you draw, the statistics on page 16 will give you the evidence.

And on that note of basing conclusions on evidence, I need to highlight just one piece of feedback we’ve had on our ‘Who’s the fool?’ columnist; Deputy Tadier quoted a description of it as being like ‘nazi propaganda’ because... well, because he mistakenly believed he was being lampooned. If we set to one side the sheer historical inaccuracy, and simple offensiveness, of that remark, all we are left with is his erroneous conclusion. As the column makes clear, the ‘fool’ is the columnist not the subject (see page 45). So in this case, we had an insult, based on a misunderstanding, and wrapped in inaccuracy.

Being careful what you say, or divulge, in public is a strand which is continued in this edition on page 63 with Emma Martins, Jersey’s Data Protection Commissioner. Our personal details, like and dislikes, history and hopes for the future are all valuable currency; but the issue comes in how much control we retain over how ‘our’ details are used, once they have been freely given. Data is now a commodity, and as Mrs Martins explores, we must trade our stock wisely.