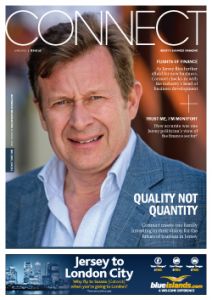 The two biggest beasts in Jersey’s recent economic history roam the pages of Connect this month. There have not been many pound notes rustling through the Island’s tills since the Second World War which haven’t been derived from either the finance or the tourism industries. But grouping the diverse set of markets, products and services which each represents into one collective term – ‘finance’, for example – is deceptive. You can put a label on it, and call it an industry; but only in the same way that ‘the environment’ includes grasses, trees, flowers, air quality and the beach.

Actually, our economy is a complex web of inter-related services, relationships, products and structures, which collectively work together to generate the Island’s prosperity. It might be convenient to put an industry in a cage and stab it (let’s take Deputy Montfort Tadier and the ‘trust industry’, for example), but to do so rather ignores the fact that it is actually a living part of the whole; and to borrow Gerald Durrell’s famous analogy, if you tear a hole in one part of the web, you disturb every single strand.

But that’s not to say we should be so scared of disturbing the equilibrium that very little is ever changed, and the Island gradually, (achingly slowly at first, but quickening all the time), slips further and further off the pace. Or so complacent in the Island’s ability to prosper, that creating change is just too much effort.

The feedback we get at Connect is that many businesses, particularly traditional retailers in St Helier, are now holding on by the ends of their fingertips, as the firm trading grounds fall further away beneath their feet.

Prosperity is possible, but only if all the players on the stage realise that the scene has changed; and that realisation cuts across public and private sectors alike, making previous divisions essentially redundant. ‘What can you do to make the Island more prosperous?’, is the only question worth asking.

We need to act now to create the economy we want to have. And that’s ‘create’; not ‘legislate’ or ‘regulate’. Simply hoping that one day we will all wake up, (realise that the last five years have just been a worsening dream) and actually the recession is over (Hurray! Cue celebrations...) and we’re back to 2008 – seems further into the realms of fantasy than the Wizard of Oz.

This edition of Connect looks at a way forward within both the financial and tourism sectors; but as ever, having the idea is only the first step. It is nothing without a willingness to act.