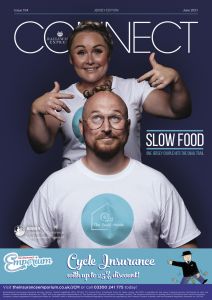 When the most recent stats came out on Jersey’s economy, the effect of covid obviously caught most of the attention; but deep down in the detail, there was something else which caught our eye in the Connect newsroom.

There was a graph which showed the rapid increase in single-person businesses over the last twenty years: they have multiplied by a factor of 4, and have now actually overtaken the number of businesses including two or more people, which has basically remained static for the same period.

In many ways, the steeply increasing line on that graph frames many of the business trends over the period, trends which are still driving our economy to this day.

What stories does it tell? It suggests that many people have found their main income to be insufficient to maintain the lifestyle they want to lead, so they have looked for a side-hustle. That also includes families, who are looking for extra ways to bring some more money in.

It reflects the growth of social media, as a simple, cheap and accessible way to build a customer base in a small community.

It suggests that a growing number find the many regulations (i.e. cost, risk and complexity) around employing other people, which have blossomed in the same period, make keeping it simple in a ‘one-man-band’ much more attractive.

It tells us that the same period saw at least two major economic shocks in the form of the global credit crunch, and covid, which either pushed lots of people out of work, or inspired them to make a life change.

There will be others stories.

But it’s the very last of these strands which we draw out on page 26. Flick to that page now, and you’ll find the story of the Le Sueur family, who have become snail farmers – yes, you read that correctly.

I know many people talk about wanting a slower pace of life, but the Le Sueurs have really taken it to heart, and hope shortly to be both supplying local restaurants, and building an export market for their snails.

Well, why not? We happily eat oysters, mussels and whelks, none of which look any more appetising that a humble snail – particularly when it has been expertly nurtured and ‘grown’ in carefully prepared conditions.

Apparently, there is lots of nutrition under that shell too. Convinced? Hmm, read the story first, before you decide.

Enjoy Connect…it feeds the body, as well as the mind.