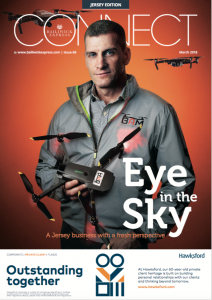 It has all the hallmarks of a real Jersey drama: political intrigue; big players on the local scene crying foul; calls for an urgent ‘review’; life carrying on regardless while everyone claims to have the inside track on “what really happened”; lots of public allegations based on a particular choice of facts - heat, yes lots of heat...and little light. You’re forgiven at this point if you think the acronym RNLI is about to edge, slightly hesitantly, onto the Connect stage. Not this month. Instead, as the curtain goes up, it is two rather different acronyms juking it out in the glare of the main spotlight - ATF Fuels, and CICRA.

Allegations abound, suggestions of undue political influence run like seams throughout. Who are the main players in the darkness at the back of the stage?...no one can really make them out. The Court rules, and suddenly it is CICRA on the door, with ATF calling for a political coup de grâce. And there the action pauses, frozen while we wait for...what? No one is really sure. The audience doesn’t know whether to jeer or cheer - it’s like that awkward moment at a school play when you’re not sure if it's the right moment to clap...or not - best to wait for the pushy mum from down-the-road.

As the curtain swishes down, the audience is left feeling vaguely hollow, not quite sure what they’ve seen..or if they’ve just been used in some way.

Connect sets out the story, so far, on page 4 - it’s one which could yet have far-reaching implications for the way that business is regulated in Jersey, which does suggest that we are only now at the end of an Act, with the script still being written for the next scenes. Whatever is still to come, someone will allege that the forthcoming general election is playing a role. Ever since we turned the corner at the beginning of the year, people are perceiving the May vote to be an invisible magnet, controlling, guiding and in uencing from the other side of the curtain. The law of averages would suggest that in some cases they will be right, and The Fool believes he has hit on one on page 24.

This month his target is the States recent decision to pay a living wage to all public sector employees (which they did anyway), to make sure the States-owned companies paid it too (err...they already did) and then to broaden the requirement out to private sector companies who contract with the government, which actually means that the wages paid by these companies are being set by a religious pressure group who have deemed £9.75 per hour to be the right number irrespective of the particular circumstances. The Fool wonders where that leaves the government’s duty to spend taxpayers’ money in the most efficient way possible.

And that idea of election magnetism also creeps into the Unplugged feature on page 16. With the swathe of new rules which businesses are having to process in 2018 - the most in one year since the introduction of the Employment Law in 2003 - you do wonder how much time owner/managers will have to actually bring in the money.

So, dramas, elections and fresh bureaucracy notwithstanding (ahem), make time to read Connect this year - I think you’re going to need it.