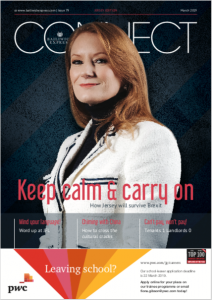 It’s only a word. Six letters. In fact, it’s not even much of a word: a bit harsh, you might say, a couple of syllables which really ought to know better. Good on a triple word score in Scrabble, but not much else. What might have started life as a snappy way for Westminster/media types to ‘talk the talk’ about Britain’s exit from the European Union, it has become a lighting rod for what many perceive is broken in modern democracy. What was basically a hung vote has thrust the entire country (and its dependencies) into uncertainty and doubt, and all so that a former Tory Prime Minister could try and suture together the wounds in his own party, using the political expedient of a referendum. If the question facing you is complex, divisive, corrosive and multi-faceted, what better way to resolve it than by asking an over-simplified, two-dimensional ‘yes/no’ question of more than 50 million different people - just at a time in history when various media platforms are being abused to shape mass opinion? What could go wrong? It’s enough to turn even Nigel Farage to sobriety.

But this month, the word you will hear more than any other is Brexit. You’ll hear it until you beg for mercy. You’ll hear it until your ears bleed, and your brain aches from the sheer idiocy of the whole affair. Before the end of the month you will have realised the truth: that the whole mad exercise has been constructed by the CIA (and theFBI, with help from the mafia and the Cubans...orwas that shooting JFK?) as an exercise in proving to a doubting and sceptical world that actually, electing Donald Trump wasn’t the most stupid democratic decision taken in recent history. Yes, there is something even worse! You see, putting DT in the White House wasn’t really so bad! Voting is a funny thing, you really don’t want to trust the electorate with anything too serious, you know. Now, how about another four years for the big man with the floppy, ginger comb-over? The one who doesn’t believe that proper (ok, any) gun control would save lives. Go on, it’ll be a blast.

Just when you feel yourself sinking into a starry, blue maelstrom, and starting to believe that the human beings over the water are just foreigners rather than friends, here’s an idea to put under your fingernails, and clamber out of the crevasse.Neither ’trump’ or ‘brexit’ are anagrams of any other word! Whisper it quietly, what more evidence of a global conspiracy do you need?Trebix, bixert, xbrite...they might be cleaning products, but they are not a continent-wide exercise in electoral madness. And as for Rumpt? No, best not.

If you can do better e-mail editor@bailiwickexpress.com and we’ll print the best ones. If not, just enjoy Connect. It’s better than Brexit.