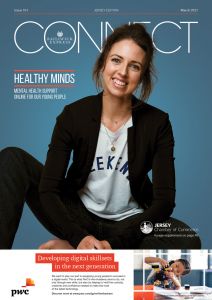 Seeing pictures of the way people acted before last March seems like another life. A time when it was acceptable to hug an elderly relative, to go for a beer in a crowded bar or to actually leave the island. Ok, that last example is a stretch, of course you can still leave the island now…if you want to lock yourself up at home for 10 days when you get back.

This month marks a series of thoroughly unwanted anniversaries, such as the first diagnosed case of covid in Jersey. How much has changed in the period since then.

On page 4 we take a look at the pandemic in terms of the effect on the local economy – you know, the thing that pays all of our salaries.

If those numbers are too brutal, then you might want to skip to the case study which accompanies it – we tell the story of one local business, Valley Foods, who have had to fundamentally adapt their business, and pick up on the shift to home food shopping online.

They were lucky in the sense that the government restrictions didn’t force them to stop trading altogether.

Businesses who have had to shut their doors have looked to the government for support – after all, they have closed only because they have been ordered to.

Some have found that backing, particularly in the co-funded payroll scheme, which has provided vital support for many local jobs. The scheme looks to have been a real success.

Others have not been so fortunate, describing alternative support schemes, such as the ones for hospitality, for attractions, and for the events sector – who have been shut down for almost a year – as being, well, a waste of time.

Privately, the owners of those businesses speak of an ‘economic Darwinism’ in the minds of some civil servants, who they think take the view that if one business goes under, then no matter, another will soon take its place! That’s the beauty of the free market!

Well, no, actually. Any start-up relies on someone, usually the owner, being prepared to stake their capital, either in the form of actual cash, or guarantees. In the future, those providers of capital will absolutely remember the actions of the government through this crisis (it won’t be the last time we hear the word “pandemic”) and make their investment decisions accordingly.

Put bluntly, the failure of these support schemes has just pushed up their risk – which will make their capital harder to access, and much more expensive.

Mass extinction events (such as many businesses going bust, because the government has closed them down) tend to bring the progressive chain of continual Darwinian development to an abrupt end.

Which really makes the attitude noted above not so much economic Darwinism, as economic suicide. The market doesn’t look so free when no one wants to take part in it.

Actually, it looks like a market in which it is only the big international brands who have the ability to operate – and that’s not good news if your dream is to build a life for yourself and your family by opening a new small business; and that’s something which has been an integral part of life in Jersey for a very long time.

We must make sure it isn’t something else which seems to belong only to life pre-covid.