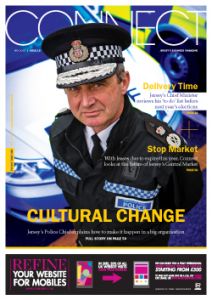 There’s an article in this edition on Mike Bowron, Jersey’s Chief of Police, which I really think you should read. Of course, as the Editor, I’m biased, and I think you should read every article – but perhaps give this one some extra time. Why? Simple. No, that’s the answer...it’s simple. He is dealing with a big subject – achieving real cultural change in a major organisation – but rather than reach for the textbook, create a lengthy set of procedures, implement complex performance management protocols, and genuinely confuse the issue with intellectually-justified obfuscation...he keeps it simple. Change is about setting a clear common goal, and then giving people the confidence to get there. How do you reduce customer complaints? Simple. Make yourself directly accessible, every day, for customers to talk to.

That word ‘confidence’ can be troublesome though. Too often it is twisted into a tool to confuse: ‘don’t criticise our management of the economy, as to do so will sap confidence’. Really? Surely an honest appraisal of where we are is essential for us to go forward? And without that appraisal, there is a danger that destructive thinking prevails, and inhibits the change we need. There is a real difference between honesty and negativity – it lies in the intention. One of the points you will find in Mike Bowron’s article is an honest assessment of what needed to change. Simple.

If that analysis is applied to Jersey’s core problem of how to restart its economy (rather than reshape its States Assembly) a way forward emerges.

Example: one minister was recently quoted in the media as suggesting that the way to get more people into work is for businesses to employ them, even if that reduces their profitability. Simple, and logically flawless. Apart from the rather important point that if the worst happens and that business folds (dragged under perhaps, by an excessive cost-base) then there are more people out of work than before.

There are currently two ‘rip-off’ retail reports working their way through the system, whose underlying premise is that businesses are charging their customers too much and falsely claiming it is simply the ‘cost of doing business’ in Jersey.

That example suggests to me that our thinking is still in the wrong place. Actually, the answer lies in helping businesses become more prosperous, as that prosperity supports wages, jobs and taxes. For some, it’s a bit like steering a car into a skid: counter intuitive, but still the right thing to do. It’s not about profits, it’s about society as a whole; take a look at 1979 Britain if you need a reminder of the sort of deep social division which follows (for decades) a truly defunct economy.

And with that as the common goal (public and private sectors) the day-to-day decisions to deliver it become much simpler.