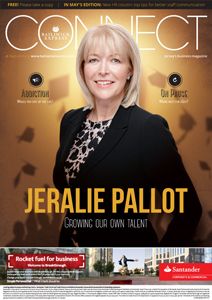 Being in the words business, it’s often the way people describe something which you pick up on first. A prime example is the recent recession. Initially, we weren’t allowed to call it a ‘recession’; apparently, the official word to use was ‘downturn’ which had the neat effect of making it all seem less serious, part of a normal economic cycle, and certainly never anything to do with the decisions of those now ruling on what it should be called – oh, and by the way, downturns don’t last very long, didn’t we mention that?

Fast-forward six long years and zoom in on Jersey, and the words-which-shall-not-be-named are now ‘deficit’ and ‘tax’. According to two very senior ministers, we don’t have a ‘deficit’ we have a ‘shortfall’ - you know, the kind of little thing that you had as a child when you desperately wanted to buy a new lego set, but you had a ‘shortfall’ in the amount of pocket money left, so the Bank of Mum&Dad made up the difference. And an extra amount of money paid by every employee in the island by law, based on the scale of their wages, is not a ‘tax’ - how could it be? Silly me. It’s a ‘charge’ of course, to make sure we fairly pay our way. Now, run along and play with your lego Cyril Le Marquand House!

The reason I mention those two linguistic vignettes is that they are nothing more than a total distraction. Rather than taking to social media to insist (definition: what people do on Twitter when they use CAPS) that, “…it’s NOT a deficit..”(and even it is, it’s no problem people, we knew it was coming, and we have a plan!), as one Minister did this week, you might imagine that there was far too much to do implementing the solution – which is why this month we focus on the “paused” eGov project: the sort of deficit-busting transformational change we need, which will see the vast majority of the ways you interact with the government done online, and therefore we hope, more efficiently.

The vital word in the above paragraph is ‘paused’ - with a looming deficit, sorry shortfall, you might think that a pause at this time was akin to tying your shoelaces in the middle of the road – so on page 22, we take an in depth look at what’s happened, and where we go next.

But this month’s Connect isn’t just for those of you who love words – for the more numerically minded, I offer you the Fool’s equation for Island’s current financial travails:

So if you are experiencing a shortfall in your deficit, or your charges are becoming taxing, read the Fool…in times of trouble, wisdom can often be found in the strangest of places.