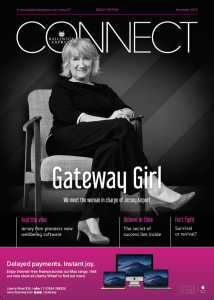 The old saying goes that you should always spend as much money as you can afford, on either shoes or a bed; the logic being that if you are not in one, then you’re in the other.

In many ways (stick with it), the same logic could be applied to both Fort Regent and Jersey Airport. There can’t be two other local venues which could guarantee at least one visit from every islander, every year, decade after decade. The airport, maybe, but the Fort? Shurely shome mishtake! That old ‘white elephant’ on the hill? But, hold. Even in its current ‘preloved’ state, the Fort still hosts a huge varieties of small clubs, activities and experiences, penetrating down into the detail of the daily lives of islanders in a way (and on a scale) which nowhere else has ever done.

Of course the analogy breaks down when it comes to spending money. The Airport is about to embark on a multi-million pound development program to make sure it complies with the many international regulations which govern 21st century aviation - you can read more about the lady who will make sure that the airport achieves all that on page 34.

But the Fort? Rather than spending money to go forward, the Fort is trapped in a spending spiral just to stay open. In an old building which was built to keep people out, money is devoured to keep them coming in; the Fort is a running sore on the political career of anyone who has mumbled incoherently about how they plan to look after the island’s assets.

With more reports written about what to do with it than could fill the Gloucester Hall, the only growth there, is in the scale of the decay. We take a look at what might emerge next on page 5.

All of which brings me to Think Tank on page 52 (it doesn’t; well, perhaps only in the sense of ’taking a look’). There, the Jersey Policy Forum investigates ‘deep fakes’ which sit, rather uncomfortably, on the tipping point where the policing powers of CCTV can transition into reality distortion and truth-bending.

After all, how else can the Fort realistically recover from the years of neglectful platitudes, if not by faking it to make it? With a few clicks of the mouse, we can be plunged back into the days of ghost trains, dodgems, cable cars, Showaddywaddy and the strange submarine which apparently took you out under Elizabeth Castle. Or was that last one an early example of a ‘deep fake’?