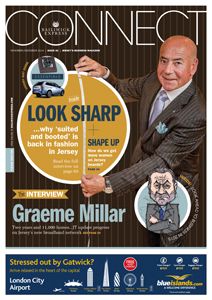 It is not bad as stories go: come to Jersey for a holiday, play football on the beach with top professionals, stay, set up a successful small business and trade for close to 35 years. It was what came next that ruined it for Vince Vasiliou -  “Hurricane Recession”, which was actually a perfect storm of fewer tourists and lower disposable income, which he had to navigate with a jagged hole below the waterline in the form of high rents.

His story is on page 60; we decided to tell it in this edition as it pulls together so many of the strands that have formed the texture of our economy in recent decades; and it also casts a different perspective on the travails of the retail sector, as it wasn’t the internet which “did” for Vince The Tailor – at the time of writing, at least, there isn’t an app for that line of work.

So from tailoring to technology, the installation of fibre broadband continues across Jersey, soon to be partnered by new 4G mobile broadband networks, from the early part of next year – very soon, we will be one of the most ‘connected’ places in the world. Right now, we stand on the cusp of that position, so on page 50, we take a look at where we are up to.

While we are on the subject of the future, this edition covers the final two months of 2014, and without wanting to cast the rest of the year aside in a few taps on the keyboard, it is a period when we look ahead, and make plans – I hope our Business in 2015 supplement, which you’ll find on page 89, will help to map out the territory which we will all soon be treading on.

Will 2015 be the year when the gender balance begins to swing more evenly between the sexes? Well, Connect is nothing if not diverse, so this month we’re also stepping tentatively into local boardrooms to look at the male/female split. OK, so the results (page 24) probably won’t surprise you, but isn’t that exactly why we should take a good look?

Finally, now that the ballot boxes have been tidied away for another three years, we wanted to tip our hats to General Election 2014 – to lay it to rest properly, if you like, before we finally turn and walk away. The images you tend to see on election night tend to be binary, either smiling winner, or tearful loser. As ever, that rigid dichotomy steps neatly over the swirling currents that actually constitute the triumph and disaster of an election. Well, not any more. On page 46, you’ll find a far more sophisticated record, captured by our photographer, Gary Grimshaw. It looks better, even if the result is still the same.