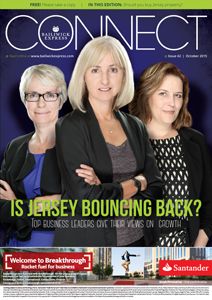 Ok, we should have expected it. In a month when Jersey’s politicians debated gay marriage, there was always going to be something said in public which caused jaws to drop, hearts to sink and spirits to plummet. But Connect’s candidate for asinine uttering of the month doesn’t fall crashingly from that debate at all.

First, the context. We are just a few weeks away from the big ‘Deficit Debate’, which will see States Members agree a plan leading to compulsory cuts in States jobs, new ‘chaxes’ (what you pay when a ‘tax’ is called a ‘charge’) levied on every Islander, and reforms in the way the public sector works. Even if you had just stepped off the delayed (probably) sailing from Poole, arrived on our fair shores and asked, “…so this is Jersey, right…what’s it all about then?”, you would know that, merit notwithstanding, there was always going to be substantial – although politically ineffectual - opposition to those measures.

Put simply, to catch the Ministers’ drift, you need to accept that the States need major change; that the economy can’t now support the glorious edifice which years of banking profits have constructed. And to get to that point, you need to realise we have a problem in the shape of a sucking hole removing £145m every year from the public purse by 2019. The Ministers have, finally, accepted that, and have staked their political reputations on being able to ‘heal the hole’ with the program outlined above.

There’s a very thin, taut strand which connects all of this – that to make major change, you have to accept there is a major problem. If you don’t, resolve to reform slips quietly (you hope) into the sand, and actual real action is crushed under a brash onslaught of empty political posturing. The net effect is we all carry on largely as before, with the Island’s fingers crossed firmly behind its back.

That strand snapped with loud ‘ping’ during the presentation of the recent Innovation Review, which effectively told us that the Island had lost it’s innovation mojo.

It snapped with a reference from the former Treasury Minister, Senator Ozouf, to the “so-called deficit.” Right, so now it’s no longer an “actual” deficit, it’s just a word beginning with ‘d’ which some poor, misguided people (not sure why?) have begun to use. Actually, we should be talking about just how great our public finances truly are, thanks perhaps to the wisdom of former Treasury Ministers! In which case, why are States workers losing their jobs? Why are we going to have to all pay more money in ‘chaxes’? People might understand, if the deficit is real; but if it’s only “so called”, then the whole ministerial action plan is at best pointless, and at worst, a con.

It is exactly that sort of bare-faced reality refusal which has clipped the wings of change in Jersey and slaked our thirst for innovation - Chamber and the IOD jointly caution against it in our Unplugged feature on page 36.