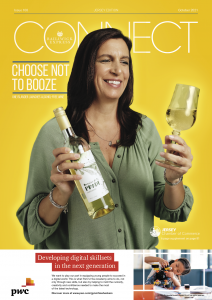 It’s a problem Jersey has wrestled with for decades: productivity. That doesn’t need to mean everyone works a bit harder – in fact, as Gailina Liew from the Jersey Policy Forum argues on page 48 of this edition, the answer may actually lie in working fewer hours, but getting more value out of the ones which are left.

It’s a tempting thought. But one of the lessons from the pandemic so far, has been that we need to reconsider conventional models of working in which a set number of people sit down at their desks at 09:00, all in the same office and tap away on a keyboard until 17:00, and then promptly get up and drive home, Monday to Friday.

Many workplaces are still following that mentality, even though it already seems so outdated – a format for ‘work’ set in an industrial era which seems totally out of touch with the way people live their lives, and the technologies which are now commonly used to support more flexibility.

Journalism has never really been like that; in some ways, it is very tightly focussed on ‘productivity’ in a slightly different sense: success isn’t defined by how long you sit at your desk - but on getting a magazine out, delivering a news bulletin on time or making sure a website has sufficient sparkling content. It is a business which is totally focussed on results.

‘twas ever thus – if you got the best stories, and produced the best copy, after a three hour liquid lunch with your contacts then crack on…it’s all about the results. Pragmatism over dogmatism.

Change to the way we work has been coming for a long time, but the last eighteen months has upped the pace considerably. On page 30 we meet a lady who has recognised the new trend for zero-alcohol drinks, and has launched an import business selling wine without the booze to a local audience. It’s a bold move given how well-known Jersey is for liking a ‘tipple’ – but times are changing.

And then on page 22, Tim Brown from Jersey Post sets out the true scale of the shift in his business from being one based on letters (with some parcels on top) to being one based on parcels (and also delivering a few letters). He has also had to manage the shift in revenues from a business which was largely funded through its local sales, to one which now needs its global operations to support its work in Jersey.

That change has been steadily moving through for some years, but it has accelerated through the past year.

The fact that change is happening is no longer the challenge – keeping up with the pace of it is where the game is now at, and that’s where we look to technology for support.

It’s going to be quite a ride…and Connect will be with you all way.