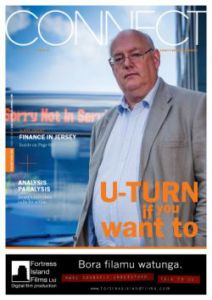 There’s a great quote in one of this month’s main features. Have a look at our interview on the Island’s education system (page 40) and you’ll find the line: ‘In the absence of a great dream, pettiness prevails’. To my mind there is no better way to capture the most pernicious effect of the current recession – that it has focussed the minds of the majority on survival, not on fanning the spark which will ignite the next phase of the Island’s economic history.

Creation involves risk. It involves failure, in fact it thrives on it. In a business sense it is usually undertaken by those who are driven to work in their own way, who reject established orthodoxy, who see excessive regulation as the fat which clogs the veins of prosperity. It is a tough path to choose, and so these people look for considerable financial reward. They are often rule-breakers; and they don’t just want to change their business, they want to change their industry. They are restless, driven and occasionally egotistical. Some people call them entrepreneurs.

And so we step tentatively into the realm of received wisdom, that we have an entrepreneurial culture in Jersey which continually innovates to prosper. I wonder if that statement is truly in step with the underlying rhythm of so many of the features in this magazine? On page 20, you’ll read about the acrimonious dispute between Unite and LibertyBus, with comparisons to the ongoing industrial relations issues for the States of Jersey. On page 46, the Chair of the IoD describes the analysis paralysis which he sees as inhibiting action within the public sector. On page 40, one of our most senior ex-head teachers describes how major consultation initiatives can actually be used to control, rather than to consult. Are they the beats of an entrepreneurial culture?

But those beats are there if you listen carefully. In the last edition we spoke to Andrew Mitchell, the cardiologist who is using new technologies to literally promote new life; in this one, you’ll find Jane James who is using what she finds on the beach to craft products to sell in the two shops she has opened. They are different stories with two common threads – the rejection of complacency and the need to take action.

Connect will continue to cover those stories and in doing so provoke discussion about the degree to which we in Jersey break new ground, or just tread comfortably in our usual steps.

Those ideas are also prevalent in our Finance Supplement, which you’ll find inside on page 65. The statistics show that industry has clearly suffered through the negative economic conditions of recent years – but they also show that it remains strong. It is not an exaggeration to say that the Island’s short-term prosperity rests on the extent to which the financial services industry catches the ripple of recovery in the UK.