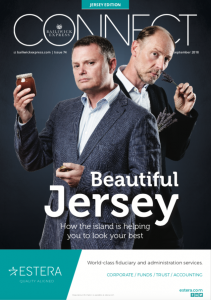 Regular readers of Connect will know that we are big fans of technology. Despite the fibreinfrastructure it now has, Jersey is still behind other European nations in getting key public services online. Millions have been spent (at least £11.6m so far) on the e-Gov project, and we are told (continually) change is just around the corner. In this edition of Connect (page 18)we focus in on the Taxes Office, and a major re-organisation which will see tax and social security payments brought together, and finally, the ability to file a digital tax return. Yes, that might mean no longer filling in the same (basically) information year after year on a paper form and waiting months for the result. When you read that currently, in some areas, the Taxes Office team has to use computers which aren’t even compatible with a mouse, then you realise just how much change is needed - and in places, just how far off the ‘digital pace’ Jersey has fallen, despite what we are often led to believe.

Realistically, it seems we are looking at 2020 before digital tax returns will become a reality, and who knows, it might even coincide with such revolutionary concepts as married women being treated as actual people rather than adjuncts to their husbands. But the direction of travel is clearly right, even if the pace of change can sometimes make continents look rather nippy.

On the subject of change, this month marks the beginning of the final phase of discrimination legislation, with the introduction of discrimination on the grounds of disability into the existing law. It’s been left to the end as it is the one which businesses argued they needed the longest to prepare for - and that time has been granted, along with a lead-in period before the latest changes have actual effect. For some it will mean significant changes, which shouldn’t be underestimated; but help is at hand.

On page 28, we meet Scott Douglas, who has built a business working on innovative adaptions to make everyday tasks accessible to all. His view is that people with a disability are potential staff, and customers, who really shouldn’t be ignored, and with a little creative thinking, we can open up lots of new opportunities.

Effectively, it’s not so much about just installing a lift to get people who use a wheelchair to the top floor of your building, as a change in attitude which takes a fresh look at what a business does, and how it does it, and looks for adaptions to open it up to more people.

Which from a very different angle (as always),is also the subject of the Fool’s column on page 26. However in this case, he is homing in on bathrooms - how many do you actually need, compared to how may the building inspectors might want you to have. It’s the sort of conundrum which only a thorough reading of Connect can resolve.