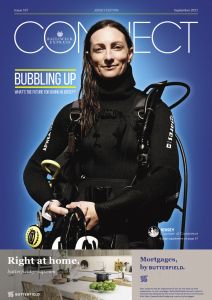 Looking into the future for two of Jersey’s longest established activities is the theme for Connect this month.

If you want a perfect example of a sector which has been buffeted by the winds of change in recent years – or “disrupted” in modern business parlance – then look no further than farming. The island’s farmers have had to cope with more than their fair share of threats, and that trend is in no way abating. But still in some places, an image persists of them being ‘stuck in their ways’ – the reality couldn’t be more different.

On page 4, we look at how they are using technology to innovate and survive, and ensure that the Jersey Royal remains a viable crop; anyone who lives in Jersey, whatever they do for a living, has a vested interest in that happening. Although it should be blatantly obvious, it still sometimes needs to be said that the value of farming to the island goes way deeper than its contribution to our GVA. Knowing the price of everything, and the value of nothing, is an apt aphorism here.

One of the stories of the summer has been the future of the Bouley Bay Dive Centre, somewhere that generations of islanders have learnt scuba diving, and in more recent years, paddle boarding and yoga.

Initially, we heard that the now derelict Water’s Edge Hotel could be re-developed into a single family home; which of course begged the question as to the future of the Dive Centre, which forms part of it.

The resulting outcry led to an agreement between the family involved and the Dive Centre which has provided some reassurance – if not guarantees – about what will
happen next.

On page 28, we speak to the Centre owner Toyah Tomkins about what it means to Bouley Bay, and what certainty she has about the future.

The link between those two strands is clear: in both, you have owner-managed businesses who provide a valuable service to the community, and who have become a critical part of the local landscape in a way which can’t really be measured by financial metrics alone.

Yes, both the farmers, and the Dive Centre, make their living from Jersey and its people; but they also give back in terms of being the custodians of one the many strands making up the island’s identity.

You’ll find lots of stories like that in Connect – I hope you enjoy them.