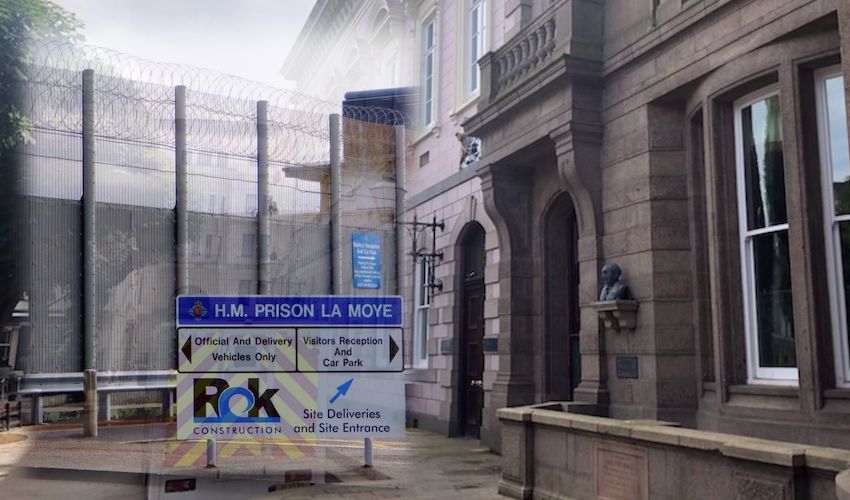 A young drug dealer who has verbally abused prison staff, spat at them and smashed a television while on remand at Le Moye has been sentenced to 15 months in jail after being found unsuitable for community service.

21-year-old Joel Steven William Hampton was sentenced by the Royal Court on Thursday for supplying cannabis and cannabis resin, and also importing the latter Class B drug.

Hampton, who maintains his innocence, was found guilty at the end of a trial last month.

Crown Advocate Sam Brown told the Court that Hampton was dealing cannabis resin on a commercial basis between 1 June 2018 and 11 January 2020, operating one level above a “street” dealer.

During that time, he separately imported a large amount of cannabis resin for onward supply and sale.

Advocate Brown said: “He purchased on credit large amounts of cannabis for wholesale prices from other dealers higher up the supply chain and transferred those quantities to drug dealing associates below or on the same level as him.

“[Hampton] expected to receive from them the profits of any sales and his associates received the drugs from him, also on credit.”

Facing rising debts, Hampton tried to smuggle just over a kilo of cannabis resin through the post, which was hidden in a box marked as a ‘water foot pump”. This was incepted by  a Customs Officer at Postal Headquarters on 10 January 2020 and officers searched Hampton’s home the following day.

There they found a small amount of cannabis, as well as drugs paraphernalia indicating his continuing involvement in drug dealing.

At trial, Hampton denied ever being a drug dealer, he said he knew nothing about incriminating text messages on his phone, and he maintained that the evidence against him had been made up or fabricated.

During the sentencing hearing, Advocate Brown said that Hampton’s ongoing denial meant he had little mitigation from the Crown’s perspective, apart from his youth.

“It is our view that his absence of remorse and hopeless maintenance of innocence in the teeth of a conviction means that, with regret, there are no features that warrant a shift in sentence from deterrence to rehabilitation,” he added.

Defending, Advocate Francesca Pinel said that, despite his belief of innocence, Hampton would abide by a community service order "to get it done". She added that because of his age and the delay in bringing the case to court, this non-custodial sentence was appropriate.

However, the Court also heard from a Probation Officer that the service could not recommend Hampton for community service because of his “non-compliant, disruptive and violent behaviour” at HMP La Moye, particularly when he was first sent there on remand.

This had included being verbally abusive to staff, spitting at them, refusing to engage and, within the last month, smashing a television.

Passing sentence, Commissioner Julian Clyde-Smith, who was sitting with Jurats Jane Ronge and Robert Christensen in a secure court of the Magistrate’s Court, said they agreed with the Crown’s proposed 15-month sentence.

The Commissioner urged Hampton to engage with a psychologist at the prison, who suspected he may have a personality disorder.

This is something Hampton had, so far, refused to do.