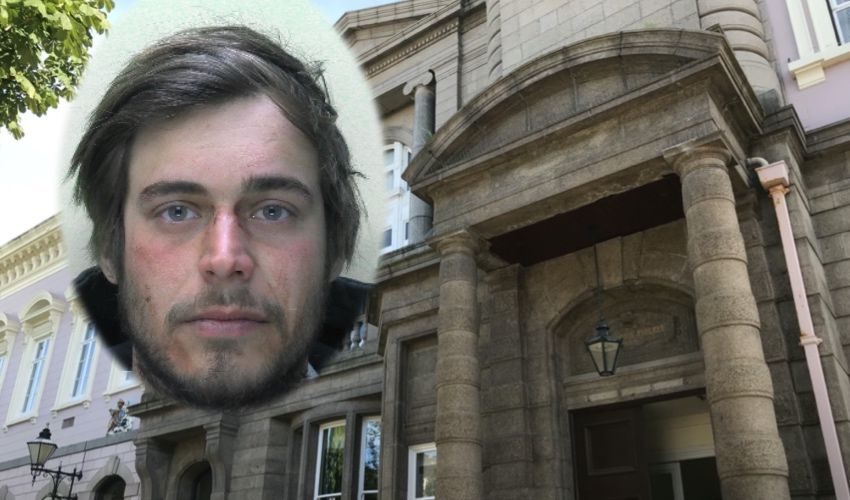 A 23-year-old has been jailed for 15 months for committing a number of alcohol-fuelled violent attacks on people and property.

Sentenced by the Royal Court on Friday, Ruben Wilson Moreira Da Silva was also banned from licensed premises for 24 months and ordered to pay £382 in compensation to a café owner for smashing a glass-paned door with his bare fist.

Laying out the facts of the case, Crown Advocate Sam Brown said that Da Silva’s first violent act - a grave and criminal assault - took place on 1 April 2020, when he head-butted a man in the street after a “trifling driving dispute” that had happened three months earlier.

Then, in the early hours of 5 July last year, De Silva carried out a “savage drunken attack” when he punched a stranger to the ground, then hit him twice in the face and elbowed him a further five times while the victim lay on the ground.

This was after Da Silva, who was with a group of two other men and two women, had walked past another group in Bath Street who were unknown to them. A friend of Da Silva “directed some nasty comments” towards a female in the other party, leading to words being exchanged.

“Fortunately, neither of these two attacks resulted in serious and lasting injury to the victims,” said Advocate Brown.

Thirdly, on 17 April this year, a drunk Da Silva and a friend tried to order more drinks at the Wagon Wheel café in Kensington Street after 23:00 but was told that it was closing time and no more alcohol would be served.

Da Silva started shouting and swearing at the staff and his friend also threatened the café’s owner. One member of staff recorded their behaviour on his phone, which was shown to the Court at sentencing.

At one stage, Da Silva pushed his friend - the same who had initiated the confrontation in Bath Street - outside and closed the door. The friend then punched the glass pane of the door twice.

When Da Silva, who had continued to remonstrate with staff, eventually left, he punched the same glass pane at least seven times, causing it to smash, badly injuring his hand in the process.

Police officers arrived and it took over half an hour for them to usher Da Silva - who was drunk and very uncooperative - from Parade Gardens into the nearby A&E Department in order to have his injured hand assessed.

In committing these crimes, Da Silva also broke a 90 hours’ community service order, given by the Magistrate in March 2020 for causing serious injury by careless driving.

His girlfriend was badly hurt when Da Silva tried to overtake a friend who was part of a three-car convoy.

Driving at about 45mph along a road in St. Lawrence, Da Silva hit the kerb, lost control and collided with a tree.

This caused the two other cars behind him to spin and hit each other.

Defending Da Silva, Advocate Simon Thomas said that this crash had had a profound impact on his client, with the guilt of injuring his girlfriend leading to mental health problems and excessive drinking.

“He saw her seriously injured and he justifiably blames himself,” he said. “The psychological impact on him has been significant: it plays over and over in his head; he thought he had killed her.”

He added that for the most serious of the crimes, the grave and criminal assault in Bath Street, there had been an “element of provocation” from the other group.

Da Silva was also remorseful, polite and well respected at work, said Advocate Thomas, who called for a non-custodial sentence.

Sentencing, the Bailiff, Tim Le Cocq, who was sitting with Jurats Anthony Olsen and Sally Sparrow, told Da Silva: “Fortunately none of the injuries you caused were life changing or serious but they were very unpleasant for the victims.

“You clearly have difficulty governing your temper. Alcohol-fuelled violence in our streets is unacceptable and will not be tolerated in this court.”

The Court, however, did note Da Silva’s early guilty pleas and remorse, adding that it “was with some regret” that it could not find the “exceptional circumstances” that would have allowed it to impose a non-custodial sentence.