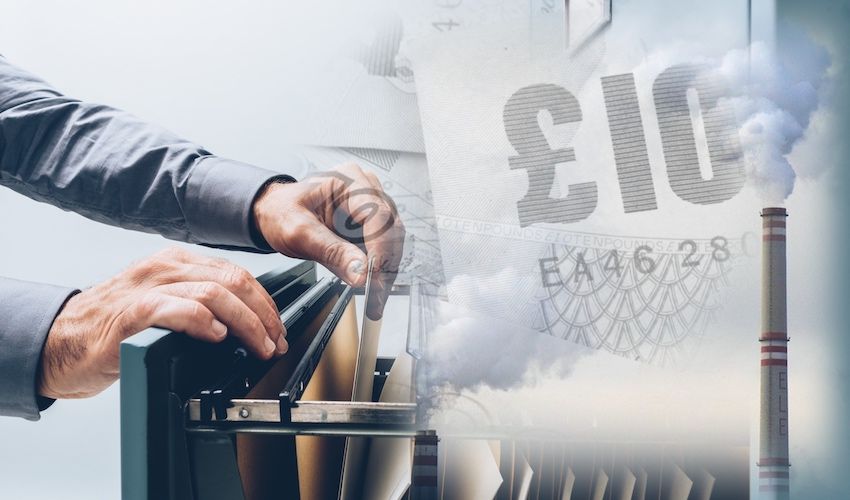 Local climate change protesters are calling for there to be an obligation on companies registered in Jersey to be transparent about investments which they describe as “related to the destruction of the planet."

News of the fresh campaign effort came from Jersey’s Extinction Rebellion Co-ordinator Eckart Weber, who dubbed the government’s focus on locally produced emissions as “simply not enough” to offset Jersey money that has been invested in fossil fuels, and other practices that are damaging the planet.

Speaking to Express directly after a briefing Extinction Rebellion held with States Members yesterday outlining the group's response to the recently published Carbon Neutral Strategy, and urging them to consider Jersey’s “financial clout” as an international finance centre, Mr Weber said that emissions produced in Jersey are only a fraction of the environmental damage that can be attributed to the island.

The campaigner explained that the pressure group is lobbying the government to widen the mandate of the ‘Citizens Assembly’ (CA) – a randomly selected pool of islanders tasked with making recommendations about becoming carbon neutral – in order to account for Jersey’s wider responsibility as a major player in global finance.

Pictured: The Citizens Assembly will function like 'environmental jury duty.'

The group also wants to see the CA’s recommendations become binding, when currently the final say lies with the States Assembly.

Currently, the CA will be focusing mainly on pollutants within Jersey’s 45 square miles, but for Mr Weber, “that is simply not enough”.

When asked why he thinks such a small island as Jersey needs to make global efforts to avoid climate change, he replied: “It’s the standard defence and the first thing to say is in fact if you count up all the carbon emissions of small jurisdictions – similar and slightly bigger than Jersey – the combined carbon emissions of those jurisdictions actually exceeds China.

Pictured: Mr Weber says that Jersey's reputation as an major finance player changes the extent of its climate responsibility.

He pointed out that “the government is keen to promote Jersey as an international finance centre”, but “what it is as yet failing to do is to acknowledge that it is in fact an important international player in relation to fossil fuel investment”.

This, Mr Weber explained, is why Extinction Rebellion is campaigning for there to be an obligation on companies registered in Jersey to be transparent about investments “related to the destruction of the planet.”

Speaking about the response of States Members to his presentation at the private briefing, he said that around “a dozen” politicians and officials attended.

Some, he said, were “positive” about his message and others voiced that they favoured a more gradual approach. Mr Weber also told Express that some States Members raised concerns about making the recommendations of the CA binding because they felt that only elected representatives should have this power.

“Our democracy, we like to think, comes from Greece and that in fact citizens assemblies were part and parcel of that initial Greek democracy. It’s simply that we have gotten away from the sense of trusting and this is the other big thing that I said, trusting the citizens to make the right decisions in this case.

Posted by John Henwood on Jan 21st, 2020
I would be grateful if Eckart Weber stated where he and Jersey's Extinction Rebellion (XR) stand on their co-founder, Roger Hallam's statement, that the climate crisis (so called) should be treated with the same emotional response as Auschwitz, the Nazi concentration camp in which more than a million people were murdered. Does he, and his Jersey XR contingent support this view? If not, why have they not distanced themselves from such a view?
Posted by Peter Richardson on Jan 21st, 2020
Not much point in going all "peace love and vegetable rights man" unless we also tackle the population explosion just as quickly. I am totally confident humans can't and won't do anything about the latter so whatever sticking plaster policies, electric cars etc, will be shown to fail leading to likely extinction after some fairly unpleasant decades before then.
To place a comment please login Login »