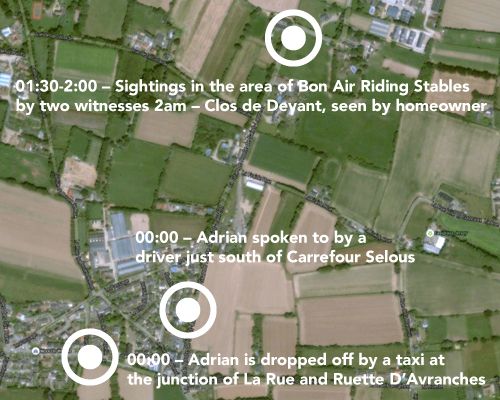 With the police announcement that the search for missing Adrian Lynch has been scaled down, they have issued a list of the sightings of him after he was dropped off by a taxi at Carrefour Selous on the night that he disappeared.

Although the search has been scaled down, officers will continue to follow up more than 100 investigative leads as they try to find the 20-year-old who has been missing since 5 December.

00:00 – Adrian is dropped off by a taxi at the junction of La Rue and Ruette D’Avranches

00:15 – Male seen looking unsteady on his feet by taxi passenger

00:15 – Seen by a driver leaning against a wall, then later lying in the road