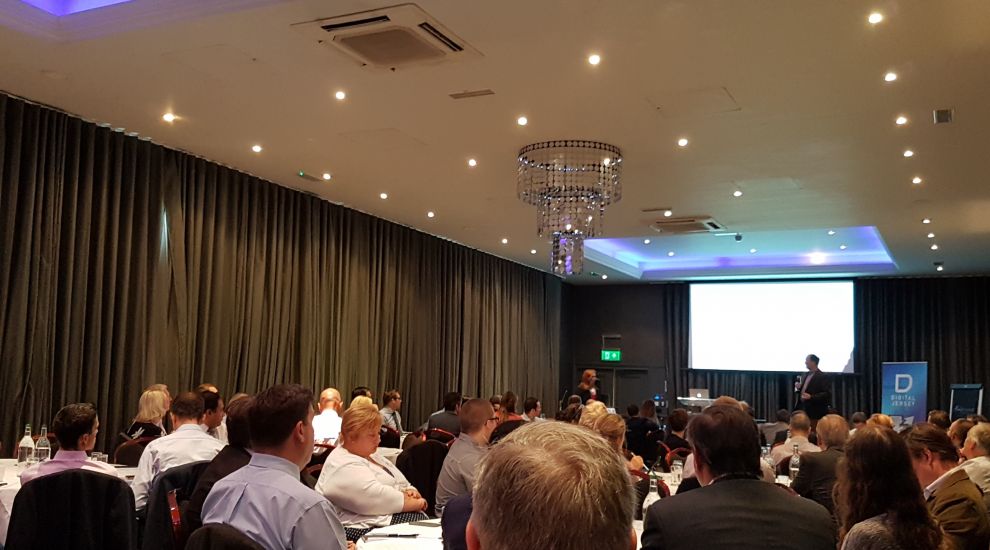 Jersey's first AI retreat opened yesterday at the Grand Hotel with a talk on the impact the new technology will have on the island's critical financial services sector.

Clara Durodié, founder and CEO of Cognitive Finance Group, who organised the retreat with Digital Jersey, said that AI gives clarity and visibility of the huge amount of information that is now available.

Ms Durodié, a business technologist specialising in AI, and a former fund manager, opened the retreat on Thursday after a short introduction by Tony Moretta. The CEO of Digital Jersey said that the retreat marked the "beginning of a journey for Jersey." He explained that the idea from the retreat came from a talk given by Ms Durodié at the end of last year and that Digital Jersey wanted to help raise awareness of the issue of AI and robotic automation.

Ms Durodié said that AI could simply be described as a software, one that make financial practitioners, "...better at what we do by building a better version of ourselves." She said that AI can analyse not only what happened and why it happened but also what is likely to happen and what needs to happen to prevent certain scenarios.

Showing a picture of documents piled up on a desk, she said: "AI does to us what a very organised person would do to this. It gives us clarity and visibility of what information is availability. As we are ultimately looking after people's money, we need visibility."

She continued saying that financial businesses do not have the resources to manage all the information that is available and therefore need tools to help. This is where AI comes into play as it helps organise services better.

The start of #ArtificialIntelligence in Finance #jersey event pic.twitter.com/frRpOB6bDz

According to Ms Durodié, AI is the fourth wheel in the factors of production, land, capital and labour. She said: "AI comes in addition to labour, it is a new life form, a new type of worker. It is a very powerful proposition to have someone doing menial jobs while I am going about my daily life, or even at night while I am sleeping."

As positive as AI sounds, Ms Durodié warned that it can also be destructive if not handled right or disregarded. She told the audience of about 80 people: "If you are not open to understand what this technology can do for you, you are putting everyone at risk. It is unseen, unheard and something we have never met before. We can use this technology to do our jobs better."

Ms Durodié also thinks that everybody should be excited about AI and invest in it, just as China. She said that the country has invested a lot of time and money in research and that they even have a road plan as a nation for the next 13 years to "dominate the world with AI."

The retreat continues until Sunday with several talks lined-up for a selection of 60 delegates from around the world. The programme of the retreat include Flux, the world's first virtual art exhibition, taking place on Saturday at Liberty Wharf.