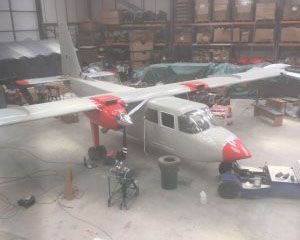 A group claiming to represent angry taxpayers in Croydon have hit out at a pilot who plans to launch an air service linking Jersey to Alderney.

The group have made a series of allegations about Julian Storey's conduct as a former Tory Councillor, which saw him disqualified for absences, embroiled in an expenses-related controversy and chased over an unpaid phone bill. He denies the allegations.

Earlier this month, aviation consultant Mr Storey announced that he would be launching an airline to connect Alderney travellers to the budget carriers operating out of Jersey.

Air Alderney Ltd, as the operation is set to be called, was granted exclusive route licences for Jersey and Cherbourg by the States of Alderney, who welcomed the idea. They’re now working to help the new company obtain its Air Operator’s Licence.

But the Croydon Taxpayers’ Association (Croydon TPA) – an organisation based in Mr Storey’s former constituency – have raised concerns that the pilot’s political past, “…demonstrates that he cannot be trusted to manage public resources or communicate effectively, transparently or honestly.”

In a message sent to Express, as well as the Airline Licensing Authority and the States of Alderney Chief Executive, Croydon TPA spokesperson Mr Brown drew attention to the former Selsdon and Ballards Councillor’s expulsion from Croydon Council for failing to attend the minimum statutory number of meetings.

During an “unexplained” period in absentia of three to six months, Mr Storey reportedly failed to respond to his Council colleagues and constituents, while still claiming £6,000 “expenses” afforded to councillors for the execution of civic duties. The move subsequently led to calls from Council leader Tony Newman for disqualified Mr Storey to reimburse taxpayers.

Croydon Council also claimed that Mr Storey ignored repeated requests to settle an unpaid phone bill of more than £400, allegedly racked up through private use of a council-supplied telephone.

But Mr Storey maintains that, “Nothing illegal, criminal or wrong took place” and that he was neither, “…legally, nor morally obliged” to return the money, which he described as a “salary which had tax and NI deducted from it at source” - contrary to Mr Brown’s claims.

He told Express that his absence began “towards the end of 2005, [when] my flying career really started to take off.”

“I was flying a LOT and found it increasingly hard to attend Council meetings. Because of this, I decided not to stand for re-election in May 2006.”

Despite such absences, Mr Storey stated that “for most of the four-year period, I was one of the more diligent and effective members of the Council with an almost 100% attendance record at meetings. This is a matter of public record...

“The majority of a Councillor's role is dealing with constituents'  issues - pot holes in roads, dog poo in alleyways, etc. I was active in dealing with all of this stuff right up to the very end, so I didn't feel that I had a moral obligation to pay back any of my Councillor's salary either.”

Furthermore, he questioned the legitimacy of the Croydon TPA, adding that he suspected that the claims were made by “someone rather closer to the Channel Islands than Croydon” who "might wish to derail what we’re trying so hard to achieve for the people of Alderney.”

He continued: “Along with our backers, I have put a HUGE amount of effort into the Air Alderney project. As you might imagine, there is still a lot more to do.

"[Alderney] is desperately in need of better transport links, and I think that what we are offering is the best option for solving the issue. We're hoping that it may lead to the start of the regeneration of the Island's economy.

“I've been literally overwhelmed by the number of messages of support for what we're doing from people on Alderney and elsewhere.”