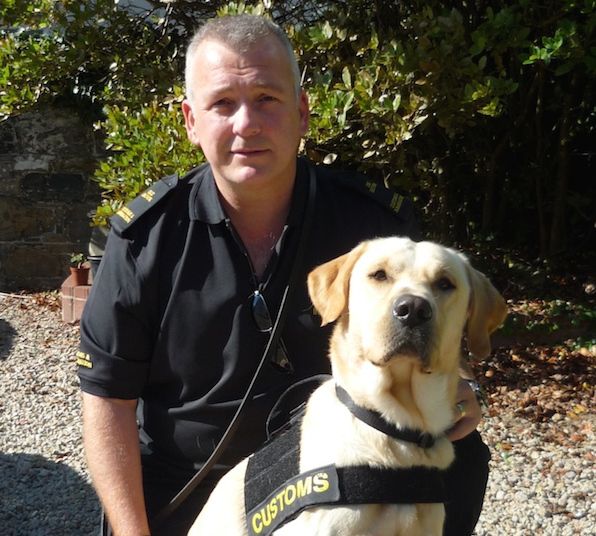 Brutal training methods for Customs sniffer dogs have been alleged by a dog handler who won almost £15,000 in compensation after being forced out of his job.

David Ormsby – who won his case at an Employment Tribunal last month – says he witnessed one officer brutally punch and slap the dog he was training. And he says that he was sacked from his job after more than 30 years after he refused to use such cruel and violent methods to train his dog.

Customs have denied the allegations "absolutely", and have commissioned an independent review into training methods.

Mr Ormsby's case has made the national press after he claimed his colleague punched his dog in the face, knocking it across the room and violently shook it after it had urinated in the customs office.

He also says that he offered to buy the dog that he had been training – a golden Labrador called Buddy, who had been living at his home in St Lawrence with his wife and 11-year old twin boys for months before he lost his job – but was refused and the dog was shipped off the Island the following week.

"The training initially was really good, they use positive reinforcement, what I had a problem with was positive punishment.

"The incidents - two in particular – one where the other Officer bent over to do his shoelaces up and his dog licked his face. The officer punched him in the face and the dog rolled across the floor, it was totally inappropriate.

"Another time the dog urinated in the Customs office and he slapped or punched, he certainly slapped the dog in the head, grabbed him by the back of the harness and shook him up and down violently. He lost his temper but I kept being told by the trainer and the other handler that it was proportionate.

"But if the dog did anything wrong then there are ways to deal with it, you never pick it up and shake it violently.

"It was terribly upsetting, there was no way that I was going to treat my dog like that, but I was told that I was treating it too much like a pet.

"I lost my job because I said I would not be inhumane. There's absolutely no way that I would be inhumane to my dog. Buddy was the most loyal dog and he's been ripped from our lives. It's heartbreaking."

Mr Ormsby says he isn't the only one to have been disturbed by the way Customs' dogs are being treated. He said he knows other officers have complained about incidents they have seen and have been told it's proportionate but he argues that it's not right for any well trained dog to be hit.

He was offered other jobs as a weighbridge operator at Bellozanne, a paycard clerk or traffic warden, but refused those, and was fired the day before Christmas due to his capability and for failure to identify alternative employment.

Mr Ormsby, who is still signed off sick six months later, was awarded £14,527 by the Employment Tribunal – 21 weeks' pay - but says it's not about the money.

He said: "The unanimous decision was that to dismiss me on the grounds of capability was not the actions of a reasonable employer therefore I was unfairly dismissed.

"I'm absolutely thrilled that we've got the unfair dismissal but I want the people involved held accountable – the senior staff at Customs that listened to a trainer and not to me who had been there for 32 years.

"It has destroyed us emotionally and financially but I have had so much support from existing colleagues who've said keep your head up high and said 'You've done nothing wrong David'.

"It's not about the money but principle and justice, I refused to bow down to them and I don't want this to happen to anyone else."