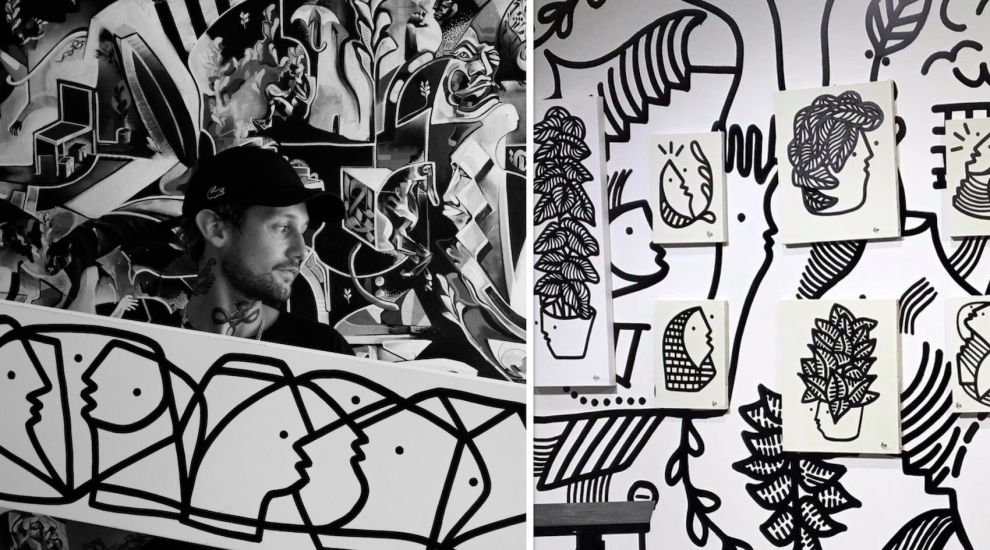 A local artist with a distinctive monochrome style that has graced walls all over the island has shared how his passions for art and skateboarding influence each other.

A celebration of art and skateboarding 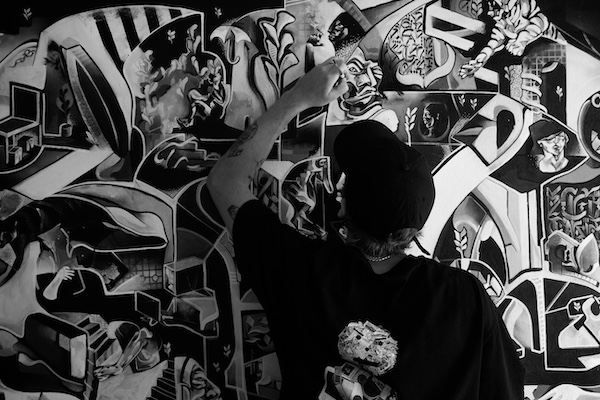 As part of its Pop Up series, ArtHouse Jersey will be celebrating art and skateboard at its Greve de Lecq Barracks’ HQ this weekend (Saturday 18 and Sunday 19 September).

Local artist Glen Fox, whose monochrome style is on display on several murals around the island, will be on deck to talk about his work and what inspires him.

Glen has been fascinated with art from a young age. He first began drawing at the age of eight years old inspired by the influence of his gran who had bought him a sketchbook. 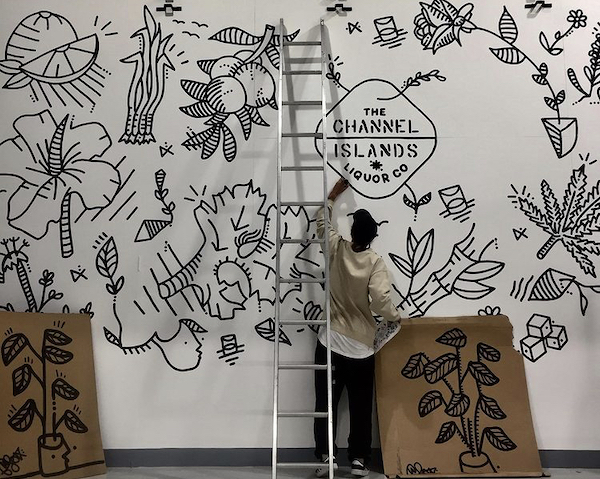 Pictured: Glen likes to freestyle both when he draws and skates.

“Sometimes it’s purely a case of skating around and feeling so inspired that I need to express myself in that moment,” he explained “It’s always been purely straight from my thoughts and surroundings. To me, art is always more pure when it reflects you as a person, your characteristics and your experiences in that one moment.”

While he started painting landscapes in a “traditional” way, Glen’s style has evolved over the years. A two-year course at Highlands pushed him to find his style, which, like his skateboarding, is mostly freestyle, “straight from the brain to whatever I had within my reach”.

“It was not until I was 19 that I picked up my own style,” Glen said. “I don’t have to write my name on it, it’s quite important as an artist to find your trademark without having to write your name.

“I have kept the same structure concept but since then I have polished it. I have put the brush down, I used to start painting before drawing but then I started drawing first, there’s more of a graphical side. I just like exploring.” 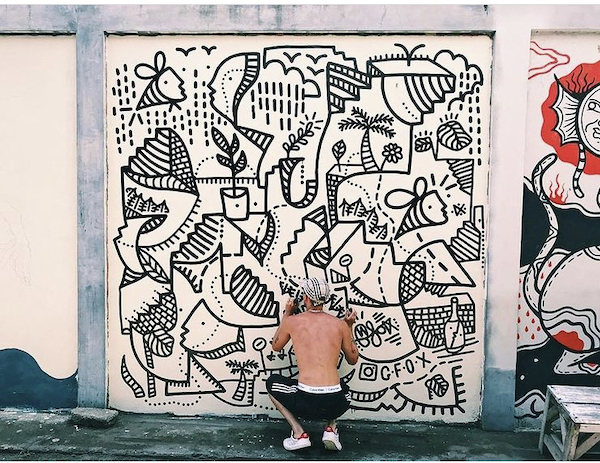 Pictured: Glen currently has several murals "on the broil".

Having recently quit his job as a painter decorator to become a full-time artist, Glen has several murals “on the broil” including a colourful one on Great Union Road.

While early on in his career, he struggled to find walls to paint on, he says it is a relief to see that people are now more open to street art.

“I would love to see more murals in the streets,” he however added. “It could be a little bit more colourful. I always find a new wall that I want to try.”

To accompany Glen’s exhibition, DJ Dom Hirani will take to the takes on Saturday 18 September between 14:00 and 18:00. A small skateboard ramp will also be erected on the grounds nearby.

Elizabeth Castle in the spotlight 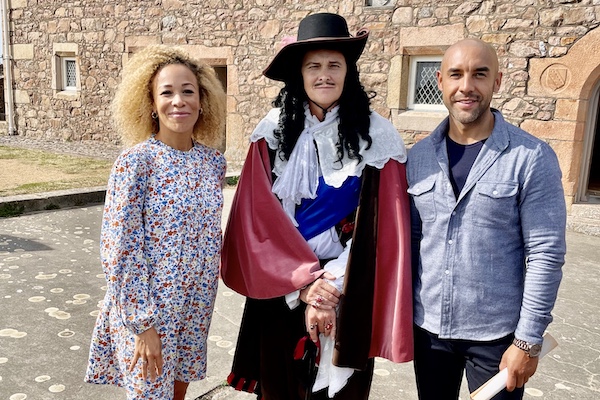 Alex Beresford and Ria Hebden of ‘All Around Britain’ filmed an hour-long episode of their show at Elizabeth Castle on Monday.

The episode is due to air this Sunday 19 September at 11:55 on ITV and will feature the castle’s cannons, King Charles II and a tour of the hospital block among other things.

“Our brilliant Jersey Heritage team buzzed around, doing everything they could to help to showcase the best of the Castle for the ‘All Around Britain’ film crew,” Jess Stanier, Jersey Heritage’s Marketing Manager, said.

“Visitors were very excited to see Ria and Alex, and crowded around to watch the presenters help our Gunners to fire the cannon, be given a private tour by King Charles II and to see them disappear into the Hospital Block with Volunteer Guide Sue, equipped with fetching yellow hard hats. 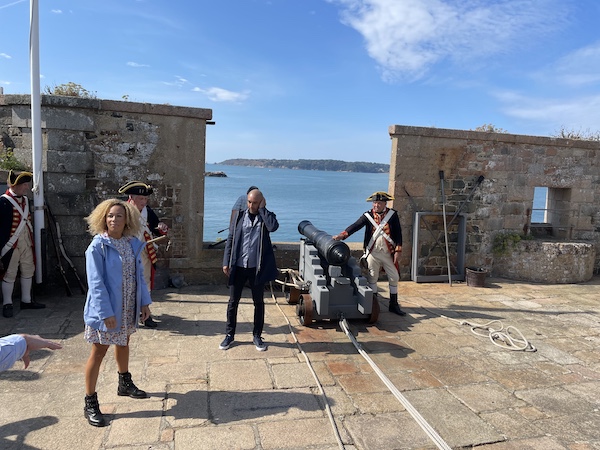 Pictured: The episode featuring Elizabeth Castle is due to air this Sunday 19 September at 11:55 on ITV.

“Our Ferry Manager George also made sure the film crew got the very best view on their sailing to and from the Castle. It was a really exciting day for both visitors and our team to be involved in.

“We hope the show gives Elizabeth Castle the spotlight it deserves, as well as helping us at Jersey Heritage to share our big restoration plans for the historic site.”

St. Ouen’s Bay and the Occupation

Video: The event will be held in St. Ouen's Bay and focus on the location Occupation history.

To mark the 50th Anniversary of the Channel Islands Occupation Society (CIOS), the Jersey National Park will be co-hosting the first in an annual series of ‘Time in the Park’ events.

Focusing on the history of the Occupation, the event is being held in St. Ouen’s Bay, the largest designated area of Jersey’s national park and the location of the island’s only remaining Atlantic Wall, which has some of the best preserved WWII defence fortifications in Western Europe.

The public are being invited to discover more about the period through a photographic exhibition, held at the Frances le Sueur Centre and tours of the Moltke Battery at Les Landes and The Strongpoint bunkers at La Corbière. 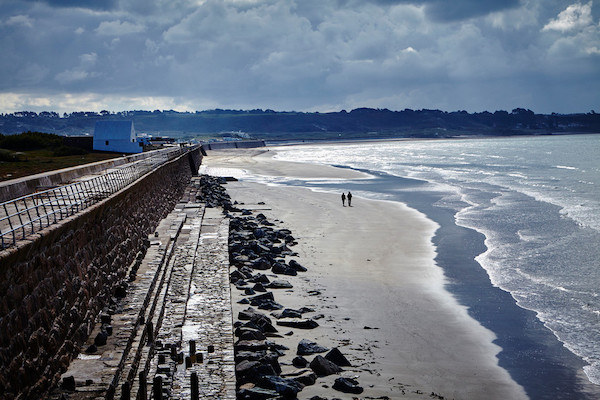 Pictured: St. Ouen’s Bay is the location of the island’s only remaining Atlantic Wall, which has some of the best preserved WWII defence fortifications in Western Europe.

Tony Pike, CIOS’ Secretary, added: “The Society is run by dedicated members who are passionate about telling the story of the Occupation, so it can be passed down the generations, as well as from the conservation of what remains of the War on our island today. They play an important role to ensure the long-term preservation of German fortifications and artifacts from those unforgettable wartime years.”

“50 years is a remarkable achievement, especially when it is considered that, a few decades ago, German fortifications were still viewed as 'scars on the landscape' and should be buried or destroyed. Today, we are able to learn from this fascinating period of history. We’re looking forward to working with the Jersey National Park on this fantastic initiative.”

Enjoy Shakespeare in the Park… 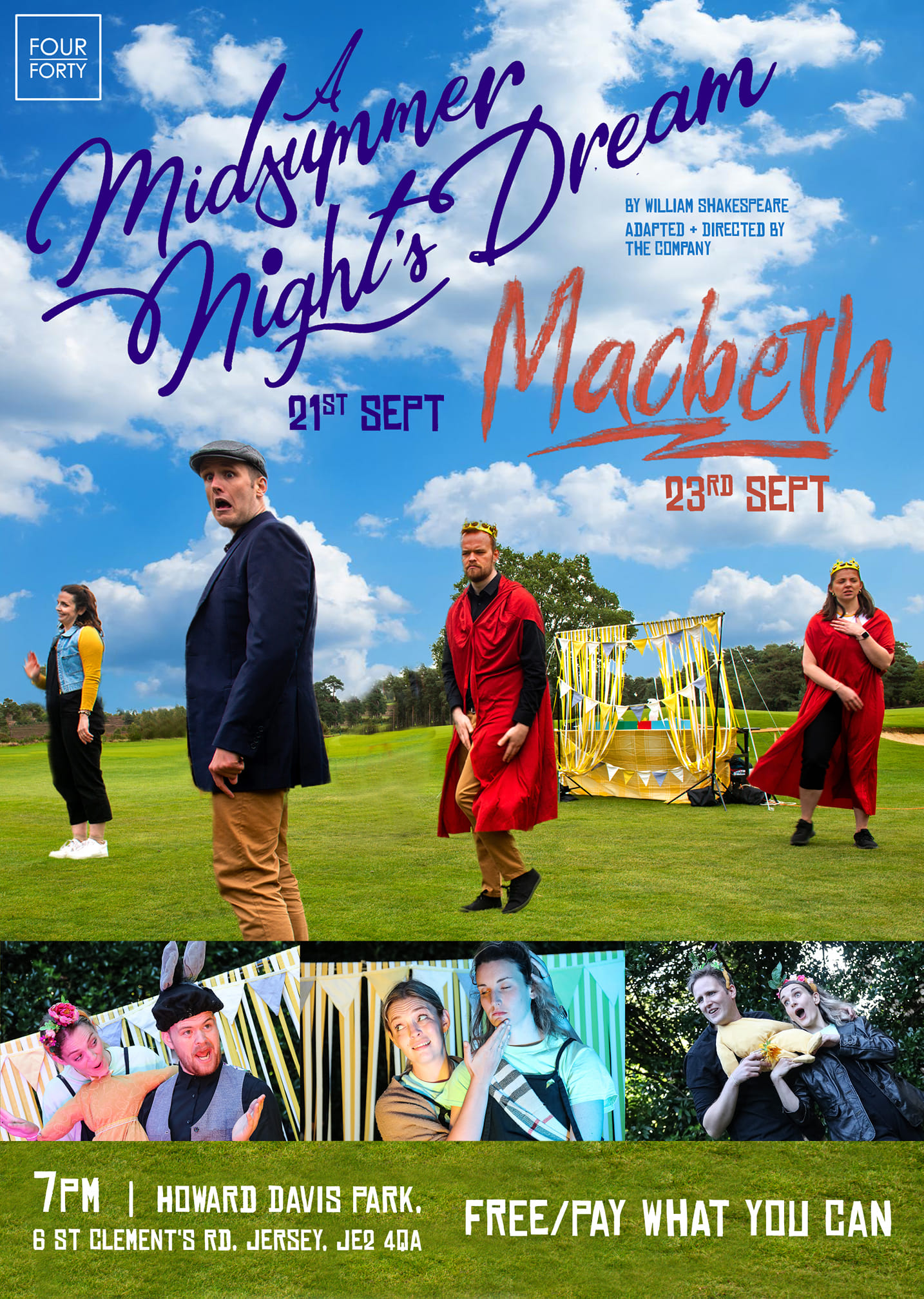 Pictured: The performances at Howard Davis Park are free but a collection will be held.

440 Theatre, a company of four professional actors delivering pieces of theatre in 40 minutes, will be at Howard Davis Park next week.

On Tuesday 21 September they will be performing ‘A Midsummer’s Night’s Dream’ followed by ‘Macbeth (a comedy)!’ on 23 September.

Both performances are set for 19:00 and whilst they will be free, spectators are invited to make a donation to support the work of the company.

…or sing-a-long in the Park 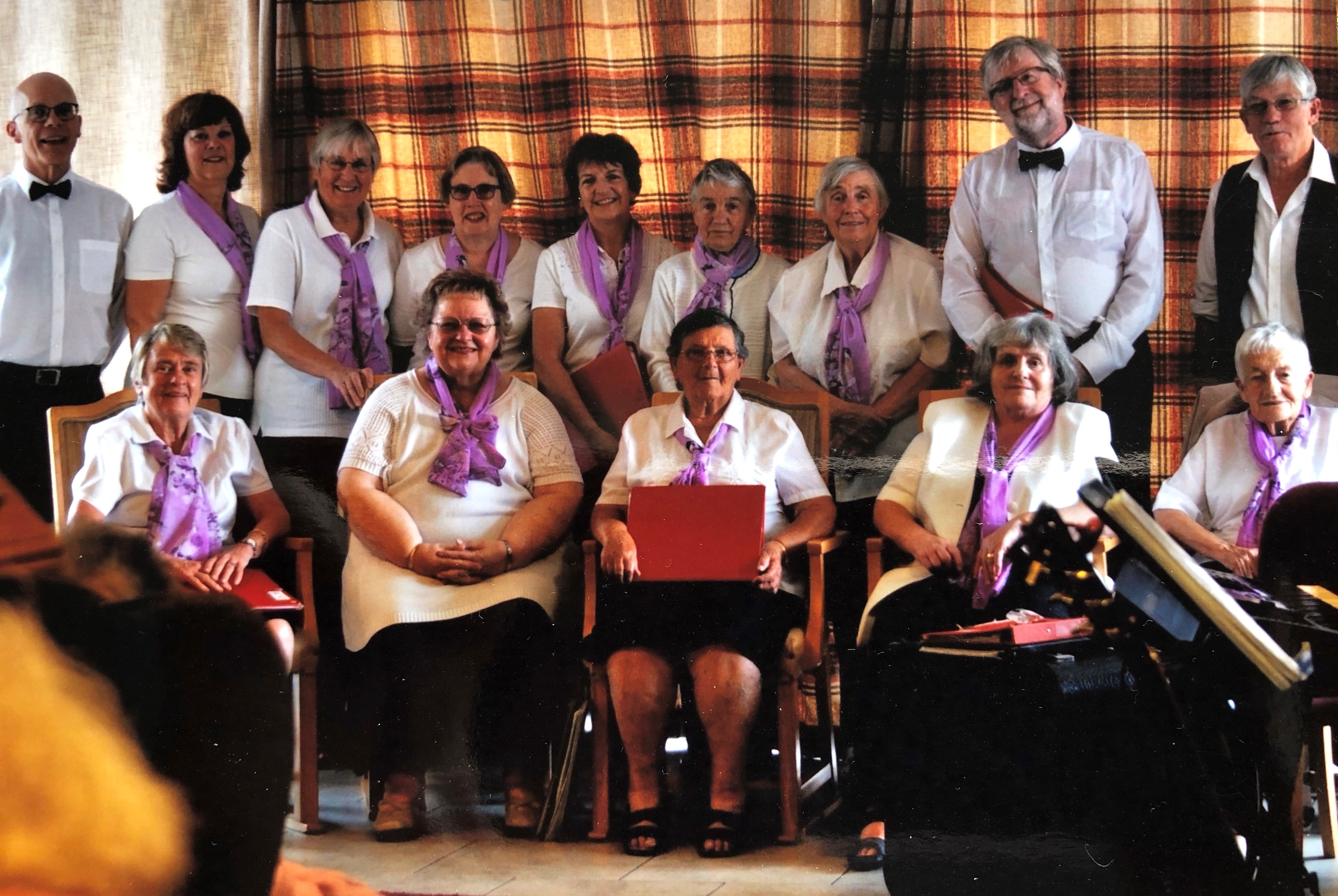 If singing is more your thing, the St. Lawrence Minstrells will be at Milbrook Park on Saturday 25 September for a sing-a-long.

With music from the 40’s and 50’s the singers hope to raise funds for Sanctuary Trust, a local charity which provides accommodation for up to 125 homeless people across four sites as well as operating an outreach service for ‘rough sleepers’.

Earlier this year, Sanctuary Trust announced plans to open the first facility dedicated to homeless women, providing accommodation for up to 20 women.

“We are delighted that the St Lawrence Minstrels are bringing back the good old days with their organised sing-a-long for Sanctuary Trust,” the singers said.

“We really hope to evoke some memories with songs from the 40s and 50s and raise funds for our new women’s home at the same time.”

Seats and refreshments will be available.

Young readers are being invited to design a new book cover for the best book they’ve read this summer as part of a competition organised by Jersey Library and the Channel Islands Children’s Book Award.

The best cover will win its designer a year’s family membership for Jersey Heritage.

Entries must be submitted either at one of the libraries or via email to je.library@gov.je before Saturday 25 September.

Blues at the bar

Blues star Giles Robson will be collaborating with international stars in the blues, rock and roots world to unique shows as part of a new concert series at the Blue Note Bar.

On 28 and 29 October, Giles will be sharing the mike with Kyla Brox and Roxana Stroe, the daughters of British blues legend Victor Brox and legendary Romanian Jazz drummer Corneliu Stroe respectively.

The popular Italian band the Cinelli Brothers and UK blues sensation Tom Attah will follow on 25 and 26 November and 16 and 17 December.

Tickets for the blues nights are available from the Blue Note Bar or online.