ART FIX: One year, 52 portraits... Welcome to the House of Mirrors 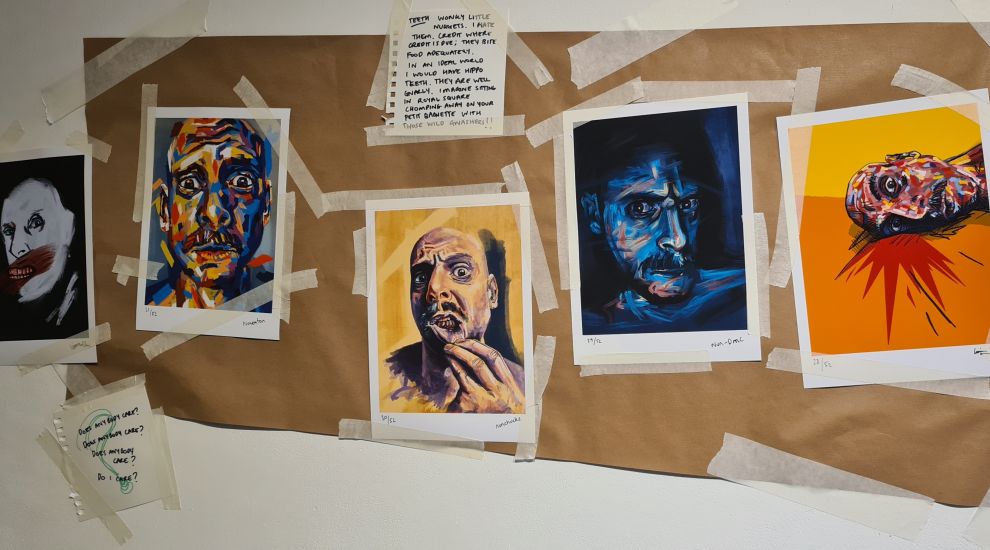 ART FIX: One year, 52 portraits... Welcome to the House of Mirrors

Islanders are being invited to step into a House of Mirrors charting one local designer's journey through lockdown and beyond... one weekly self-portrait at a time.

Pictured: Liam spent a year creating a self-portrait every week.

For the past 10 years, Liam Nunn has been working as an animator and graphic designer in the creative, marketing and advertising industry.

While he enjoys the work and it has allowed him to build a career out of his “arty, creative mind”, Liam says he prefers “pure art”.

“It’s a great job, the industry and the brilliant colleagues and clients I have worked with have taught me a lot,” he said. “But pure art is my side hustle and real love, where I can explore my brain without boundaries for my own amusement. The problem is, though, I don’t do it enough, not even nearly enough.”

Left feeling like he was “wasting his talent”, Liam decided to force himself into “doing” during lockdown, giving rise to a project that kept his creative juices flowing for a whole year.

“Buying an expensive iPad was the solution because I had to use it, or I would be in trouble!” he said. 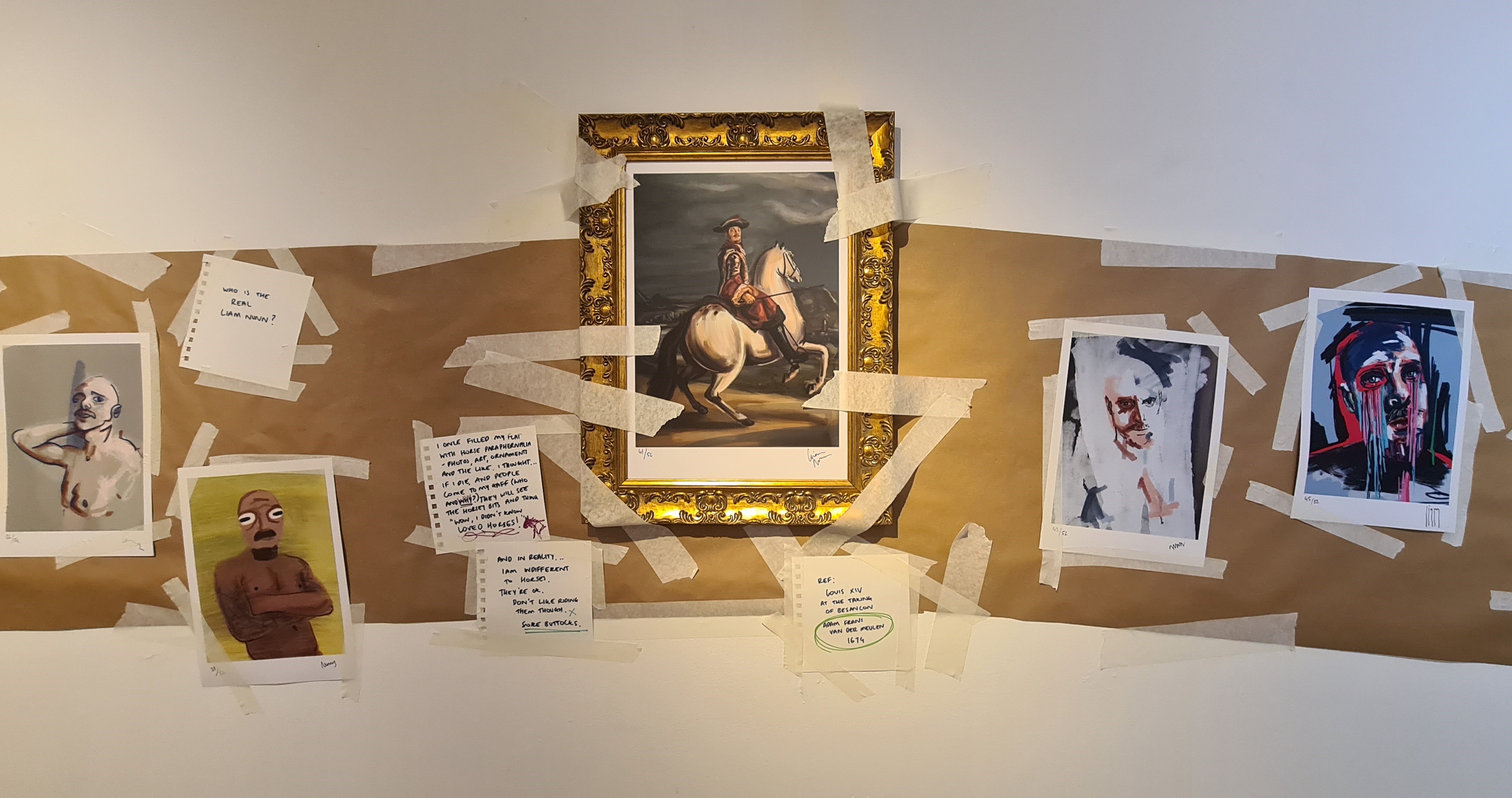 “I set a loose silly task of doing a portrait every week. The journey was about forcing me to break the cycle of self-critique. Seeking creative joy with no expectations. I normally hate setting creative boundaries, but something compelled me.

“It could have been any subject matter, but I absolutely love portraiture - I am not fussed about landscapes or buildings or still life. Give me eyes, hairy ears, wonky noses and dodgy teeth please. I picked my own face as I had easy access during lockdown and also it allowed me to explore beyond the first view, delving into the raw without the potential of offending the sitter! I do like to explore the unusual and the uncomfortable.

The project was Liam’s first “proper play” with digital art as he normally prefers paper and pencil.

“To my surprise, when I jumped in, it suited me,” he recalled. “It was easy pick up and put down without getting equipment out or getting messy, I didn’t have to wait for paint to dry and I could press a cheeky undo when I did a little ‘whoops’. I enjoyed my first dabble but wanted to get better and practise is the only way to get better at things right? 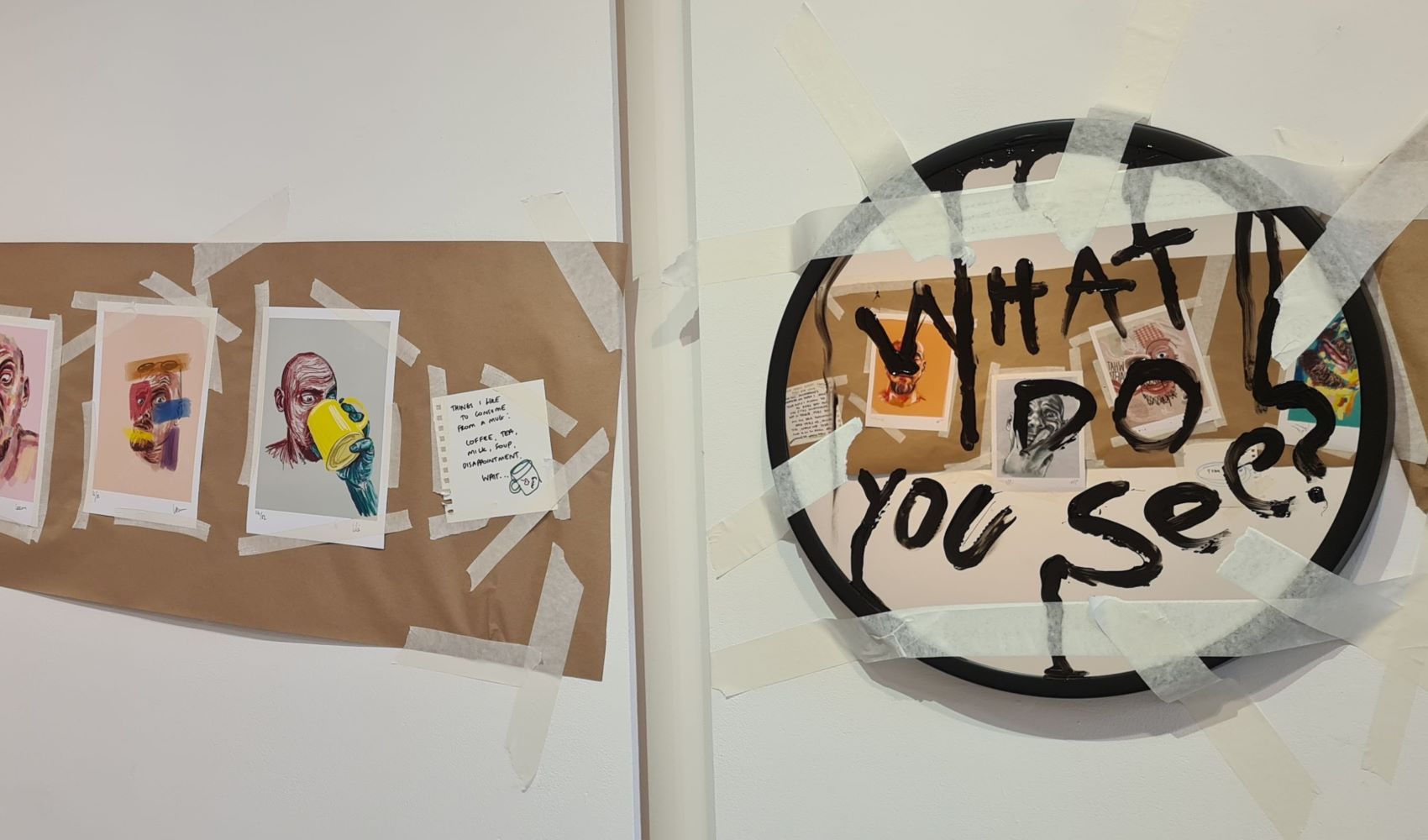 Pictured: All 52 portraits at the Link Gallery.

“Most weeks, I had no idea what I wanted to produce, beyond the obvious representation of me, and it was a nice surprise to see what came out of my head each time. I didn’t get too precious, I put plenty in the bin, but I stuck to it. One a week, that’s it, even if I wasn’t sure it was ‘finished’.”

Liam said he had been surprised to see how much support his peers gave to the project. While he simply thought it would get a “like of gentle approval”, he didn’t expect it would be received with “joy”. 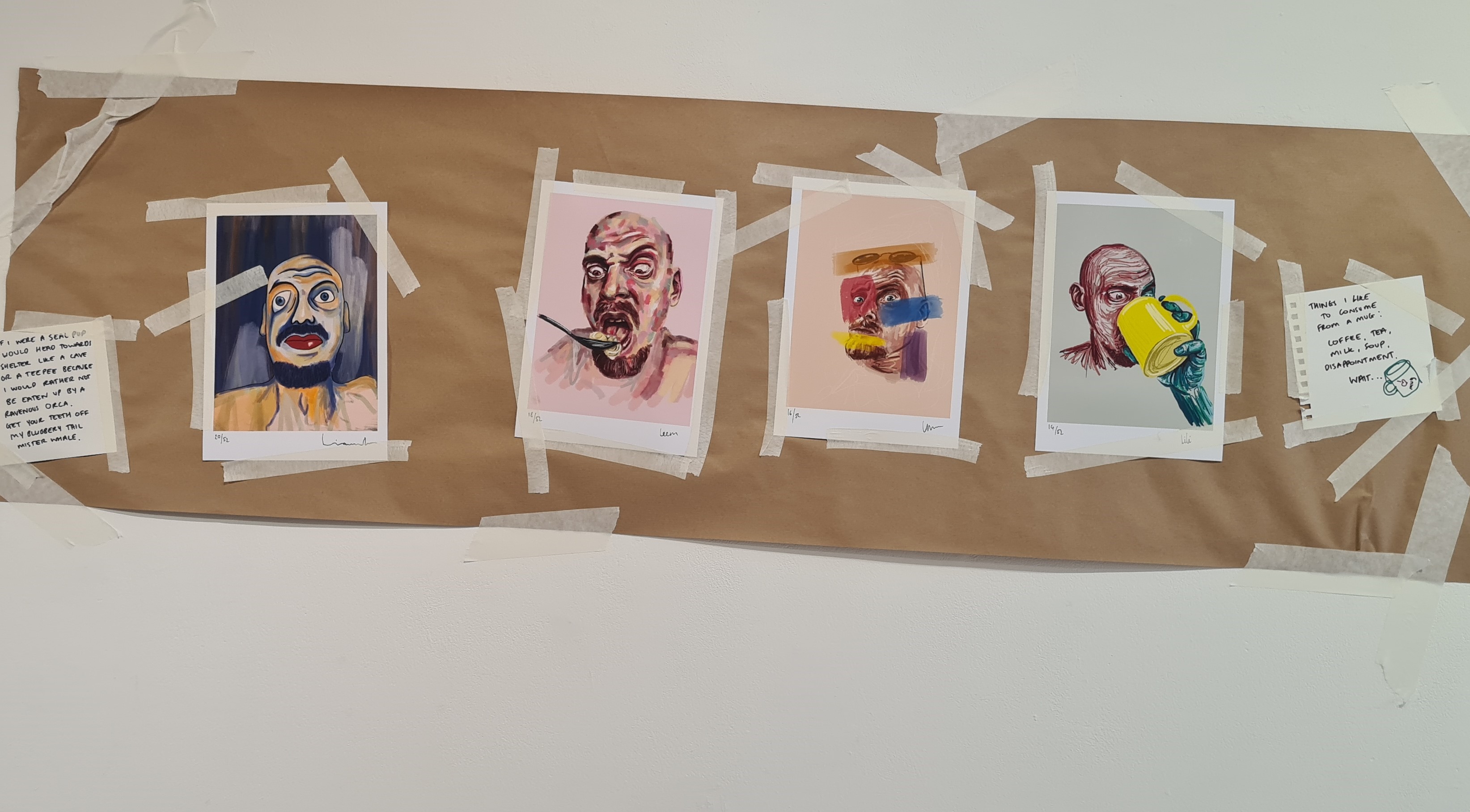 Pictured: Liam is now seeking to curate 52 portraits of himself from other creatives.

This month, in addition to launching ‘Milk Creative Studios’, Liam is presenting his self-portraits at the Link Gallery at Jersey Museum. But ‘House of Mirrors’ is not the end of the self-portrait project.

Liam is looking to curate 52 portraits of himself - to be released one-a-week, of course - produced by anyone, of any ability, to continue the journey.

“I want to see different mediums and approaches; digital, real paint, pencil, biro, photography, a cake face or whatever,” he said. “I want people to do a piece of art if they haven’t for years, or even since school. Ideally I’m hoping to springboard others into their own projects after, whether those projects are art-based or other creative endeavours. Making things is best.” 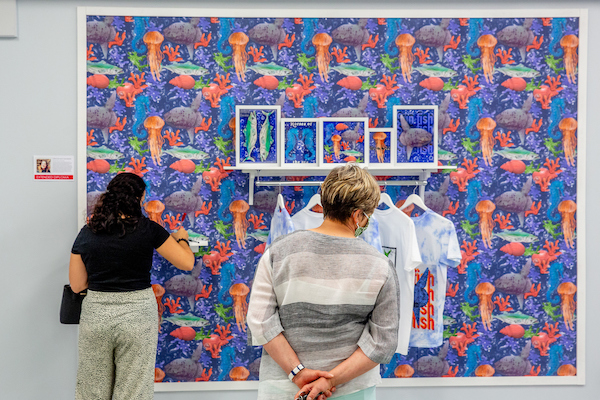 Pictured: The School of Art students are showing their work at the Arts Centre.

After one of its most successful exhibition to date, Highlands College’s School of Art has taken over the Berni Gallery at Jersey Arts Centre.

‘Bright Young Things’ brings together work from some of the L3 year 1, L3 year 2 and Foundation Diploma students who were all encouraged to explore a theme of their choice, from the environment to mental health, feminism, economics and even laundry.

The work presented is only a sample of what the students presented at the College in June.

“This year, their work is a lot more politicised, a lot more self-conscious,” said PJ Thompson, the head of Art and Design “There are things about the male gaze, male empowerment, child abuse, the environment, the LGBTQ cause, disability… The majority of their work has been about looking outwards, there is more of a global consciousness. These kids just have their own point of view.

“One student's body of work is about anti-Asian racism, looking at their cultures and the racism they received.

“The work is definitely more global. There was so much in the media about MeToo, Black Lives Matter, about being woke and wokeness. Kids are aware of all of this, being off college and at home, all they had was media and social media to entertain them and they became more aware of global issues.”

The ‘Bright Young Things’ will now be moving on to the next step of their artistic career, be it studying Women’s Wear at the Royal College of Fashion, Illustration at Arts University Bournemouth or coming on to the next level of study at Highlands College.

From a photograph to a bronze sculpture

A bronze sculpture of a little girl has recently taken up residence on the site of the former Beach Hotel in Gorey.

Made by Jersey-born sculptor Kate Denton, who graduated from Goldsmiths and is now based in the UK, the sculpture is titled ‘Elizabeth’ and was inspired by vintage photographs of children sitting on the sea wall near the old railway track.

The project was facilitated by Chris Clifford, Director of Private and Public, who said the developers felt it would be “an appropriate reminder of what used to be there”.

A quick scan for a bit of history 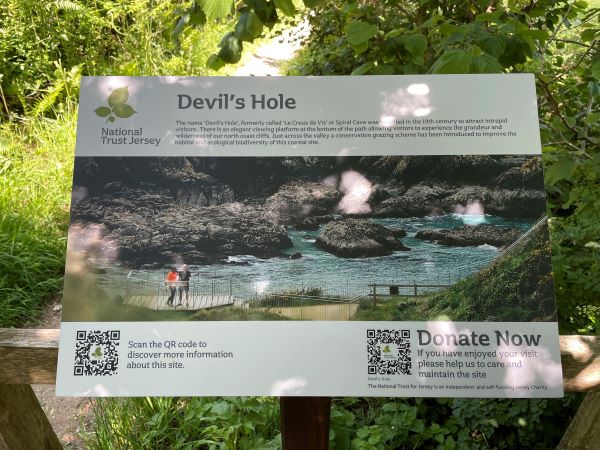 Pictured: The National Trust for Jersey has installed QR codes at some of its sites.

QR codes have been placed around the island to provide digital information and interpretation on National Trust for Jersey sites, based on the charity’s mantra of ‘discover, enjoy and protect’.

This includes historic images of some of the sites kindly provided by the Société Jersiaise.

It is hoped the initiative will also encourage people to become members and/or raise donations to support the Trust’s vision to care for these special places for ever and for everyone. 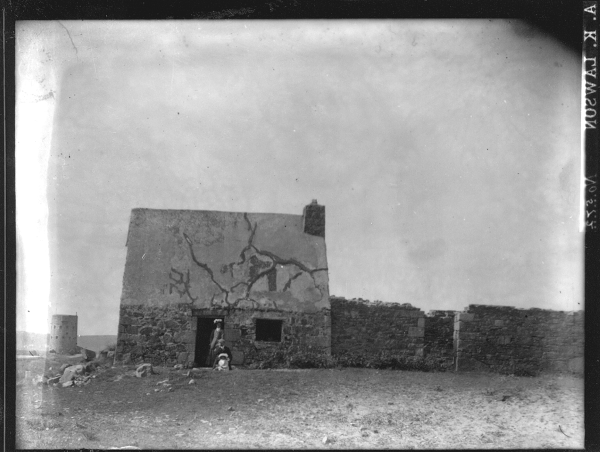 Pictured: Some of the new signs include historic images of some of the sites kindly provided by the Société Jersiaise.

At Devil’s Hole for example, visitors can discover that the ‘hole’ is a natural crater caused by the sea gradually eroding the roof of what was once a cave and that the name ‘Devil’s Hole’ albeit dramatic, was only invented in the 19th century as a means of attracting intrepid visitors.

They will also learn that the site was generously donated in 2006 by the Clarke Family enabling the Trust to protect it and undertake essential maintenance including the repair of the steep footpath down to Devil’s Hole - the first of many tasks undertaken by the charity as part of its Coastline Campaign.

The QR code signs have replaced existing signage already in situ, which had become rather “tired”, at each of the sites. At the Wetland Centre, it sits aside the existing interpretation and cash donation box.

You, Me and the Sea 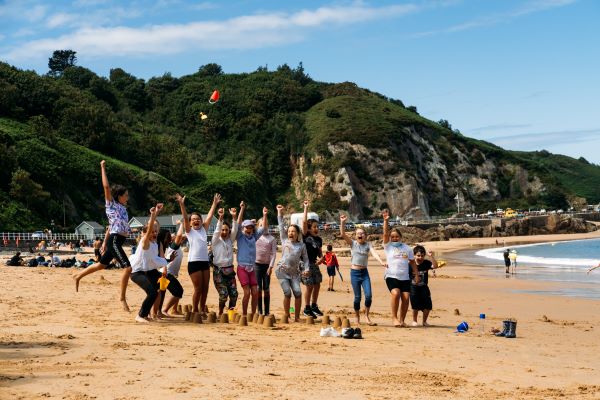 Pictured: The children will be exhibiting their work next weekend at Greve de Lecq Barracks.

Local children have been exploring their creativity as part of a summer art school organised by ArtHouse Jersey.

Entitled ‘You Me and the Sea’, the series of three-day art-based workshops for children aged 8 and 11 will culminate in a weekend exhibition at Greve de Lecq Barracks next weekend, on Saturday 14 and Sunday 15 August.

The scheme has seen students take part in activities ranging from sculpting to printmaking and sketching. Alongside the art-based activities, children have also been to the beach every day and took part in Jersey Marine Conservation’s ‘Butterfield Marine Watch’, exploring rock pools and becoming creatively inspired by their environment.

The children taking part in the initiative have been selected by the charity, CYPES and three St. Helier schools, either because they show particular promise in the arts, or because they’d not have otherwise had the opportunity to be involved in such an initiative. 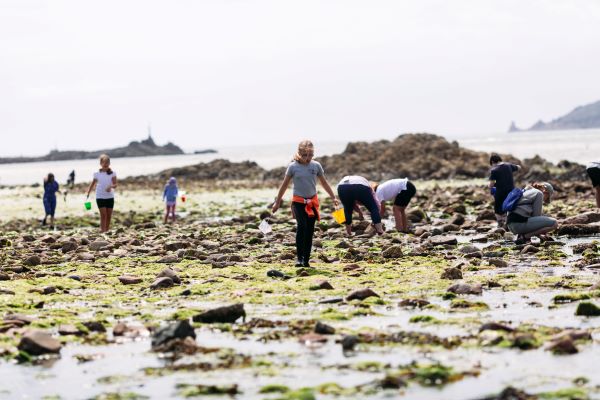 Pictured: Children have visited the beach every day as part of the scheme.

The project, which is currently running as a pilot, could be extended to more students in the future.