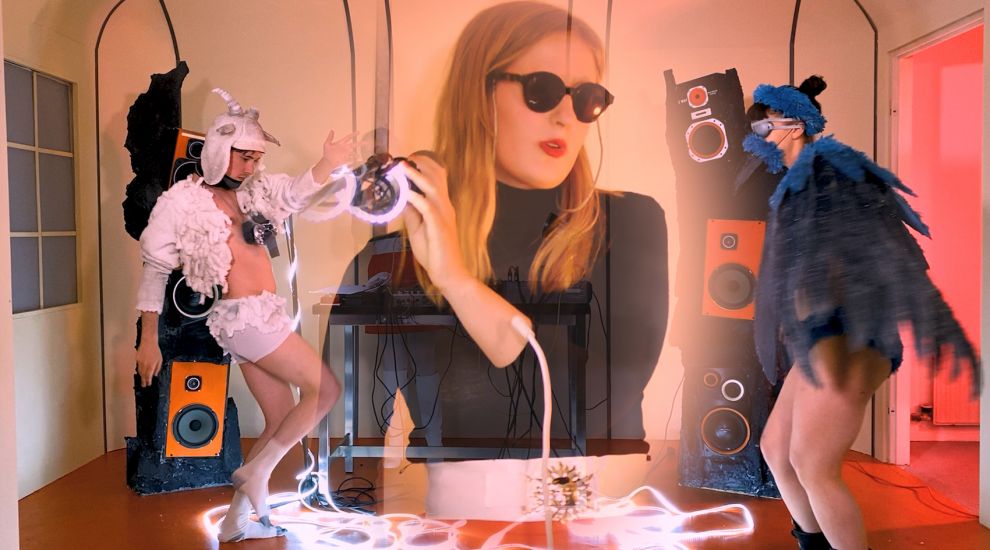 A Jersey man, who became involved in experimental work after joining an Amsterdam university’s ‘Dirty Art Department’, has brought a flavour of Netherlands creativity touching on themes ranging from social control and class privileges to QAnon.

Artist and film-maker Leslie Lawrence has teamed up with artist and designer Sophia Simensky to present a selection of contemporary art and design from the Netherlands, including sculptural installation and video works.

The ORANJERSEY programme aims to bring young Dutch artists to present their work on the island, with the first exhibition taking place until 12 February at Jersey Arts Centre.

Born in Jersey, Leslie studied theoretical psychoanalysis at University College London before moving to the Netherlands to join the 'Dirty Art Department' at the Sandberg Instituut, Amsterdam, where he met Sophia.

“It's a project that regards art and design with a very wide definition and puts an emphasis on radical social ideas,” he explained. “The arts education in the Netherlands is some of the most interesting in the world as it allows for temporary courses and experimental structures that fit more closely with concerns in the contemporary art world than more traditional courses."

In Spring 2020, the pair received funding from Amsterdam Funds for the Arts to produce a piece of work in response to the covid-19 pandemic. They created a video called 'The Fire Sermon' which addresses the economic instability created by the pandemic “through a fictional setting where the sense of crisis is not underpinned by the biological reality of a virus”.

“At the time of making the film, I was very interested in the book 'Bullshit Jobs' by anthropologist David Graeber that basically put forward the idea that rather than being an actual market, employment was mostly about social control and maintaining class privileges,” Leslie explained. 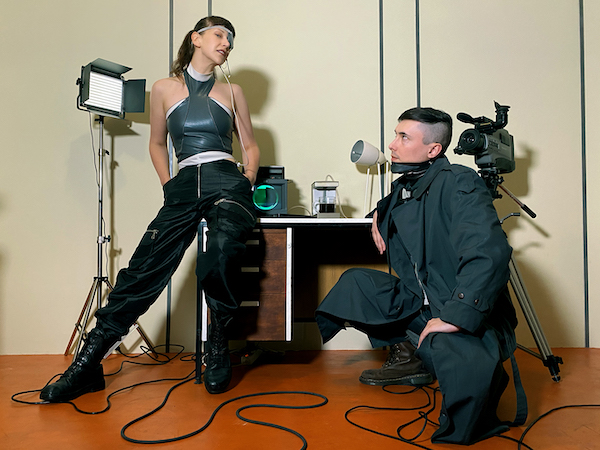 Pictured: Sophia and Leslie in 'The Fire Sermon'.

“When the lockdown arrived it basically confirmed his thesis as jobs were divided into essential and non-essential, but money was found to maintain the comfortable positions of the now entirely idle professional managerial class in a way that would have been unimaginable in the preceding decade of austerity.

“Of course, if you survey people, they regard 'artist' as the absolutely least essential job of all and this is also something we reflect on! I also had a strong desire to throw someone through a window which I'm glad to say makes it into the film.”

Following this collaboration, a discussion between Sophia and Leslie planted the seeds for the ORANJERSEY project.

“My initial motivation was quite simple - I was born on the island and my family lives here, so I was thinking about returning more often, especially with the pandemic limiting travel for the last two years,” he explained. “It was Sophia who actually encouraged me to think about an exhibition and I thought this was an excellent idea as it was a chance to see not just my family but enter public life on Jersey.

“Knowing that I was thinking about a regular return, rather than a one-off event, the idea was to put an additional emphasis on presenting other artists but using my heritage as the link between Jersey and the Netherlands.

“This is quite normal for me as I always make work co-operatively and so had many close collaborators who I thought would be interesting to feature them and then the idea of a cultural exchange felt like an opportunity to do something unique.”

Their project received the support of the Creative Industries Fund NL whilst the Jersey Arts Centre agreed to host the work.

As well as ‘The Fire Sermon’, the first exhibition will feature Sophia’s new solo work, inspired from her research into the blue mountain region of Pennsylvania.

“She tries to show how the ideological foundations of the ‘Keystone State’ rupture into present day America revealing an ideological legacy of colonialism,” Leslie explained.

“It's very interesting stuff because she has so much specific historical research into religious groups and mining communities but then her background in theatre allows her to take this scenographic approach where you get all these different artefacts mixed in with her creative writing.

“I think it's something that is becoming more and more relevant as we can see an expectant millenarianism in groups like QAnon that is equivalent to some fringe beliefs in a great transformation of society from the English civil war onwards.”

A special presentation of audiovisual works by artists working in the Netherlands will also be shown during the VIDEORANJERSEY event on 25 January at 19:30. This will include work by Diana Al Halabi, Veronika Babayan, Baratto & Mouravas, Alban Karsten and Kitty Maria.

“These are all very exciting up and coming practitioners in the Netherlands, so I encourage everyone to get a ticket as soon as possible!” Leslie said. “I also have another work in the screening where I get hit in the face multiple times for various reasons relating to an evil anarchist computer.”

As for the future, Leslie hopes ORANJERSEY will help him make more connections to the local professional arts network. He also hopes to secure funding to repeat the event every year.

“The arts provision on the island has professionalised exceptionally well in recent years and I'm very interested to meet the organisers of the residencies and exhibitions that have impressed me a lot,” he said.

“I'm looking for continued support to hopefully make this an annual project, with a new artist from the Netherlands being presented each year, so if anyone reading is interested in the project and would like to offer any sponsorship or resources, I'm very happy to be contacted.”

Oddsocks will be returning to Jersey Arts Centre from Monday 17 to Saturday 22 January with a trio of actors performing two Shakespeare plays in one night.

Founders Andy Barrow and Elli Mackenzie will be joined by Oddsocks favourite Jack Herauville - who might be recognised for his show-stopping ‘fisherman’ in last years’ ‘Comedy of Errors’ - as they present ‘The Bard’s Best Bits’.

The double bill will feature wicked witches, witty lovers, clever disguises and life-sized dummies as the trio performs ‘Macbeth’ and ‘Much Ado About Nothing’.

During their time in the island, the theatre company will run a workshop for adults on Saturday 22 January from 10:00 to 13:00 teaching participants all about acting, directing and presentation techniques.

The former London lawyer turned part-time administrator and ink-based artist specialises in detailed pieces with an oriental style, stemming from a childhood interest in ukiyoe, a 17th century form of Japanese art made famous by Hokusai and Hiroshige.

“I have always been interested in Asian cultures, but a trip to Japan and visiting Hokusai’s museum before the pandemic inspired me to draw in a similar style,” Theo said.

After putting his oriental style to the test in illustrations featuring Elizabeth Castle, Awabi and Hamptonne, he decided to update a traditional Japanese setting with Jersey’s “very own tea and coffee institution” and encourage islanders to “drink in the detail” via prints of it.

Only the best at CCA

CCA Galleries International is currently presenting a set of ‘greatest hits’ from its best-selling artists.

A number of sculptural pieces is also on display.

“We love the idea of marrying both our prints and sculptures to create a dynamic that becomes a work of art in and of itself,” the team explained.

Jersey Library is now offering free e-audiobooks through a partnership with BorrowBox.

Islanders can register using their Jersey Library membership number and borrow books either through the website or through the BorrowBox app.