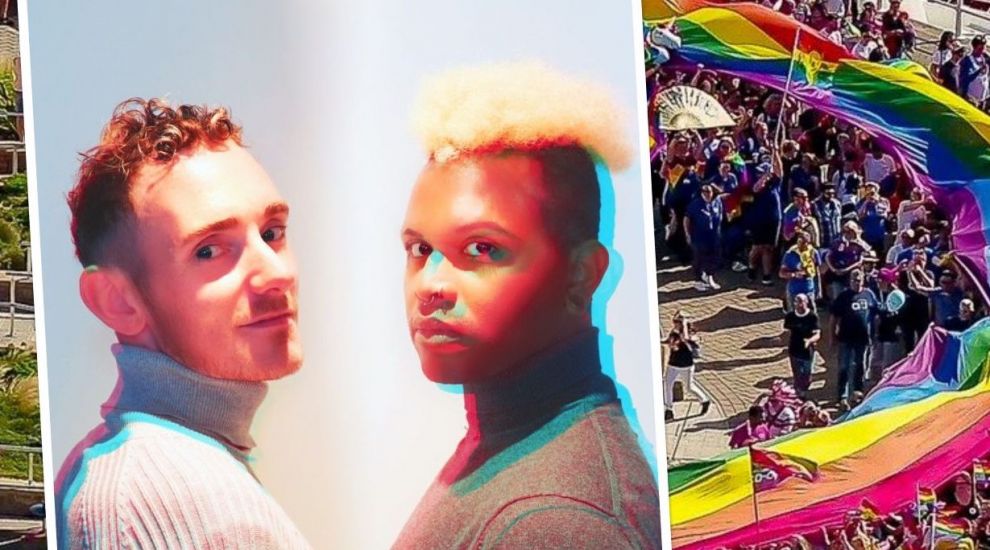 A darkly musical 'supervillain' will be mixing with his poppy 'nemesis' in a colourful virtual showcase of the islands' LGBTQ+ community this weekend.

“We will go big or go home”

Although the Pride parade and festival had to be cancelled in light of the island's high levels of covid in July, the organisers of Channel Islands Pride decided to “make history” with the first live concert held across both Jersey and Guernsey.

The free concert, running from 15:00 to 21:00, will be livestreamed from the St. James Centre in Jersey, and the Princess Royal Performing Arts Centre in Guernsey, on ChannelIslandsPride.org and the Channel Islands Pride official social media accounts.

The event will culminate at 20:00 on Saturday with a performance by MadHen, a five-piece party band from London, who have previously supported Take That.

In Guernsey, the acts will include the Rainbow Chorus, an inclusive choir run by Liberate, and singer Eloise Fabbri.

In Jersey, there will be performances by funk and soul band Brick House, soloist Rich Allo, and the brand-new female vocal group Siren.

The local performers will also include duo Shea and Kingsy, who have combined their respective and diametrically opposed styles to create songs.

“I create dark pop music, with kind of a nightmare vibe - I am the supervillain of my story!” Kingsy said.

“I write pop songs, R’nB and pop are kind of my style,” Shea added. “If Kingsy is the super villain, I am the hero. My songs are not very dark, they are quite poppy and upbeat!”

The pair wrote their first song, ‘Superstars’, the first time they met in 2019. It was originally due to be performed at Guernsey Pride last year, but the duo couldn’t travel there due to covid restrictions.

Instead, they produced a music video featuring other members of Jersey LGBTQ+ community, which was released online.

“We have lots of fun writing together,” Kingsy said.

“Kingsy has really build my confidence,” Shea added. “I am trained as an actor and I had no experience in singing - he gave me the confidence to know that I can do it.”

When the pair were asked to perform at this year’s pride, they started “building ideas” using their theatrical backgrounds to create “a massive set that people are going to love."

“We will go big or we will go home,” Kingsy said.

“We are both very ambitious musically and visually,” Shea said. “When we were asked to do the set, we knew we were not just going to stand and sing, we have dancers, props.”

Kingsy, who is a drag queen, will perform in drag as ‘Kiki’ and the pair has enlisted the help of three dancing friends - Veronica Fulton, Kirsten Chapman and André Rodrigues – for the set, which will include the songs they collaborated on as well as their own offerings.

Pictured: Kingsy will be performing in drag as 'Kiki'.

“I have stopped seeing them as individual songs because there’s a thread running between them,” Kingsy said. “We have created a narrative for the entire show - it’s like a creative musical without characters. The dancers have worked really hard and they are insanely good."

“I am used to rehearsing plays and musicals that other people have written. It’s the coolest feeling to have trained dancers create choreography, really cool high-quality choreography to your song, it’s the best feeling," said Shea.

While the duo was looking forward to performing their set in person, they are both happy that organisers were able to offer Pride through the camera.

“I am ready for my close-up,” Shea joked, “It’s just different - you cannot beat a connection with an audience, it’s amazing, it does not matter the size, even in intimate shows."

However, he noted: “Technology has been a massive way for people to communicate in the last year. If we are able to use that to share it with people, it’s great, sometimes you can even do more with technology.”

“It’s not going to be the same, it’s going to be different than having a live audience but it’s something we can work with,” Kingsy said. “All of us have done things with cameras, we know what we are doing! It’s really exciting!”

Ahead of the concert, Shea also wanted to remind people of the importance and significance of Pride for members of the LGBTQ+ community in Jersey but also further afield.

“I have had quite a few conversations with people about why there’s a pride, why there isn’t a straight pride, and I feel like if people are kind of questioning whether to tune in and the reasoning for pride, we have to remember we are super privileged to be brought up in a place where we can be ourselves, even though we have both faced challenges ourselves and the rest of the community have in varying degrees.

"Even if we do not see the extreme reactions that we see in other countries, it’s important to keep the visibility and keep the support for the community really visible. I would encourage everyone to tune in and celebrate our wonderful LGBTQ+ community.

"I think people see rainbows and unicorns and think it’s a bit much but it’s because we have to celebrate to the extreme until it becomes normality!”

For those keen to learn more about the background to Jersey's Pride celebrations, the IoD's Road to Diversity podcast has released a special with organiser Christian May.

He discussed how pride began as well as what Virtual Pride will look like and what's in store for virtual attendees.

Christian also talked about his personal journey and how senior openly gay senior civil servants are working towards Government of Jersey becoming a more inclusive workplace.

At the age of 12, Phoebe Over received a guitar, which inspired her to transform her love of music into songwriting just two years later.

“I taught myself some songs through YouTube and the guitar tabs app,” she said. “Then I started writing songs about my friends and their problems, which started as a joke but now they all love when I try write about their stuff as it’s so relatable!

“I’ve always loved music. I’d always dream of being on X Factor when I was younger and would sing on Sing Star with my brother! It just developed from there I think. I used to think guitar was so cool.”

After a couple of years performing her songs on the local scene, Phoebe finally released her debut single, ‘Rehab’, inspired by her feelings of obsession for someone.

“I sat down one day, I was feeling pretty sad and set a 20-minute timer to write a song,” she explained. “I felt like I was obsessed with someone and at the time, it felt like I was addicted to speaking to them, meeting them etc.

“I thought about what was relatable and what that addiction felt like. I realised that I could relate that to drug addiction, and it just formed from there.”

Pictured: Phoebe on stage with the Songwriters' Society.

The young singer-songwriter said she was “super nervous” about what reception the song would get. However, excitement took over.

“I’ve wanted a song out for so long,” she said. “It’s nice to have something to reference when people ask where they can hear your music.”

Phoebe is now working on another single as well as an EP to be released soon.

“I haven’t got a release date yet as I’m a perfectionist and want all the songs to be exactly how I imagine them, but hopefully not too long,” she said. 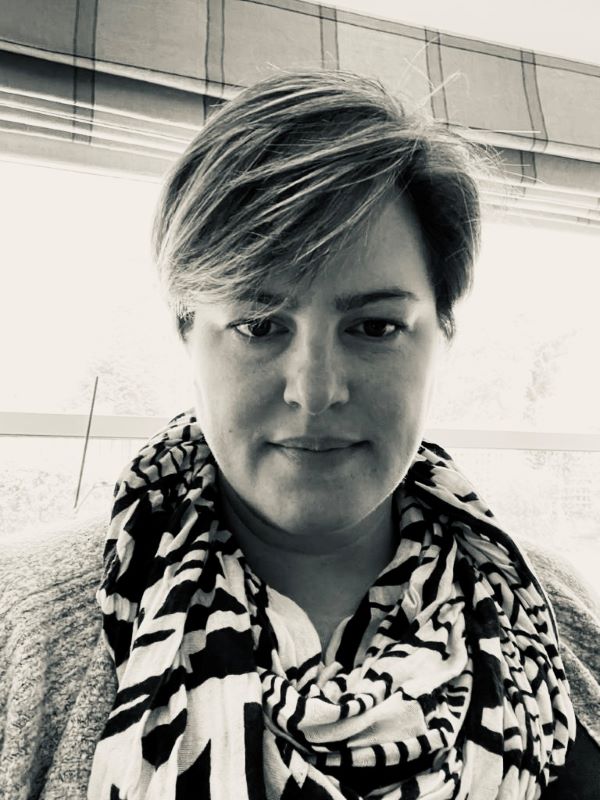 Leithe Gie will be presenting a selection of her works at the Greve de Lecq Barracks this weekend (Saturday 21 and Sunday 22 August) as part of ArtHouse Jersey's pop-up exhibition series.

Born and raised in South Africa, she moved to Jersey in 2019, having never visited the island before.

Drawn to nature and the play of light and shadows, Leithe tries to portray as much depth and contrast to create beautiful drawings with charcoal.

The artwork in the exhibition was inspired by the play of light in nature, which can be the simplest thing, as Leithe said.

“If you think of those moments when the leaves of a tree move in the wind and sunlight flashes through, or the setting sun catches the tops of the waves and shining gold. Rays bursting through heavy clouds and shadows falling onto a face,” she said. 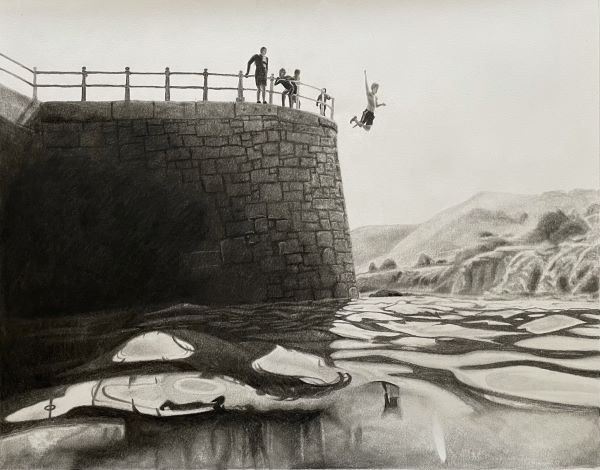 Pictured: The work on display show the play of light in nature.

“These are all little moments of brightness that particularly in these trying times I love to notice.

“Using charcoal means that I am limited to just black, white and grey tones so focusing on those flashes allows me to show real depth and interesting shapes and patterns without missing colour. I am able to show a little of the drama of the natural world because of the sharp contrast created by light.”

Leithe said the work on display will show the “broadest range of subjects”.

“People will see my love for the ocean, nature and light and hopefully it will make them notice these moments for themselves,” she said.