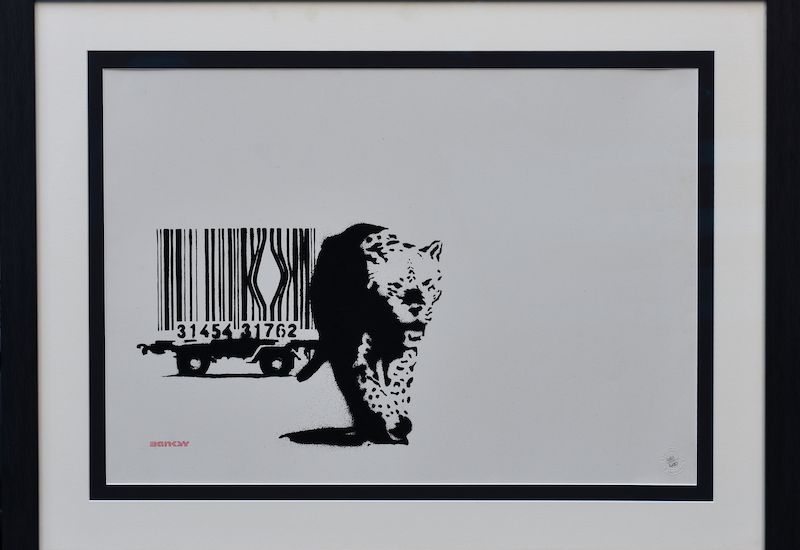 A Banksy print that went under the hammer in a Channel Islands auction house this week has sold for nearly double its original asking price.

The 'Barcode Leopard' print was auctioned off yesterday at Martel Maides in Guernsey, with fine art experts setting a starting price of £8,000.

In the end, it was sold for £15,000 to a bidder who faced competition from potential buyers in person and over the phone. It also attracted a worldwide online audience.

The print, which was the 461st edition in a run of 600, was not signed by Banksy, but marked with a red 'Banksy' stamp.

In an exciting first for Martel Maides Auctions we have a late entry in next week's sale - Banksy - Barcode Leopard 2004 - together with the Pest Control Certificate of Authenticity - estimate £8000-£10,000 pic.twitter.com/k9V4qg47sS

There were a number he did sign, and then 600 were stamped. Each print, including this one, comes with a certificate of authenticity - a Pest Control Certificate - which is torn in half, with the other half kept by Banksy's handling service, Pest Control.

James Bridges, Martel Maides' Director, said that the print ended up at the Guernsey auction house "very literally... by chance".

"A man called in through the door," Mr Bridges explained.

The first time @MM_Auctions have offered a Banksy for sale, garnered much Press and TV coverage and attracted several serious bidders both online and locally. For sale this Thursday morning at Cornet Street Auction Rooms.
https://t.co/EqAxKqyiYc pic.twitter.com/835THcByfm

"He came in and said he had a Banksy print, and asked if he could put it in the fine art auction.

"This is the first time we have had anything from Banksy, we don't get that much contemporary art in, and with Banksy being probably the best known contemporary British artist, it was a really good opportunity."

Pictured top: The 'Barcode Leopard' Banksy print that went for £15,000.