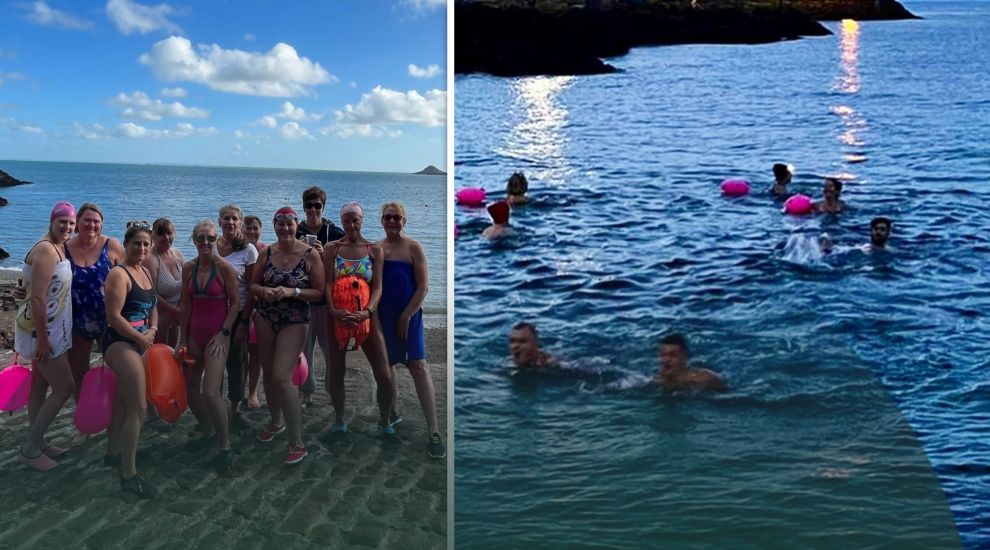 Wrapped up in colourful robes and donning bright swimsuits, a group of female swimmers founded in the midst of lockdown has been making waves in Bouley Bay...

The ‘Bouley Belles’, as the group is known, started with half a dozen in April 2020 and has since grown in numbers, with 15 Belles taking to the water on a recent swim.

Alison Salisbury Keogh, a 56-year-old primary school teacher and Honorary Police Officer, was one of the founding members of the group, and even helped naming it, although she admits there is no imaginative story behind the name. 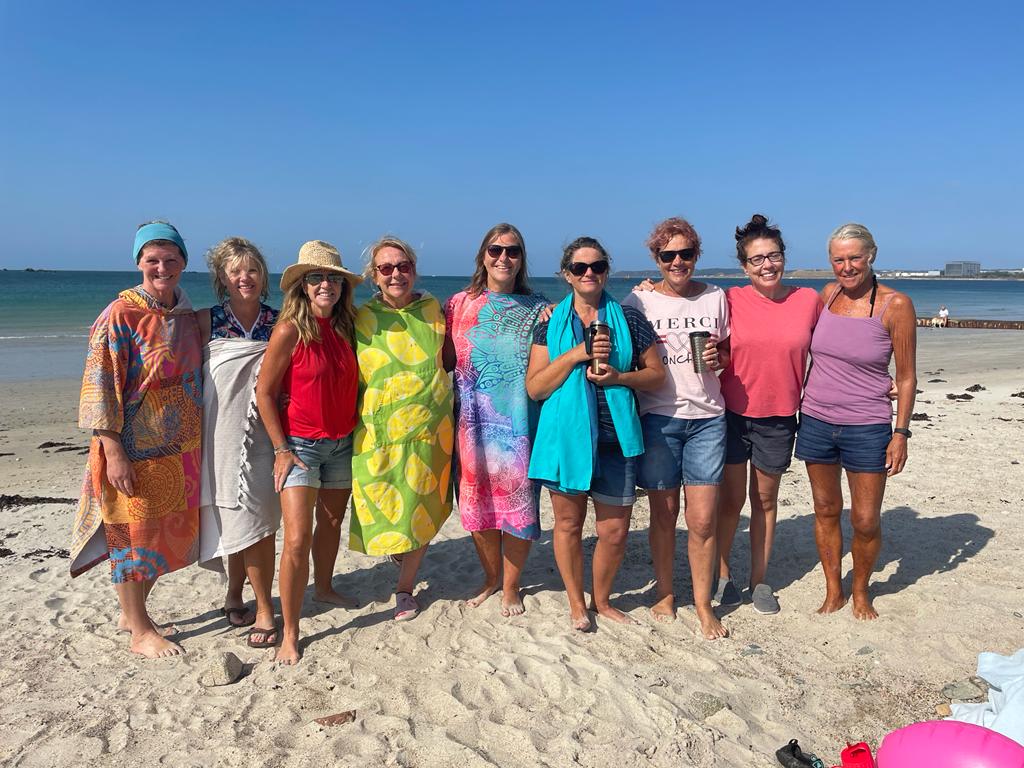 Pictured: Alison (fourth from the left) with some of the Belles.

“The name came about because it was originally just called swimming group, I was sitting at Bouley Bay that first early summer and the name just came to me,” as she explained.

Whilst she has always been swimming in the sea, it wasn’t until two and a half years ago that Alison found a tribe to swim with. “As covid had put us into lockdown, half a dozen of us had an early April swim,” she recalled. “It meant we could meet socially distanced swim and chat. Looking back, we now realize what strange times we were in, some of us key workers, some trying to work from home, some not working but all trying to cope the best we could, the sea gave us normality in abnormal times.”

Over the last two-and-a-half years, the group has grown but Alison said it has remained “informal and inclusive” and whilst it is named after Bouley Bay, the belles “occasionally venture elsewhere”. 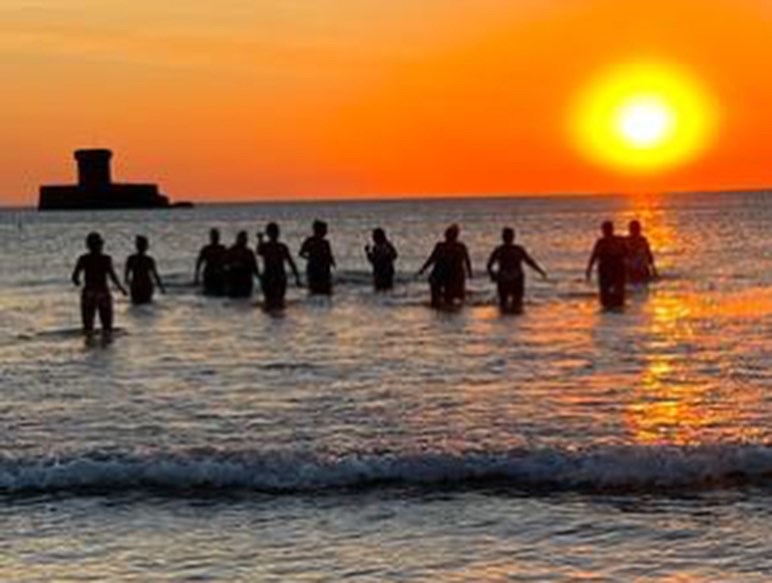 “Our mantra is ‘no one need swim alone’,” Alison said. “We are very welcoming and are always growing in numbers. Some swim mornings, some of us after work, which can get more challenging with dark evenings and cooling temperatures.”

“We all swim together one evening a month to celebrate the full moon,” she continued. “We share biscuits cake and life, enjoying each other's successes big and small - we have a London marathon runner and a channel swimmer amongst us - as well as supporting each other through life's more challenging moments.”

While the benefits of sea swimming are numerous and well-known. Among other things, it boosts the immune system, improves circulation, and reduces stress as well as anxiety and dementia. 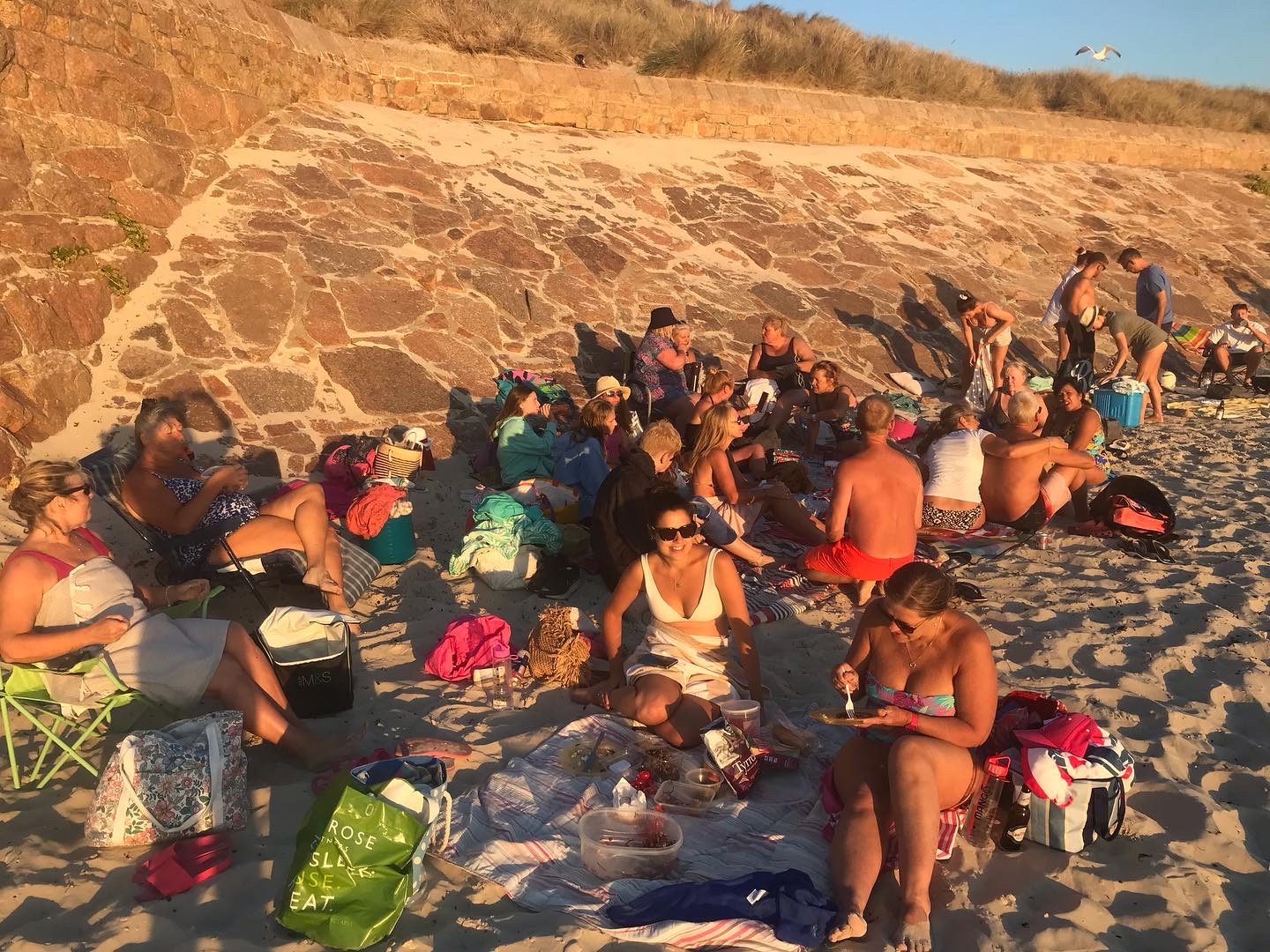 Pictured: After a swim, the group gets together for cakes, coffee and a chat.

But for the Belles, they are “so many positives” to the swimming group, with “the sense of belonging, the community it brings, the camaraderie, the sheer joy in celebrating everyone’s successes no matter how small” cited very often – along with the option of “chats and laughter over a coffee or tea and cake after a swim”.

“Going in the sea gives me a quiet space, where other complications in my life can't touch me,” one of the Belles said. “If I choose to allow them in, the stress or worry will float away a lot quicker than on land. It’s a true safe space, but I also know there will  be companionship, on many different levels, from the smiles and hellos from other unknown swimmers to the friendships old and new.

“It’s a really welcoming community, and the swimming also eases physical aches and pains, and relieves stress, at least for me.” 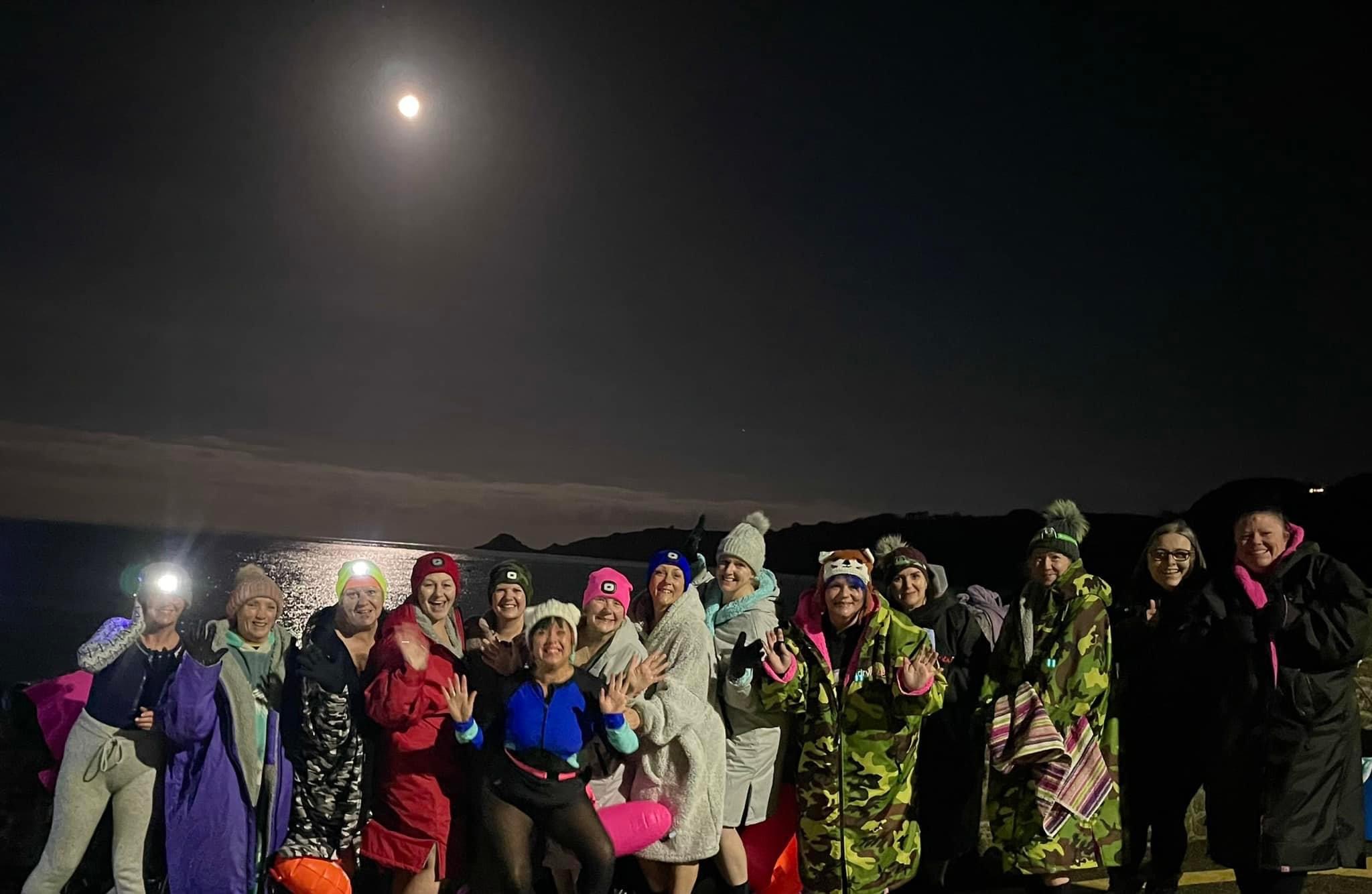 Pictured: “We all swim together one evening a month to celebrate the full moon,” Alison said.

“I love that we’re all so different but it’s the common love of the sea which brings us together and connects us,” another said.

Describing the group, another swimmer said: “A group of lovely ladies of all ages who are welcoming, non-judgemental, encouraging, fun, supportive, enabling people to enjoy a hobby which helps your mental health, vitality, fitness, wellbeing and to never be alone.”

Another explained how the Belles had helped her develop a relationship with the sea she had never thought possible. “It’s opened something up into my life that I am so grateful for,” she said. “My mental health has improved, I have conquered and achieved things I never thought I ever could, and I am very grateful.”

As Alison mentioned the Belles celebrate each other’s wins, big and small, as evidenced by the group’s marathon runner who commented: “Personally, it really touched my heart how much support everyone gave when I did the marathon and how you followed my journey, literally!” 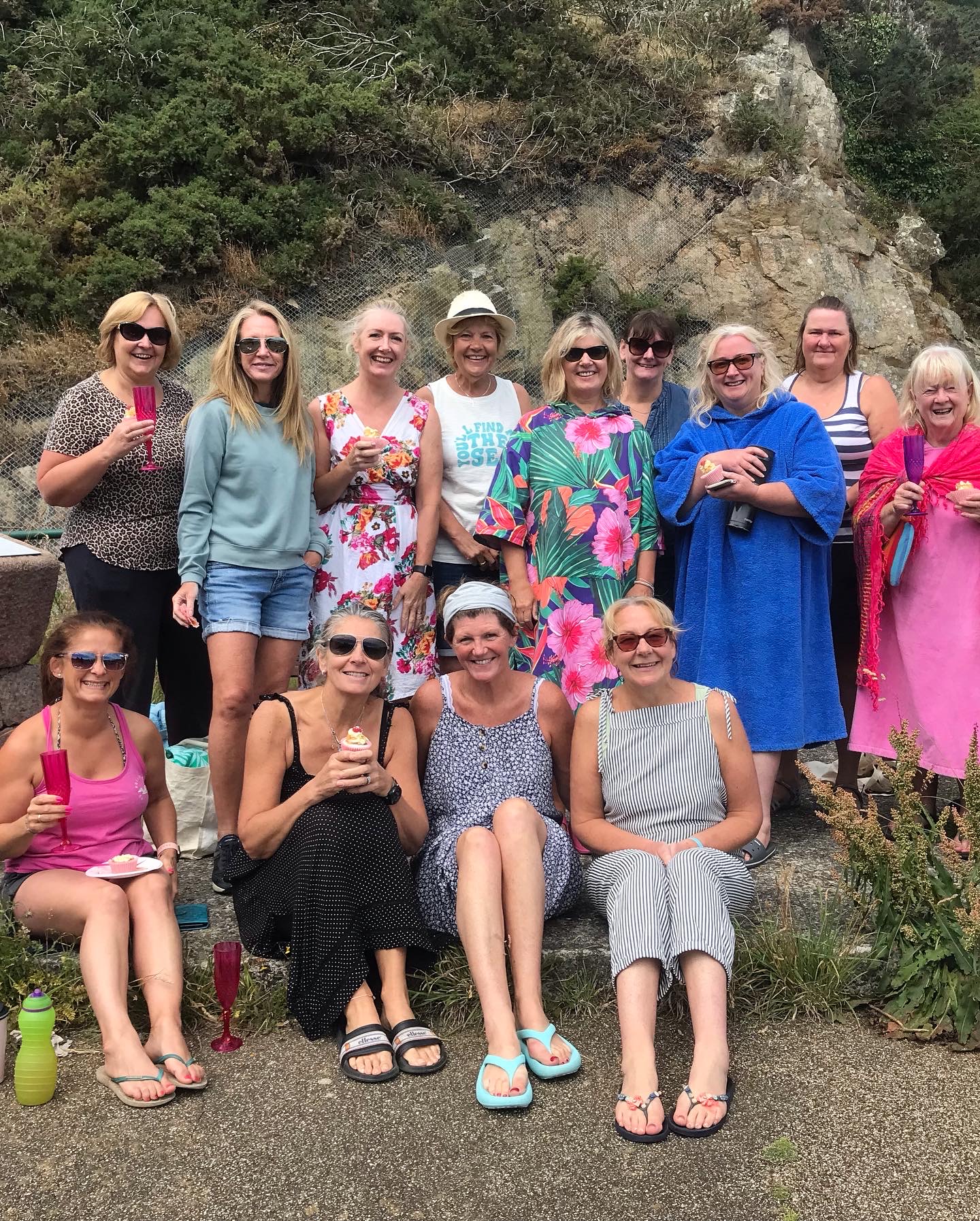 Pictured: Alison's favourite thing about the Belles is "the amazing sense of community and inclusiveness".

“I love being a Belle because all the girls are a wonderful group of like-minded ladies who are caring and interested in each other, fun to be with and genuine warm-hearted human beings,” another said.

This article first featured on Bailiwick Wellbeing, your free weekly guide to wellness in work and island life. Sign up now here. 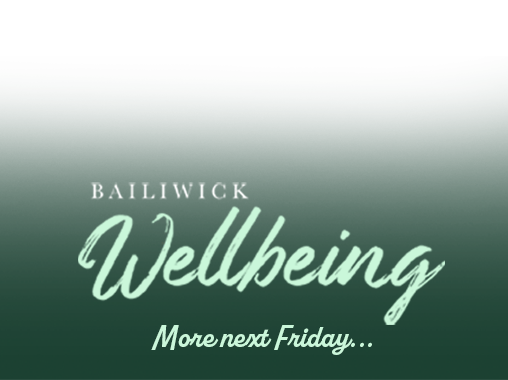