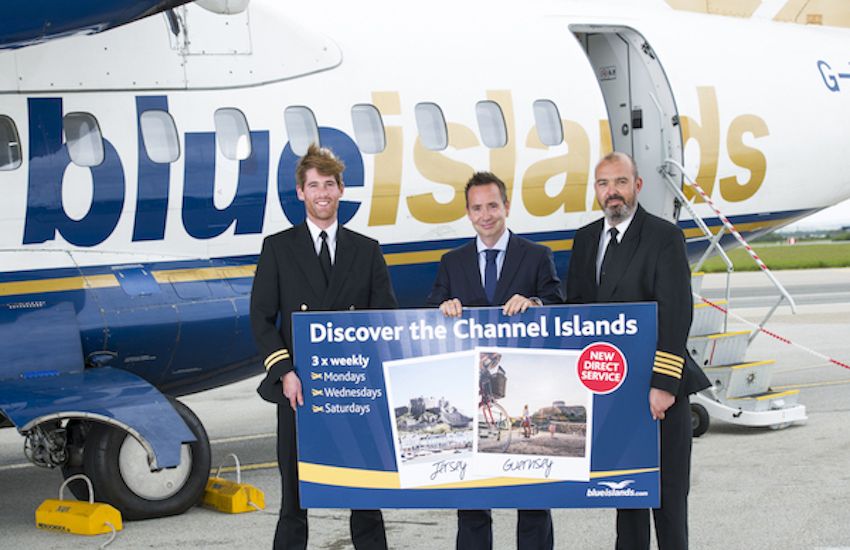 Blue Islands was put up for sale last year, and a decision to issue media statements suggesting the opposite was a “mistake” in the eyes of its director, High Court documents detailing a £150,000 lawsuit against the airline allege.

Barons had been seeking £150,000 it said it was owed by Blue Islands – or for the sales process to start again.

In a statement issued this morning, a spokesperson for the airline said: “Any dispute has been settled”. However, they did not confirm how the matter had been resolved.

Obtained by Express, the court documents allege the firm was engaged in March last year to help explore options “for the sale of all [the airline’s] outstanding shares or any other transaction having substantially the same objective”.

Once agreed that the firm would become Blue Islands’ “exclusive” corporate finance advisor, the firm says it made visits to Guernsey, requested and reviewed information about the airline’s operations, and produced a financial model and summary Information Memorandum.

But that preparatory process was reportedly abruptly grounded mere months later when Tim Coates – son of the airline’s Director, Derek – announced in July that it was “business as usual”.

In a statement repeated to Express in September, he added that, rather than being sold, Blue Islands was continuing to “invest in the next exciting phase of the airline’s expansion”.

This, Barons claimed, breached part of Blue Islands’ agreement not to issue press releases that would “undermine” any sale, and breached their obligations of “good faith”.

Just weeks later, the airline was then alleged to have contacted Barons, calling for a “12-month hiatus to the sales process”.

Both acts, Barons claimed, effectively terminated their agreement with the airline, and triggered a £150,000 “Breakaway Fee”.

According to the court documents, Tim Coates later acknowledged the media statement was a mistake in a telephone call.

A note of that conversation, which Barons said was tantamount to an admission of Blue Islands’ alleged contractual breaches, was submitted to the court.

Accusations of failing to properly engage with the financial adviser were also levelled at Blue Islands.

Barons said it “continuously” failed to respond to “reasonable” requests for information, noting: “There was a lack of ongoing information provided to the Claimant… and no invitation extended to the Claimant to attend meetings with competition lawyers, Aurigny, and Stobart, and no updates of the same promptly or at all.”

Such requests included details of auditors, legal advisors, financial models and permission to send a draft letter to Aurigny. The content of that letter was not revealed in the court papers.

In total, Barons said Blue Islands had paid it £25,000 upon signing the agreement, £5,000 as an advance payment for reasonable out-of-pocket expenditure, as well as other expenses on production of invoices, and £7,000 for a retainer in May, June and July.

However, given the alleged effective termination of the agreement, the company said it was still owed “the sum of £150,000” or damages plus interest and a fixed sum of £100 plus reasonable costs in recovering the sums due, and its legal fees.

Alternatively, the firm also said it would accept a “declaration that the Defendant is liable and shall pay the Claimant a success fee… in the event that the sale of all of the outstanding shares of Blue Islands and/or any other transaction having substantially the same objective, is completed within a period of time to be specified by the court.”

CLICK BELOW to read the High Court papers in full…